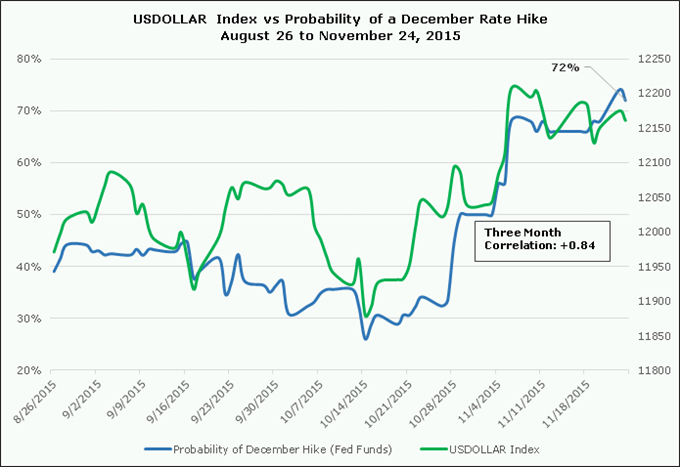 - Heightened probability of a move in December has been driving the US Dollar.

- Rising short-end US yields have supported recent greenback gains versus the Euro.

Rate Hike Expectations Have Been Driving the US Dollar

The moment may finally be approaching: when the Federal Reserve begins the next stage of its policy normalization process and raises interest rates for the first time in almost a decade. Without mincing words, the process of the December rate hike being priced into markets has been nothing but the most significant tailwind for the US Dollar in recent weeks:

Chart 1: USDOLLAR Index vs Probability of a December Rate Hike

The above chart passes both the not-so-scientific eye test (which can be very misleading, given a manipulated Y-axis – but not in this case) as well as the more rigorous and mathematical correlation study, which yields a significant +0.84 correlation between the USDOLLAR Index and the implied probability of a Fed rate hike (per the Fed funds futures contract) over the past three months. It’s not a far leap to suggest that the US Dollar’s broad strength between now and December 16 hinges on rate expectations remaining elevated.

Whether or not they stay elevated is a different story, but we’re concerned with the source of these rising rate expectations (as the above chart is merely a proxy for underlying market currents). Indeed, US yields themselves have been rising across the term structure, reflecting the expectation of higher rates on the horizon:

Chart 2: Nominal Change in US Yields 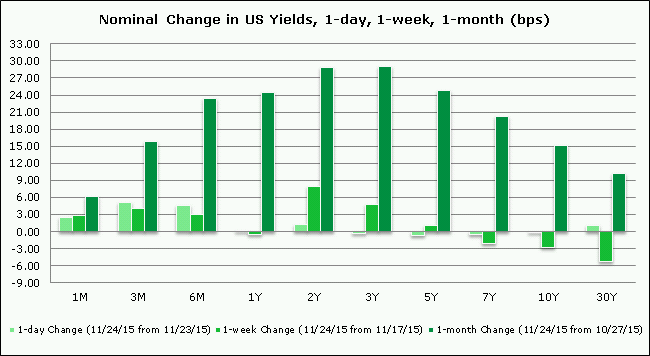 The biggest rate rises have been seen on the short-end and into the belly of the yield curve, with the 2Y, 3Y, and 5Y notes showing the largest nominal increases over the past month (right when the European Central Bank laid the groundwork for a deposit rate cut at its December 3 meeting). These moves have corresponded with widening interest rate differentials in favor of the US Dollar. As of market close last week, the spread between the US Treasury 5-year note yield and the German 5-year bund yield widened to its widest level since 2005 (150-bps): this is the most readily available evidence of the Fed/ECB policy divergence on approach to their December meetings, and supports EUR/USD’s recent sustained move below $1.0700.

If these have been the conditions for the US Dollar rally, then surely they will be critical in determining the future path of the greenback; it is logical to suggest that deflating rate expectations and thus narrowing interest rate differentials could work against the US Dollar. Right off the bat, this is a concern going into the December 16 policy meeting, as the FOMC has showed the proclivity to lower expectations for the policy of future rates at recent meetings featuring updated Staff Economic Projections – which the upcoming meeting will be accompanied by.

In just the past three meetings alone, we’ve seen the Fed start to lower expectations for the future policy path. For example, in the March 2015 Staff Economic Projections, the FOMC was looking at 1.875% as the year-end rate for 2016; by the September meeting, this forecast was lowered to 1.375% - one rate hike fewer than previously anticipated. Another downgrade to these expected future rates would very much be consistent with what the FOMC has done in the past few months. 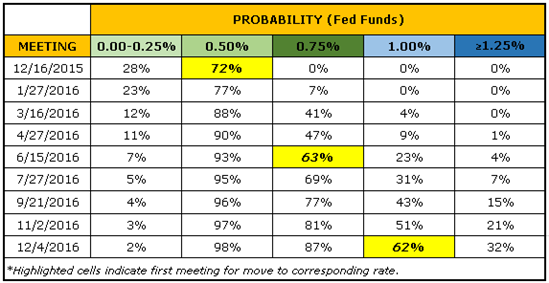 The projected path of future rates – the glide path – could be a significant factor in the market’s attempt to predict what the Fed will do in 2016. As it stands right now, markets (per the Fed funds futures contract) are pricing in a rate hike in December 2015, then twice more in 2016. Assuming that the Fed acts in December, markets are pricing in June 2016 and December 2016 for a 25-bps hike each, bringing the 2016 year-end expected rate to 1.00%.

As it stands, there are 62.5-bps between the market’s year-end 2016 forecast for the Fed’s main rate (1.00%) and the September FOMC projection (1.625%). Given the Fed’s tendency to lower the glide path as time marches forward, this divergence is likely to shrink – which means the Fed’s projections are going to be softer, undermining what’s been the key catalyst for the US Dollar’s strength the past several weeks: rising yields and interest rate differentials.

At this point, we know what’s been keeping the US Dollar moving forward in recent weeks – heightened expectations of a Fed rate hike on December 16 – and how the market has expressed this bias – by pushing the US-German 5-year yield spread to its widest level in a decade, and EUR/USD back towards its yearly lows. Whether or not the US Dollar can keep its bull run going in large part depends on if the Fed can keep markets pricing in widening interest rate differentials in its favor. Around previous rate hike cycles, this has proved difficult; the Fed has typically raised rates quickly, leading to a corresponding increase in recession risk, thereby reducing potential future growth and undermining expectations for further rate rises. Sometimes, these concerns prove well-founded:

Chart 3: DXY Normalized Around the Start of Fed Rate Hikes 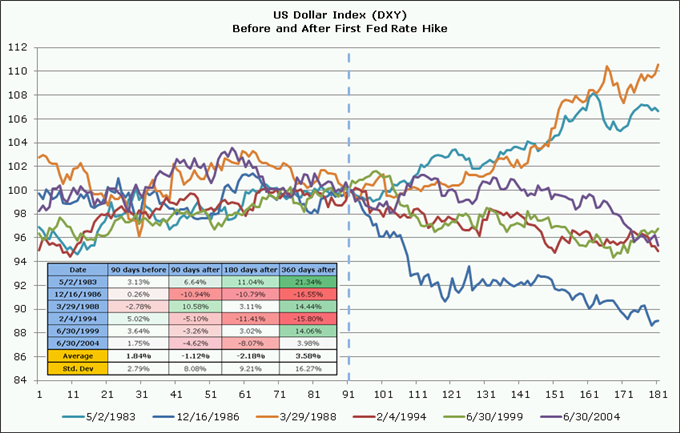 In both the 90-day and 180-day windows after the beginning of the hike cycle, the US Dollar has averaged a loss of -1.12% and -2.10%, respectively, in the six major hike cycles since 1983. However, the longer you move away from the beginning of the cycle, the more bullish it gets: 360-days after the first hike have produced average gains of +3.58% on average. The stability of the long-run forecast is in question, however, as the 360-day standard deviation is nearly double that of both the 90-day and 180-day periods (which are quite close). Collectively, history tells us that in the near-term, the US Dollar tends to decline after a rate hike, but once you move closer to the one year anniversary, it’s more of a coin-flip.

Table 3: Performance of DXY After Past Six Hike Cycles

General Observations Regarding the Past and the Future

There are some important differences to note between today and past hike cycles. The 360-day performance of the 1983 rate hike (+21.34%) came amid US GDP running at +5.63% in 1984; the 1986 performance circulated around the events leading up to the Black Monday 1987 market crash (a major concern at the time was the US trade imbalance with West Germany); the 1994 hike cycle coincided with the mid-1990s capital allocation out of developed markets and into emerging markets (culminating in the LTCM crisis); the rate hike cycle beginning in 1999 saw +175-bps added at the top of the tech bubble; and the 2004 hike cycle was initiated to confront rising inflation and was very much regarded with hesitancy as many believed it would choke off US growth.

None of these previous rate hike cycles bears resemblance to any of the other ones in terms of underlying economics or fundamental developments, and yet there is a seemingly clear pattern: across different time periods, the few months before the initial rate hike tend to be bullish for the US Dollar (something we’re presently seeing); and the first three- to six-months thereafter tend to be bearish for the greenback.

This is a unique period to begin raising rates, with each aspect today running counter to reasons why the Fed hike rates in the past. Unlike in 1983, US growth is growing at meager +2.1% annualized rate currently; unlike in the 1980s and 1990s, there isn’t a rush out of US Dollars and into foreign currencies seeking growth opportunities; and unlike in 2004, inflation is hardly a concern.

Therefore, with conditions so tentative, the Fed is unlikely to employ an aggressive strategy, and fitting in with their previous pattern of behavior, we would expect the Fed to exhibit this by reducing the glide path of its future interest rates. In doing so, it could hamper the recent uptick in US yields, especially in the 2Y to 5Y range, which have been the prime source of US Dollar strength over the past several weeks.

Until the Fed meeting on December 16, it is crucial for traders to continue to track the Fed funds futures contract to see where the US Dollar may be heading. Thereafter, it all depends on incoming data. Given how soft data (outside of labor figures) have been, asymmetrical risk to the downside may be rapidly growing for the US Dollar. There may be one more rally left in this US Dollar bull cycle, but from the onset, it seems unlikely that it will begin on December 16.

Historically, these types of low liquidity environments can result in sporadic price movements, which could result in brokers - FXCM or otherwise - having to raise minimum margin requirements to cope with changing market conditions. Traders active in the market over the coming weeks - especially around the ECB on December 3 and the Fed on December 16 - might find it beneficial to use the "market range" feature when placing a market order to determine a comfortable range of prices where the order can execute. Currency Analyst James Stanley recently discussed potential pitfalls facing markets into year-end in his article, "The Top Three Risks Facing Global Markets Right Now."