EUR/USD Rally Buffed by Decline in European Equities - Why?

- PBOC devaluation of the Yuan is provoking risk-assets to sell off globally.

- EURUSD shorts are being lifted as European equity markets decline.

At heart, the Euro is a funding currency. Investors are using it as a vehicle to operate in other asset classes. Look no further than the performance of inverse EURUSD (USDEUR on the chart below) versus the German DAX since the middle of September 2014 - right after the ECB pushed its interest rate corridor into negative territory. 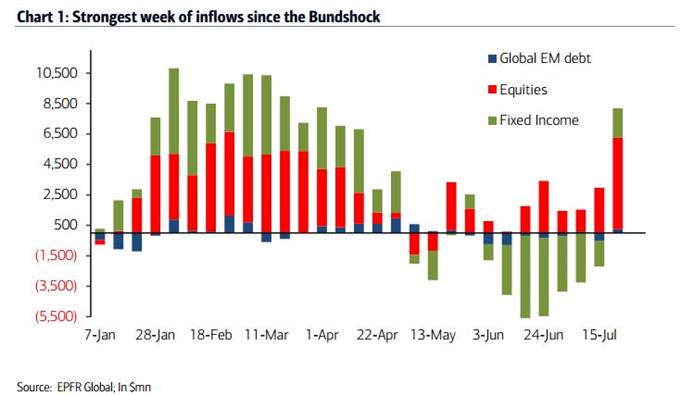 This trend of capital pouring into Euro-Zone equity markets has continued throughout 2015, with inflows jumping once more over the past few weeks.

Foreign asset managers placing capital in European equity markets necessarily have to hedge their long Euro-Zone equity position with a short EUR position. For example, if a US fund manager invests in the German DAX, she must first convert USD to EUR, then uses the EUR proceeds to invest in the German DAX. If German DAX appreciates by 10% and EURUSD depreciates by 9% (or more) over the same period, then the actualized returns are eliminated (or a loss occurs). In effect, foreign investors must hedge long Euro-Zone equity investments, so that they don't get burned on FX conversion when they want to sell their positions.

What's happening right now? Global risk assets are selling off due to concerns surrounding China. Long Euro-Zone equity positions (like the DAX) are liquidated, and short EUR hedges are lifted. EURUSD is squeezing higher as a result.