- August has been a poor month for EURUSD, GBPUSD during QE era.

For August, we continue to focus on the period of 2009 to 2014. The small sample size is not ideal, and we recognize that there is increased statistical stability with using longer time periods. However, because of the specific uniqueness of the past six years relative to any other time period in market history - the era of quantitative easing - we've elected to attempt to increase the stability of the estimates with the shorter time period. 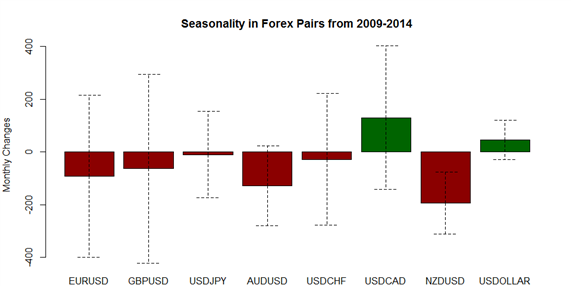 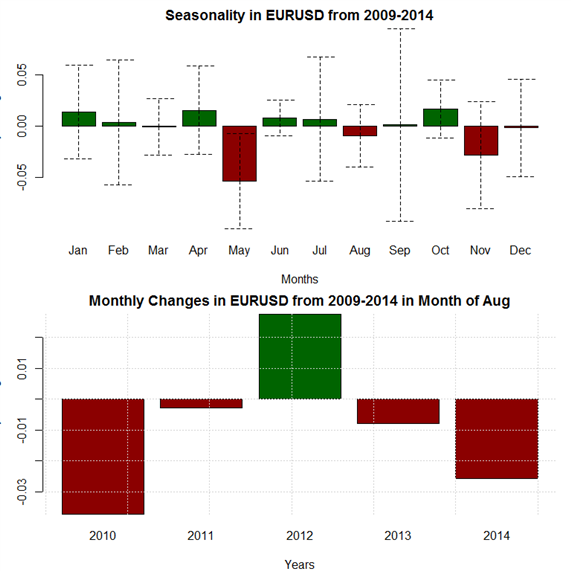 The Euro has lost ground to the US Dollar in August in four of the last five years, with the second largest loss over that span coming last year. While the performance dispersion suggests a wider price range than in June, but more constrained than what’s typically been seen in July or August, we’re only expecting modest losses to occur. EURUSD has followed its QE-era seasonal tendencies closely thus far this year; and a continuation of this pattern would likely see EURUSD decline to fresh Q3’15 lows below $1.0800. 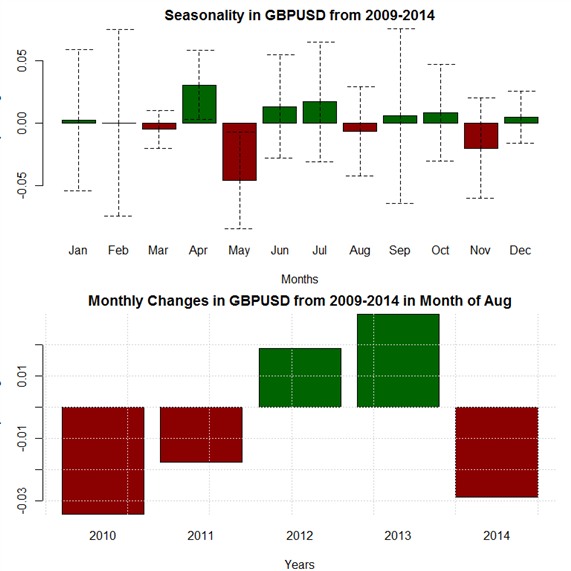 Similar to EURUSD, GBPUSD has seen modest losses develop in August during the QE era, but prices have tended to stay in a smaller range than in July or September (volatility across assets tends to decline in August due to the summer holidays). While GBPUSD may not have a strong seasonal tendency here – losses have come in three of the past five years, and the average loss has only been -64-pips. 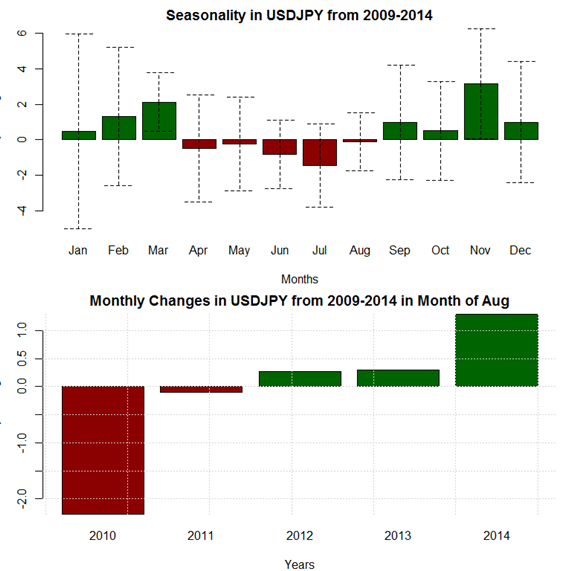 Our seasonal forecast for USDJPY in May is neutral, if not slightly negative. The average performance calls for lower prices, although gains have materialized in the last three years; the average performance is dragged down by significant losses in 2010. USDJPY is at the end of it “bearish” stretch of the year, which has typically lasted from April to August during the QE era. 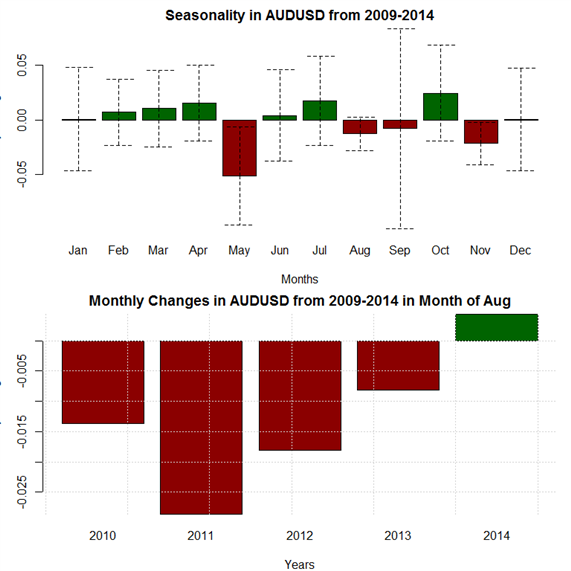 August has been the third month of the year for Australian Dollar during the QE era. Last year was an outlier, with a slight gain; but the preceding four years produced significant losses. Something to keep an eye on has been the change in trend since 2011: losses have been less extreme, and a gain actually materialized. A small loss, in conjunction with seasonal trends across the USD-spectrum, see likely for AUDUSD. 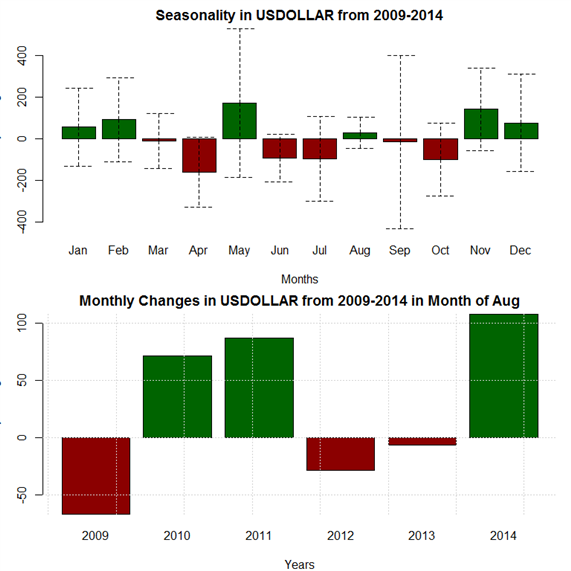 August has been a positive month (but only meagerly) for the USDOLLAR Index (an aggregate of EURUSD, GBPUSD, AUDUSD, and USDJPY) during the QE era. After two consecutive losses in 2012 and 2013, August 2014 posted the best single month performance of any August over the prior five years. Given the breakdown of the individual components of the index, we’d expect more modest gains relative to August 2014 to develop this year. 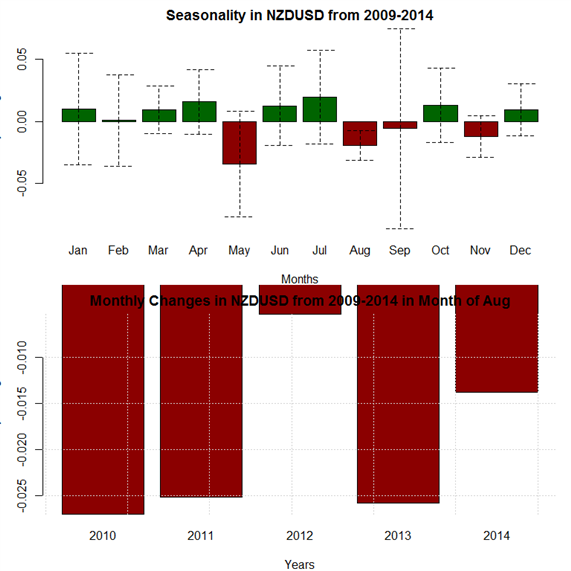 August has consistently a poor month for the New Zealand Dollar during the QE era, with losses coming in each of the past five years. Overall, August has been the second worst month of the year. Last year’s performance was in the middle of the pack, with the worst losses coming in 2010 and 2013, respectively. There has been consistency in the weak performance of NZDUSD during the QE era, and seasonally, there is little in the way of a sixth straight year of losses. 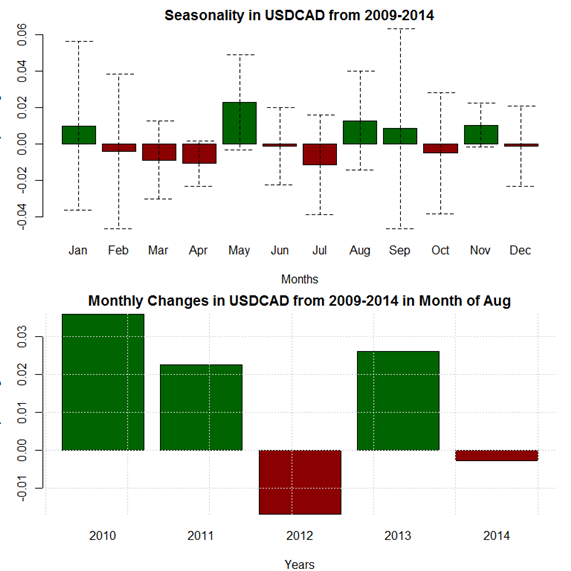 With gains coming in three of the last five years, the average performance for USDCAD has been skewed positive in August. Although losses developed in 2012 and 2014, August has typically been the second strongest month of the year for USDCAD in the QE era. Volatility may start to rise towards the end of the month, as September has produced the largest range of any month during the QE era. 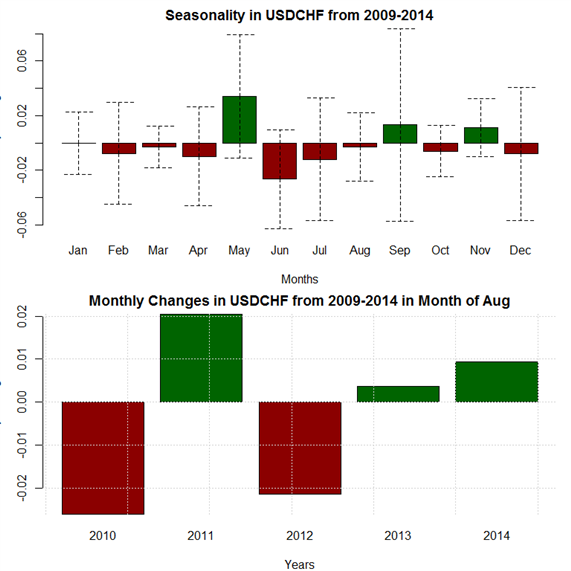 Like the other USD-pairs, USDCHF has typically seen a smaller range during the month of August over the past six years. Although gains have materialized in three of the past four years, average performance has been slightly negative during the QE era. Taking into account our EURUSD forecast, a more neutral forecast may be deemed appropriate for USDCHF. 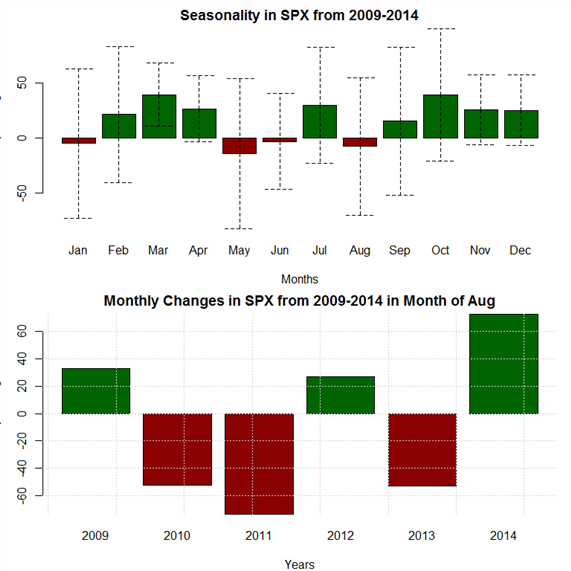 ‘Sell in May and go away?’ That’s what we typically hear at the start of the summer months, as investors have picked up on the trend of US equity markets stalling mid-year. This year has been no different: the S&P 500 ended April at 2108, and started August at 2106. If mid-year is truly the bearish stretch of the year, then we may see a bit more sideways or downside price action proliferate the next few weeks. 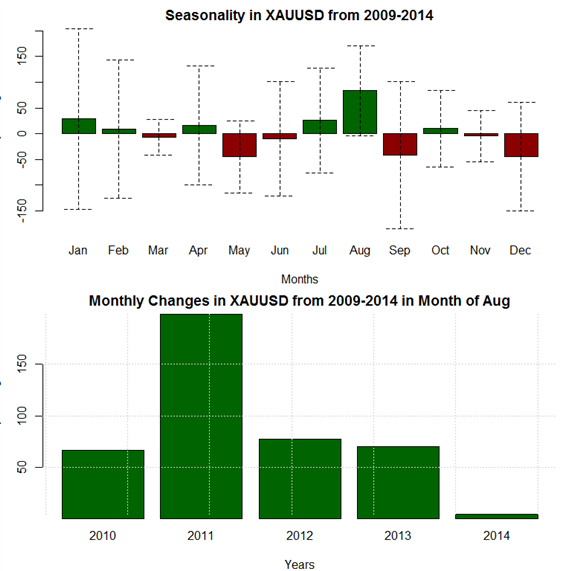 The Gold-USD relationship the past few years has been fairly straightforward: as the US Dollar has strengthened since its 2011 lows, Gold has weakened dramatically from its 2011 highs. It may come as a surprise then, that in a month where the USDOLLAR Index is expected to move higher, that Gold is expected to move higher as wel. In fact, August has been the best month of the year for Gold during the QE era. The bias is due to strong gains between 2010 and 2013, as 2014 produced the first loss over the last several years.