June Forex Seasonality Sees USD Easing Off after Stronger May

- June has been a good month for GBPUSD, NZDUSD during QE era.

For June, we continue to focus on the period of 2009 to 2014. The small sample size is not ideal, and we recognize that there is increased statistical stability with using longer time periods. However, because of the specific uniqueness of the past six years relative to any other time period in market history - the era of quantitative easing - we've elected to attempt to increase the stability of the estimates with the shorter time period. 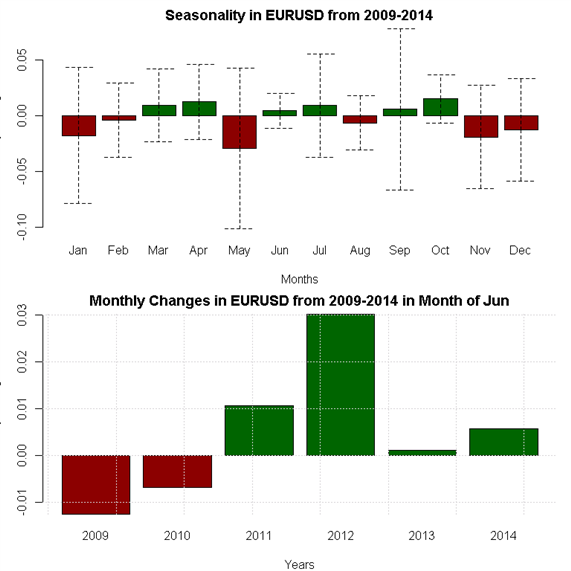 The Euro has gained ground against the US Dollar in June in each of the past four years, although the gains in 2013 and 2014 were modest at best. June represents the halfway mark during EURUSD’s bullish stretch of the year (March through October, where six of eight months have seen gains on average during the QE era). June has typically been a quieter month for EURUSD, it having produced the smallest range of any month during the year. Rangebound trading conditions seem likely to develop. The average gain for EURUSD in June during the QE era has been +47-pips. 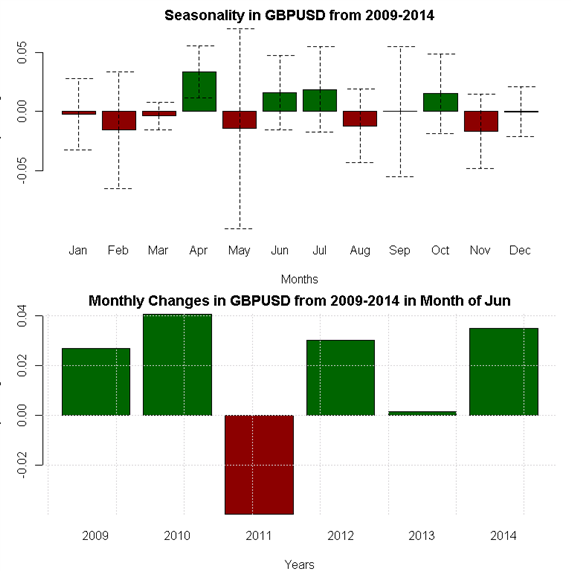 June is the second month in a stretch of three out of four bullish months for GBPUSD, spanning April to July. Gains have emerged in five of the past six years, with the only loss in June coming in 2011. The British Pound has been the best performing major currency against the US Dollar during June, even if June has only been the third-best month of the year for GBPUSD. The average gain for GBPUSD in June during the QE era has been +158-pips. 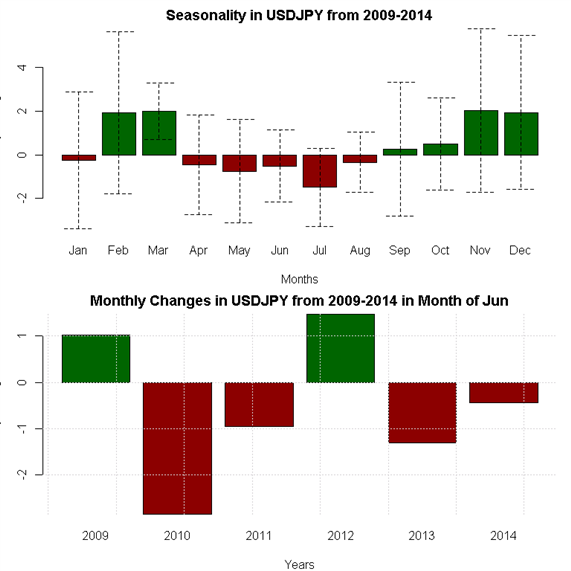 June is the midway point in the worst stretch of the year for USDJPY (April through August), and the sixth month of the year has produced losses in four of the past five years. Losses have been modest in nature, with USDJPY losing -51-pips on average in June during the QE era. In context of price action, the seasonal forecast may dampen USDJPY’s recent bullishness; early-month gains may cool off as the month moves forward. 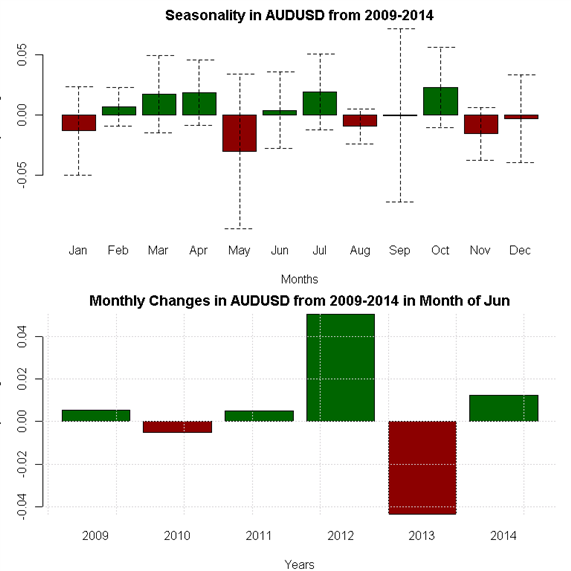 AUDUSD has rallied in four of the past six Junes, but the gains have been minor on average, leading us to a decisively neutral seasonality forecast. The pair has averaged a gain of +41-pips in June during the seasonality era, and the range of performance during the month is exacerbated by outliers in 2012 and 2013 (a gain of +504-pips and a loss of -433-pips, respectively). If AUDUSD is active this month, it will be due to broader USD flows, rather than due to endogenous prospects. 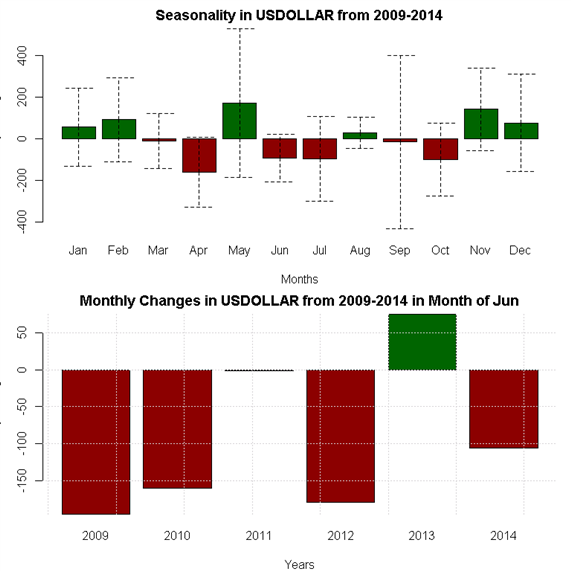 In a stretch of seven of nine losing months (March through October), June represents the forth-worst month of the lot during the QE era. June has produced a loss of -94.5 points on average, with the USDOLLAR Index having lost ground in five of the past six Junes. June has produced the smallest range of any month during the first half of the year, although with US economic data starting to turn the corner and speculation about the timing of a Fed rate hike starting to reemerge, volatility might be higher than usual over the coming weeks. 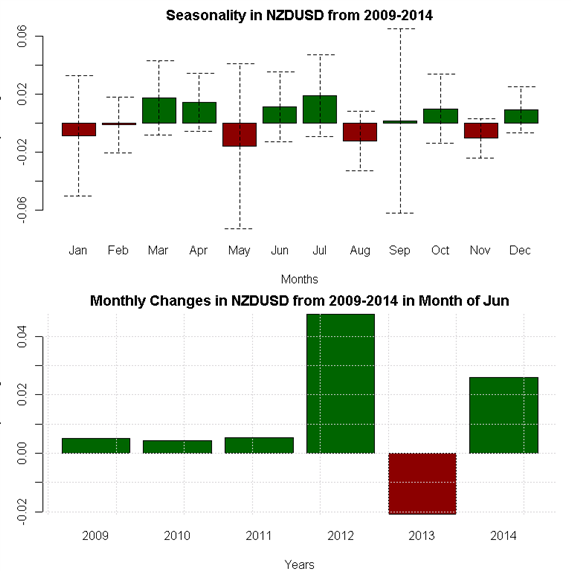 NZDUSD has typically fared well in June, having gained in five of the past six years on the way to an average gain of +112-pips. Volatility has picked up since 2012, although June’s historical price range doesn’t come close to what’s been seen historically in May. Among the commodity currencies, NZDUSD appears to be best positioned for outperformance as the first half of the year winds down. 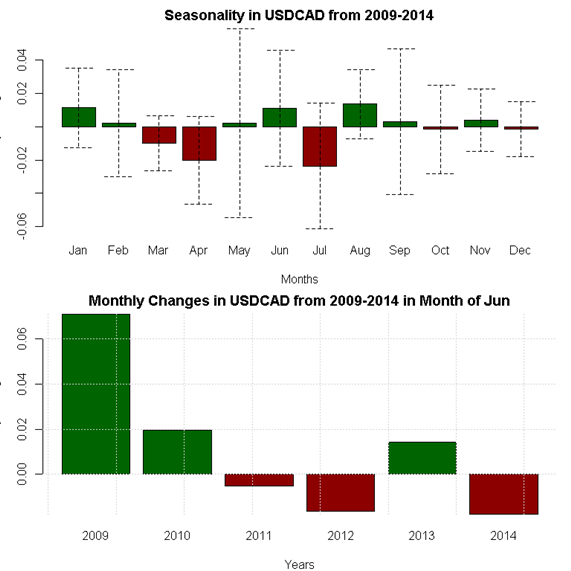 Although June has typically been a good month for USDCAD, losses have materialized in three of the past four years. Still, USDCAD has averaged a gain of +164-pips in June during the QE era, making it the lone outperformer among the USD-pairs in the sixth month of the year. Whereas June has been a disappointing month for the US Dollar otherwise, if the greenback performs well, it would seem that USDCAD would be one pair where that would be best exemplified. 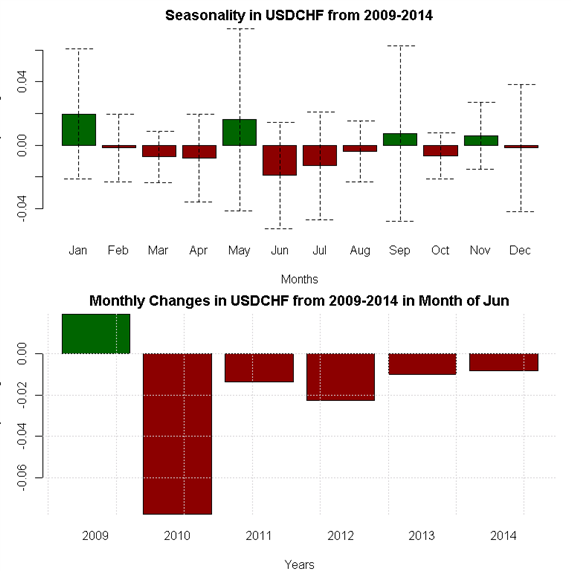 Basically a mirror of EURUSD, USDCHF has seen losses in each of the past five years during June, although the average loss since 2011 (-137-pips) isn’t as great as the average loss during the QE era on the whole (-189-pips). We’re in the midst of the bearish stretch of the year for USDCHF, which has seen losses on average from February through August, except for in May. June historically has been the worst month of the year for USDCHF. 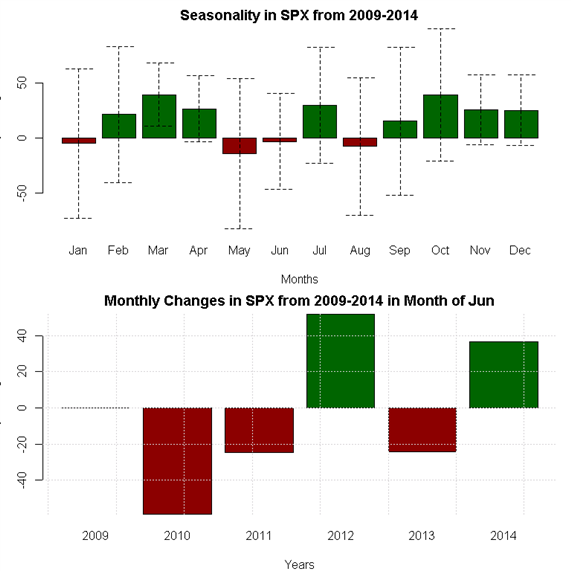 If there was a bearish part of the year for US equity markets in the QE era, we’re currently in the midst of it. May through August have been less than cooperative for investors during the QE era, although the average loss seen in June during the time period has been minor; it’s the smallest bearish month of the year. It is worth noting that the average performance of the S&P 500 is dragged down by a flat performance in 2009 and losses in 2010 and 2011; gains have come in June in two of the past three years at an average of +21.3 points. 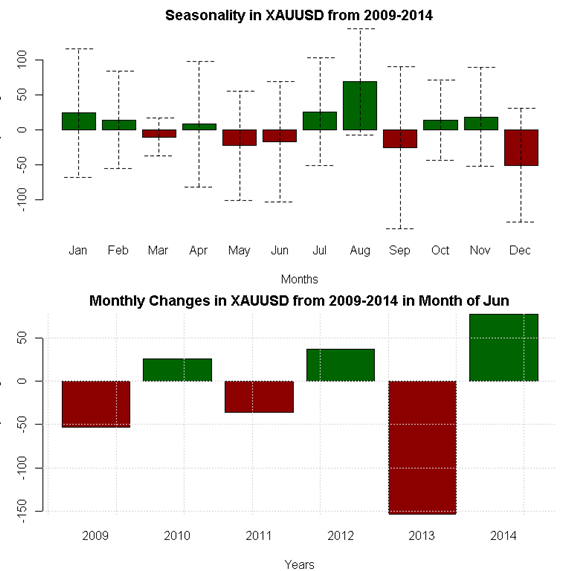 Even as the US Dollar has typically struggled in June, precious metals haven’t been able to take advantage of it. Gold (XAUUSD) has alternated between gains and losses going back to 2009, with an average loss of -$16.80 along the way. After the seasonally weak May-June period, precious metal bugs may be more optimistic about the summer months, with July and August having been the best months of the year for precious metals during the QE era.