- August offers pause in stretch of four out of five months of weakness for US Dollar over the past 5 years.

- Commodity currencies look to underperform – August has been weak for AUD, CAD, and NZD.

- Precious metals best two months of the year are July and August in QE era.

The beginning of the month warrants a review of the seasonal patterns that have influenced forex markets over the past several years. In our previous study, we decided to once again focus only on recent performance during the QE era of central bank policies (2009-present), and it revealed the market’s bias for a weaker US Dollar in July across the board.

While the seasonality forecast may have been on track through the first three weeks of July, the historical pattern was blown away after July 24. Not only did the US Dollar surge across the board in direct contradiction to the 5-year study, the commodity currencies, the purported leaders of the buck’s demise midyear, were the worst performers. In this sense, recent history could not have been a worse guide.

Despite the recent miss, we continue to focus on the 5-year horizon in consideration of the studies for April, May, and June versus the 20-year seasonal studies conducted for February and March. We still recognize and accept that the small sample size is not ideal, as well as the notion that there is increased statistical stability with using longer time periods.

However, because of the specific uniqueness of the past 5 years relative to any other time period in market history – the era of quantitative easing – we’ve elected to attempt to increase the stability of the estimates with the shorter time period.

In the QE era (which appears to be winding down now that the Federal Reserve has cut QE3 to $25B/month), August has proven to be a contra-trend month for the US Dollar. For your consideration, August offers pause during a stretch in which the US Dollar has lost ground in four of five months on a seasonal basis.

After the US Dollar’s broad outperformance in July (5-year seasonality called for the second weakest month of the year for the greenback), it is possible that a bullishly augmented technical picture boosts the profile of only a seasonally weak positive month. Viewed in this perspective, the commodity currencies (AUD, NZD, and CAD) look most vulnerable after their disappointing end to last month. 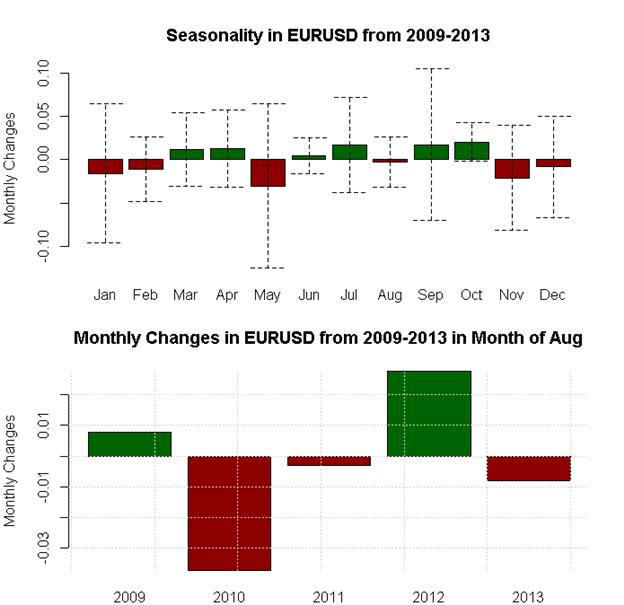 Seasonality tends to favor a barely weaker Euro in August. Historically, volatility has shrunk to about half of July’s range. The seasonal outlook is neutral EURUSD. 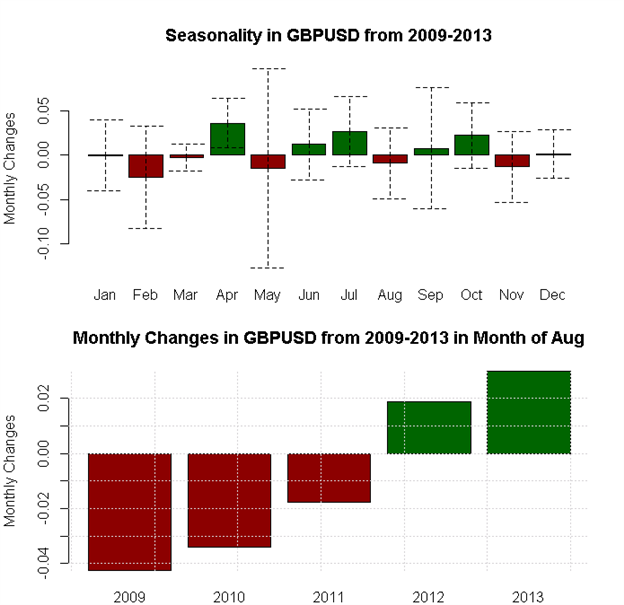 Seasonality tends to favor a barely weaker British Pound. GBPUSD has rallied in August each of the past two years, while the prior three years were each negative. The outlook is neutral, and we would expect volatility to pick up towards month end. 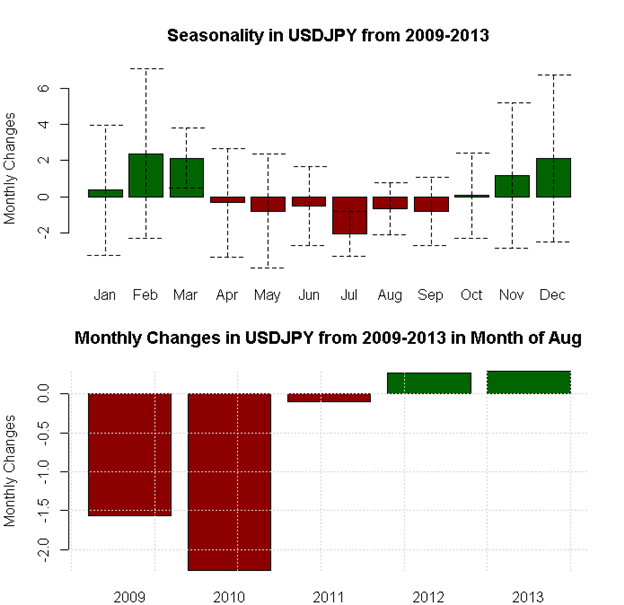 Seasonal outlook leans bullish for Japanese Yen (weaker USDJPY) although the data population is quite volatile. Outsized losses in 2009 and 2010 skew the 5-year average towards a stronger Yen than the 2011-2013 average would indicate. The August seasonality forecast is thus neutral, especially in context of USDJPY rallying in July – the supposed worst month of the year for USDJPY. 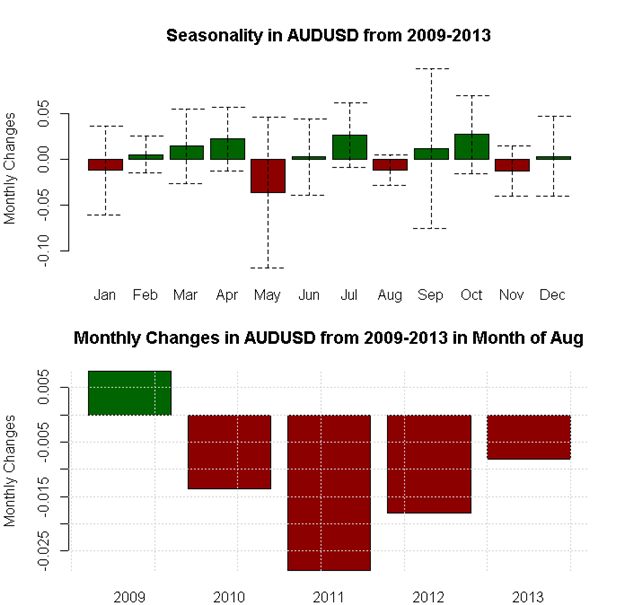 Seasonality favors a weaker Australian Dollar in August. AU DUSD has sold off each of the past four Augusts, despite volatility historically being at a low point for the year. Recent weakness seen in AUDUSD at the end of July (historically a strong month for AUDUSD) primes the market for more losses in August (first seasonally bearish month since May, last one until November). 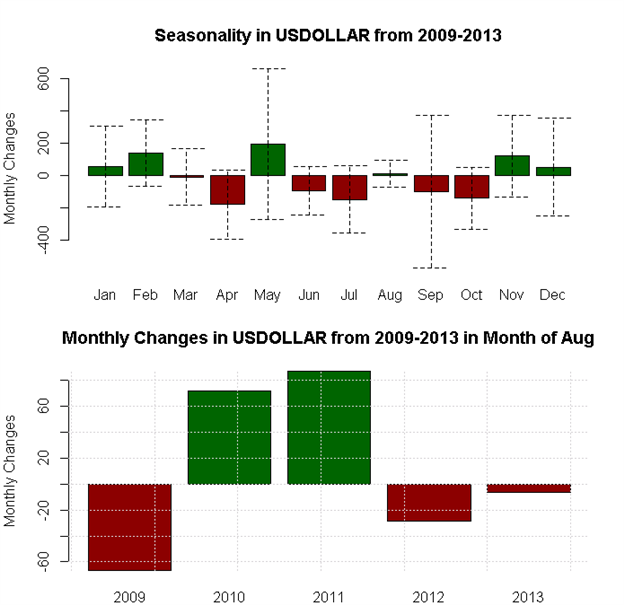 As an amalgamation of the Australian Dollar, British Pound, Euro, and Japanese Yen, the USDOLLAR Index serves as a proxy for the US Dollar more broadly. Historically, the US Dollar tends to hold flat in August (barely negative each of the past two years, outsized gains in 2010 and 2011, outsized loss in 2009). 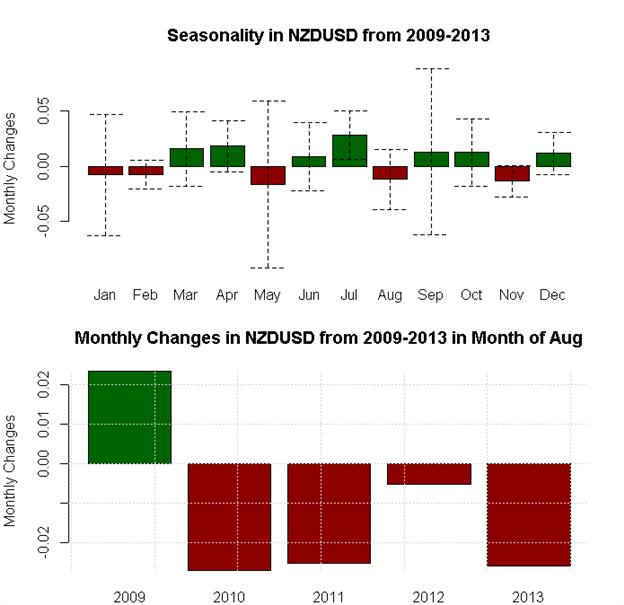 Seasonality favors a weaker New Zealand Dollar in August. NZDUSD has sold off each of the past four Augusts. Recent weakness seen in NZDUSD at the end of July (historically a strong month for NSUSD) primes the market for more losses in August (first seasonally bearish month since May, last one until November). 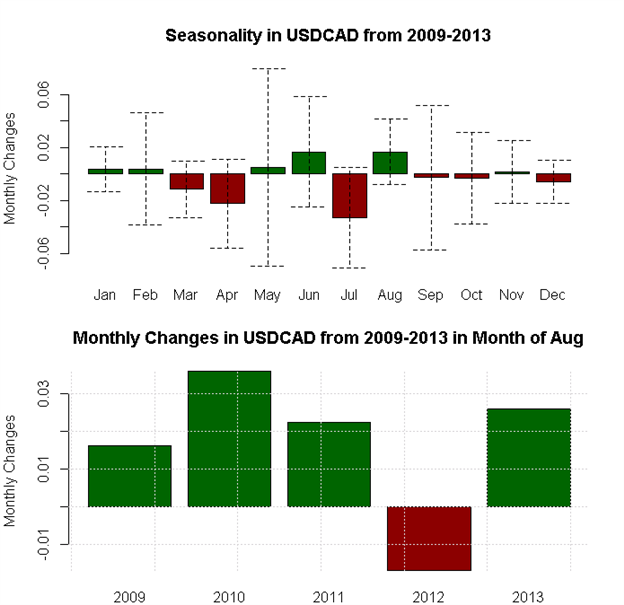 Seasonality tends to favor a weaker Canadian Dollar (stronger USDCAD) in August. Gains in USDCAD have been common in August, with four of the past five years producing gains. The seasonal outlook is bullish. 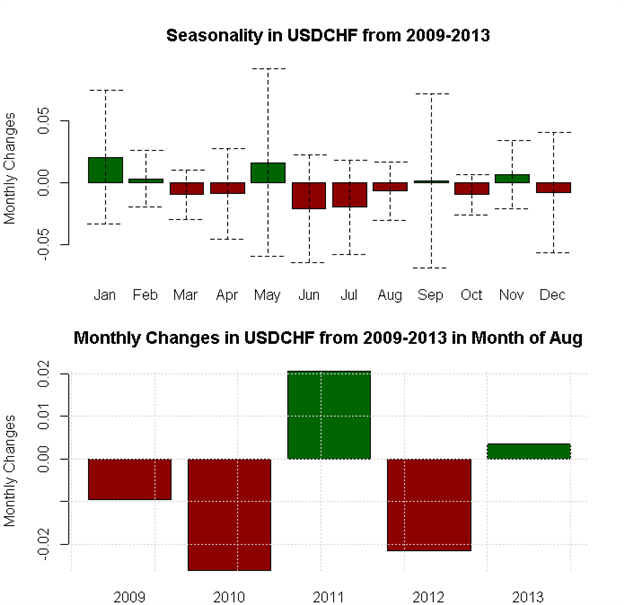 Seasonality favors a weaker USDCHF in August. Results have flipped between gains and losses each of the past four years, leaving the average decidely neutral. The seasonal outlook is bearish USDCHF, even as one of the lowest volatiltiy months of the year sets in. 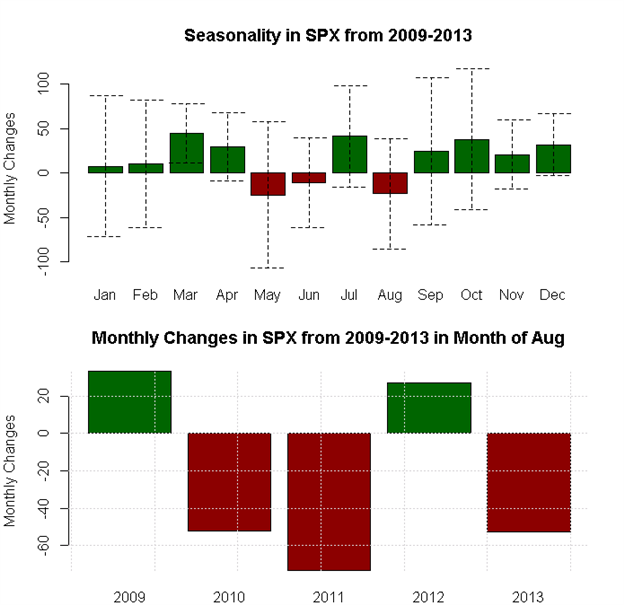 The S&P has shown a tendency to pull back in August and show increased volatiltiy. The seasonal outlook is bearish, as the market enters August having lost ground in four of the past five years. 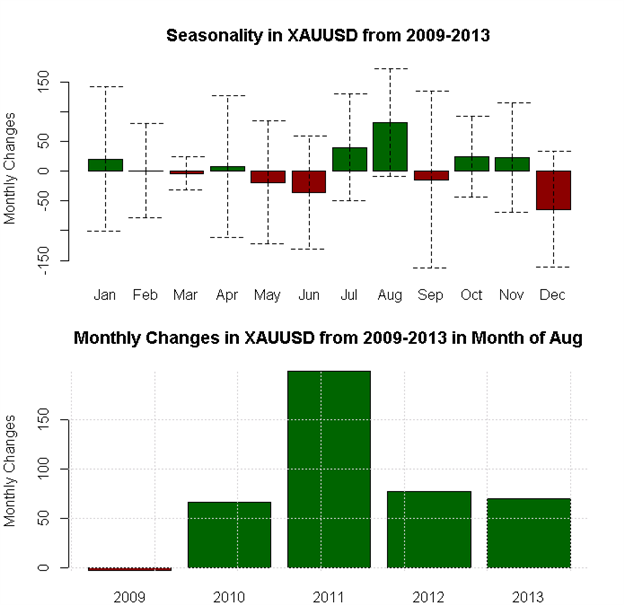 Gold has shown a stronger tendency to advance in August. Notably, the only loss occurred in 2009. Seasonal outlook is bullish as precious metals enter the second half of their best two-month stretch of the year.