- June begins stretch of four out of five months seeing weakness for US Dollar, the past 5 years.

The beginning of the month warrants a review of the seasonal patterns that have influenced forex markets over the past several years. In our previous study, we decided to once again focus only on recent performance during the QE era of central bank policies (2009-present), and it revealed the market’s bias for a stronger US Dollar in May across the board. The market was mostly cooperative in May, with the US Dollar posting its largest gains against the Euro (+1.67%) and the Swiss Franc (+1.65%), two of the historically weaker currencies during the period.

As a result of the improved accuracy of the 5-year seasonal study for April and May versus the 20-year seasonal studies conducted for February and March, we’ve once again decided to focus on the period since 2009. The small sample size is not ideal, and we recognize that there is increased statistical stability with using longer time periods. However, because of the specific uniqueness of the past 5 years relative to any other time period in market history – the era of quantitative easing – we’ve elected to attempt to increase the stability of the estimates with the shorter time period.

In the QE era (which appears to be winding down now that the Federal Reserve has cut QE3 to $45B/month), June has proven to be a far less enthusiastic month for the greenback. For your consideration, June begins a stretch in which the US Dollar has lost ground in four of the five next months (weakness seen from June through October, with August barely positive). But for against the Canadian Dollar, US Dollar weakness is consistent across the majors. 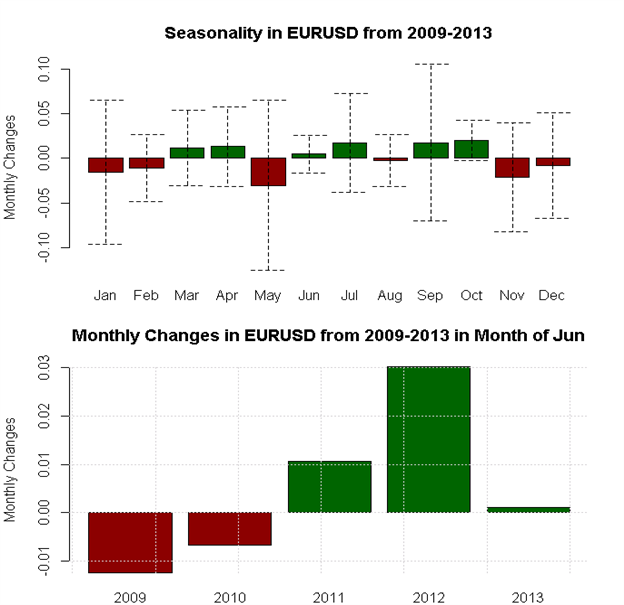 Seasonality has favored a stronger Euro in June. However, the seasonal outlook is neutral for EUR/USD as both gains and losses have been modest in the past five years. 2012 is a statistical outlier as the Euro posted an impressive gain against the US Dollar. 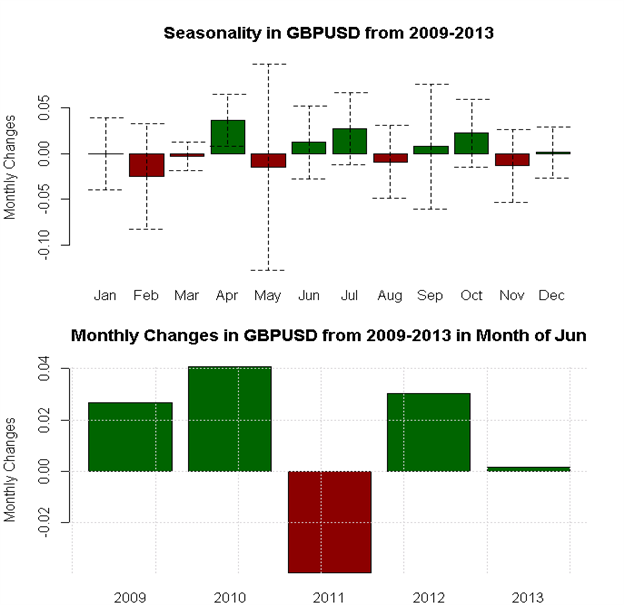 Seasonality tends to favor a stronger British Pound in June. In the past five years the British Pound posted a modest loss against the US Dollar, but the outlook remains bullish. 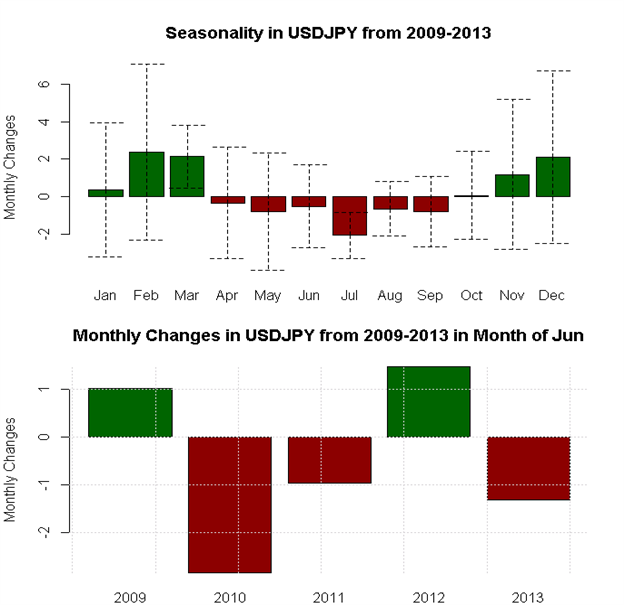 Seasonal outlook leans bullish for Japanese Yen (weaker USD/JPY). The Japanese yen weakened against the US Dollar in two of the five years, but the gains have been larger. June’s trading range is notably smaller than May’s. The seasonal outlook remains bearish USDJPY. 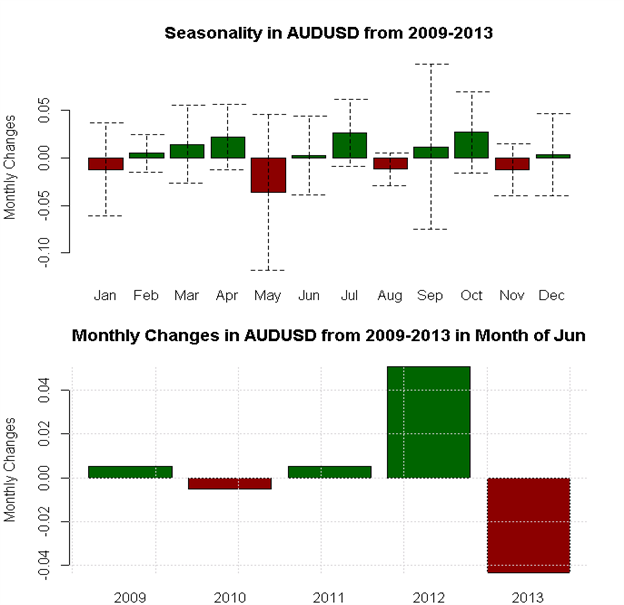 Seasonality is slightly bullish for the Australian Dollar in June as the single-currency posted gains three out of recent five years. Notably, in 2012 and 2013 the Aussie realized extreme price gains and losses, subtly hinting at the volatile nature of the single-currency. The seasonal outlook is neutral for the AUD/USD. 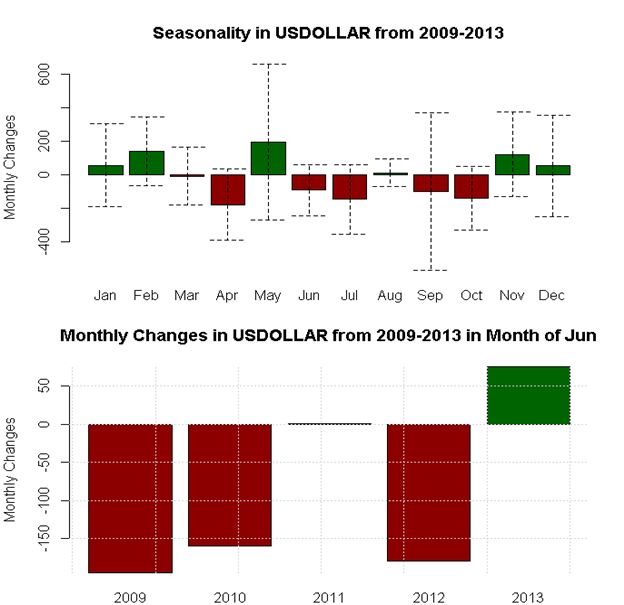 As an amalgamation of the Australian Dollar, British Pound, Euro, and Japanese Yen, the USDOLLAR Index serves as a proxy for the US Dollar more broadly. Historically, the US Dollar has largely realized sizable losses in the month of June. The seasonal outlook is bearish. 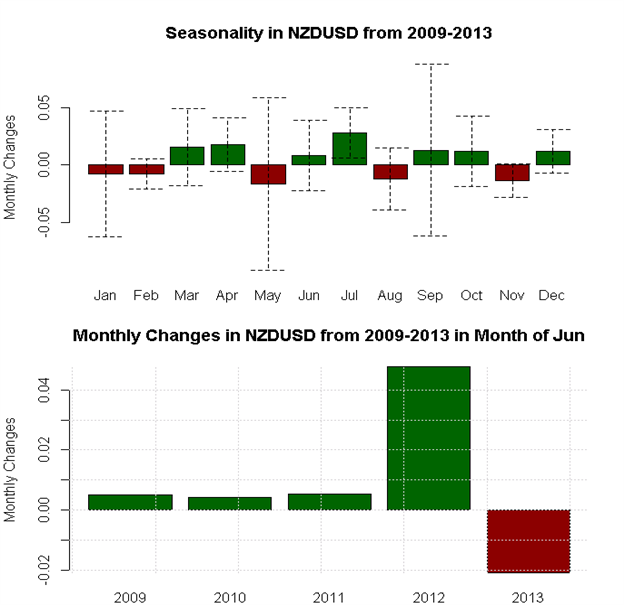 Seasonality favors a stronger New Zealand Dollar in June. The realized gain in 2012 is an outlier compared to the limited gains the single-currency has posted in the past. The New Zealand Dollar posted its first modest loss against the US Dollar last-year, but the seasonal outlook remains bullish. 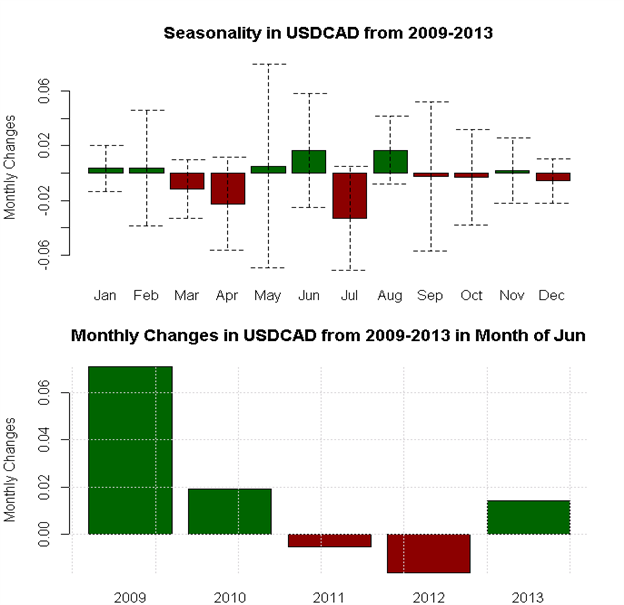 Seasonality tends to favor a weaker Canadian Dollar (stronger USDCAD) in June. The gains in have been deteriorating markedly since 2009, however the outlook remains Bullish. 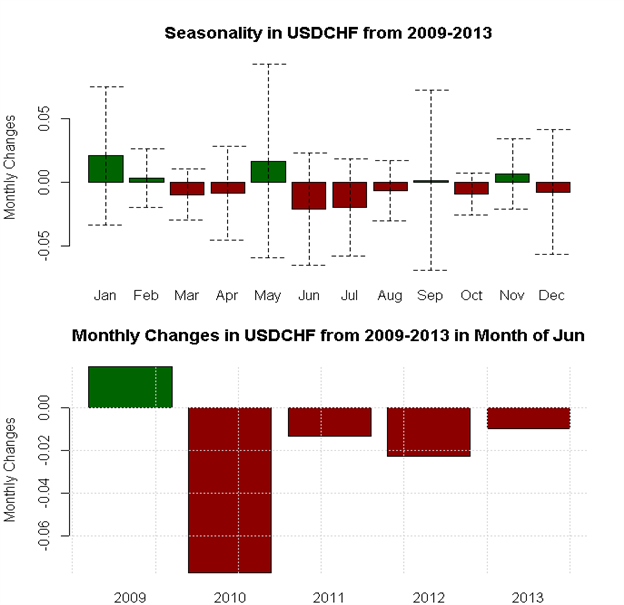 Seasonality favors a weaker USDCHF in June. Notably, the Swiss Franc has been strenghtened (weaker USDCHF) over the years. The seasonal outlook remains bearish USDCHF. 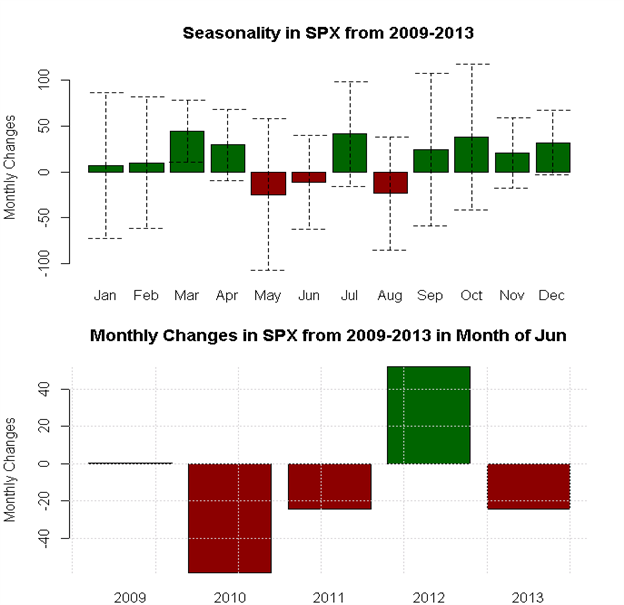 The S&P has experienced significant drawdowns in June compared to the gains. Notably, the trading range is smaller in June than May. The seasonal outlook is bearish. 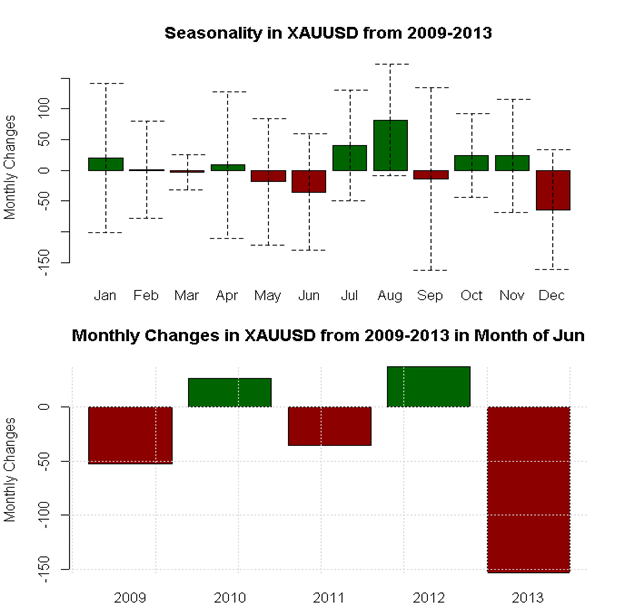 Gold has posted mixed returns in the month of June as there has yet to be consecutive months of gains or losses. 2013 is appears to be an anomaly as the price extreme has been far more than previous years. Seasonal outlook is neutral.