May Forex Seasonality Sees US Dollar Outperformance versus Aussie, Euro

- May has been the best month of the year for the US Dollar the past 5 years.

- Australian Dollar, Euro could be laggards.

- US Dollar has gained against every major on average in May since 2009.

The beginning of the month warrants a review of the seasonal patterns that have influenced forex markets over the past several years. Last month we decided to focus only on recent performance during the QE era of central bank policies (2009-present), and it revealed the market’s bias for a weaker US Dollar in April across the board. Indeed, this played out, as the US Dollar lost ground to six of the seven other majors (but for New Zealand Dollar), and the top performance on the month went to the British Pound as the seasonals forecast.

As a result of the improved accuracy of the 5-year seasonal study for April versus the 20-year seasonal studies conducted for February and March, we’ve once again decided to focus on the period since 2009. The small sample size is not ideal, and we recognize that there is increased statistical stability with using longer time periods. However, because of the specific uniqueness of the past 5 years relative to any other time period in market history – the era of quantitative easing – we’ve elected to attempt to increase the stability of the estimates with the shorter time period.

In the QE era (which may be winding down now that the Federal Reserve has cut QE3 to $45B/month), it’s evident that the US Dollar has been the clear winner for the month of May. From 2009-2013, April was the best month of the year for the US Dollar. If US Treasury yields continue to weaken and the 10-year breaks the 2.58% floor established since late-January, the expectation for USD outperformance in May should be tempered. 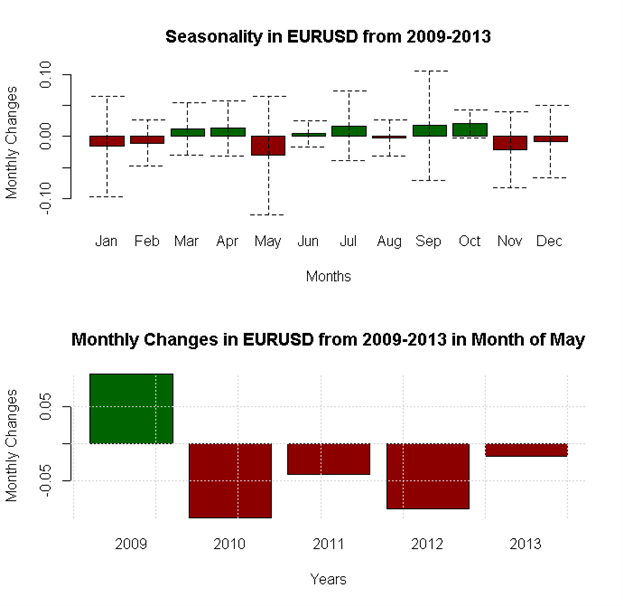 Seasonality tends to favor a weaker Euro in May. However, it appears that the losses have been decreasing since 2010. Yet, the seasonal outlook is bearish EURUSD. 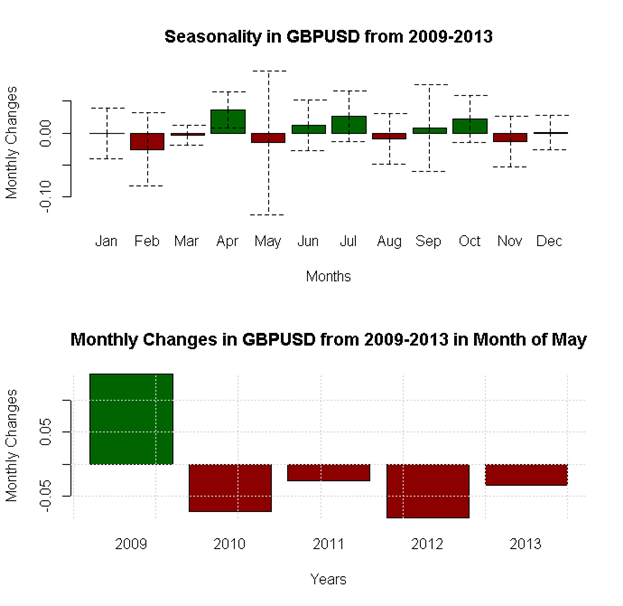 Seasonality tends to favor a weaker British Pound. Notably, the losses are minimal. However, the seasonal outlook remains bearish. 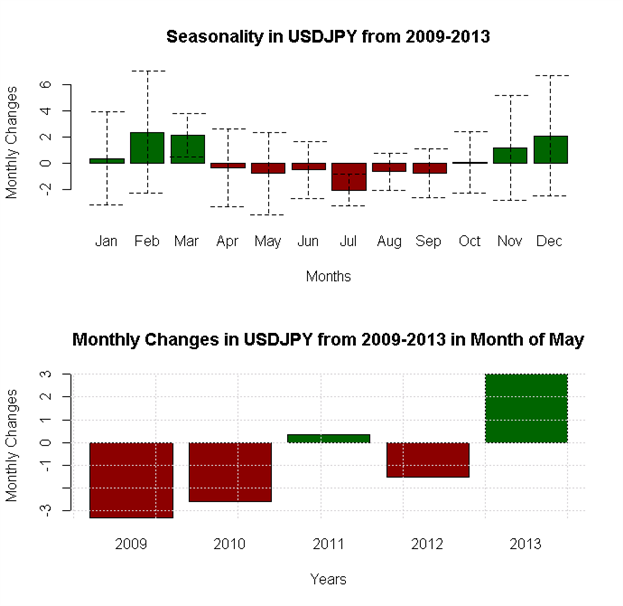 Seasonal outlook leans bullish for Japanese Yen. However, as a result of QQE introduced from the BOJ that resulted in a significant devaluation for the Yen in 2013 the seasonal outlook is neutral. 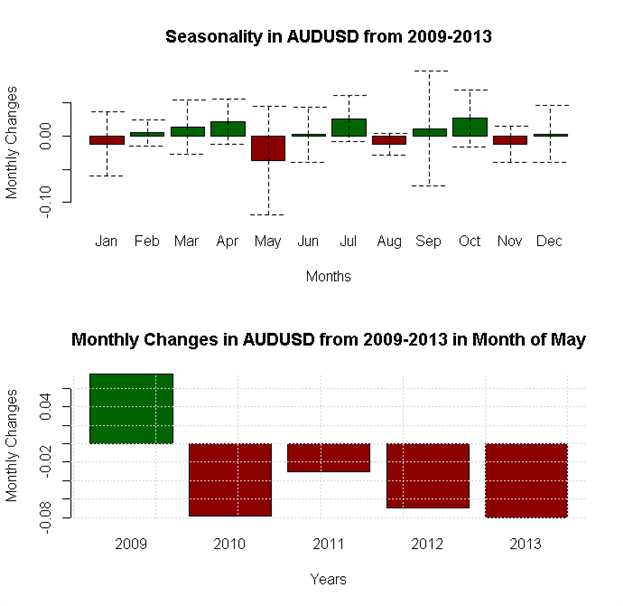 Seasonality favors a weaker Australian Dollar in April. The losses are broadly the same for each month aside from 2011. Nonetheless, AUDUSD tends to lose steady in May. The seasonal outlook remains bearish AUDUSD. 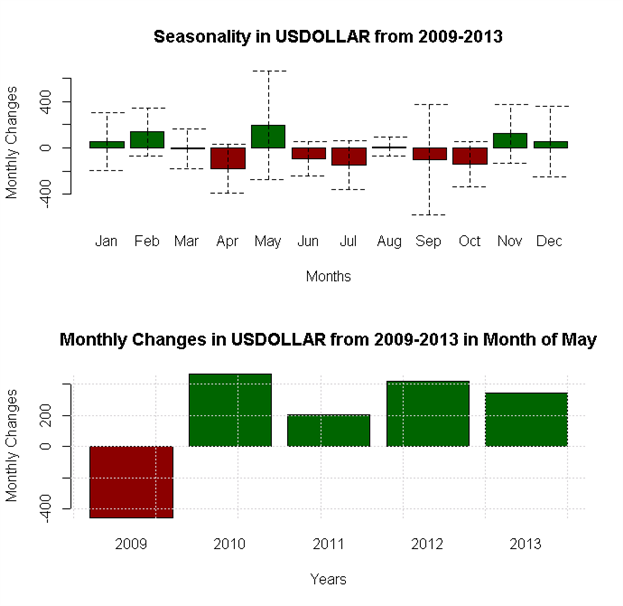 As an amalgamation of the Australian Dollar, British Pound, Euro, and Japanese Yen, the USDOLLAR Index serves as a proxy for the US Dollar more broadly. Historically, the US Dollar tends to realize sizable gains in the May. The seasonal outlook is bullish. 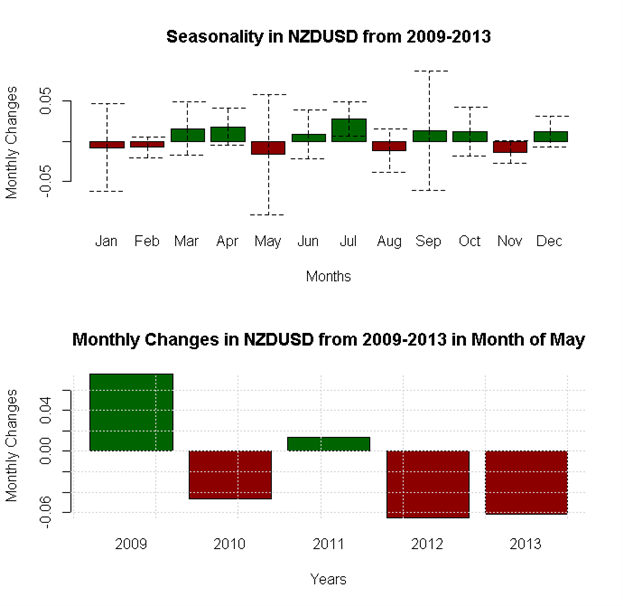 Seasonality favors a weaker New Zealand Dollar in May. Notably, NZDUSD incurred large losses in 2012 and 2013 of about the same magnitude. The notable gain is in 2011, though it is minor compared to the losses. Seasonal outlook is bearish. 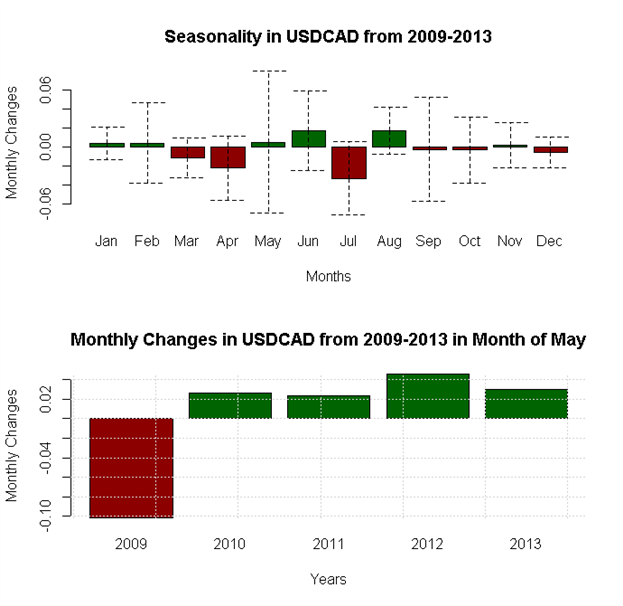 Seasonality tends to favor a weaker Canadian Dollar (stronger USDCAD) in May. The gain in USDCAD in May has been steady over the years. The seasonal outlook is a stronger USDCAD. 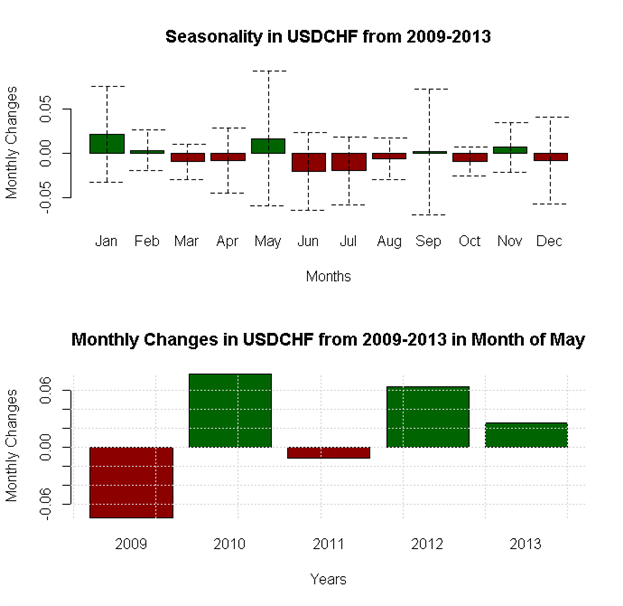 Seasonality favors a slightly bullish USDCHF in May. Notably, the Swiss Franc has been strenghtening (weaker USDCHF) over the years. Nontheles, because the USDCHF loss in 2011 was minimal compared to the gains, the seasonal outlook is bullish USDCHF. 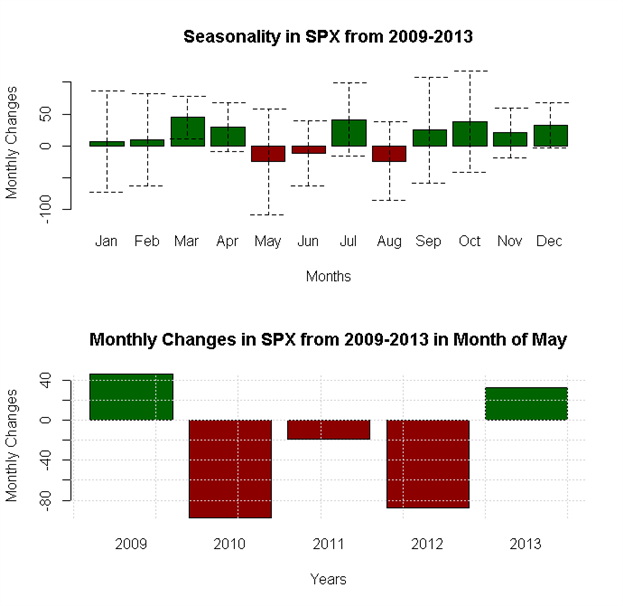 The S&P has experienced significant drawdowns in May compared to the gains. The seasonal outlook is neutral. 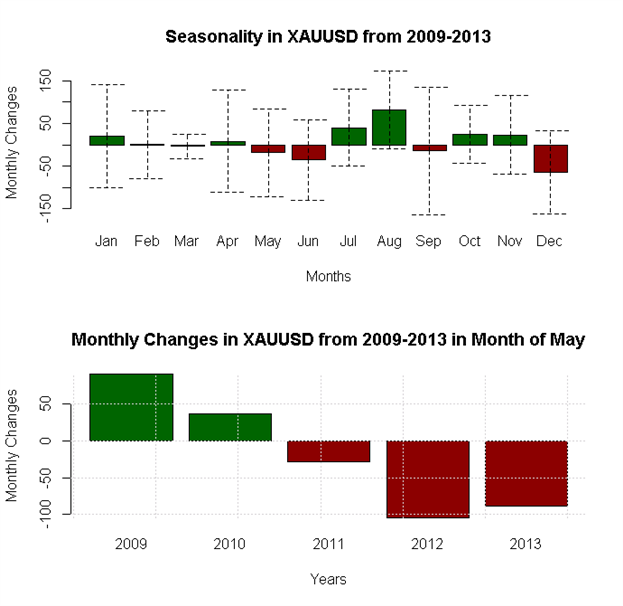 Gold has steadily shifted from a bullish month in May to a bearish month. Losses in 2012 and 2013 were of similar magnitudes. Seasonal outlook is bearish.