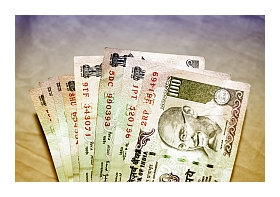 USD/INR: Indian Rupee, Gold at Risk on a Return of USDollar Strength

-Event risk this week, geopolitical tensions could be a turning point for the greenback.

-Indian equities have seen a pullback at these levels since 2012.

This week marks the end of April, beginning of May and has to be one of the most densely packed few days in terms of event risk for the year. These are the sort of weeks that can shift sentiment and lead new trends,especially after weeks of low volatility. The next few days will tell whether we see a final flush of weak USD longs or a rip from here in the greenback, but multiple factors favor a strong return during the month of May.

Putting the Indian Rupee in the context of emerging markets as a whole, INR is particularly exposed after being one of the best performing EM FX rates year-to-date. Prospects for a move higher in the USDINR rate look bright as optimism fades in the face election results, higher inflation in the second quarter on agriculture prices and a possible continuation of headwinds for emerging markets.

On a seasonal basis since 2009, the MSCI Emerging Market ETF has traded higher in April followed by a decline into yearly lows moving towards the middle of summer. Thus far in 2014 we’ve seen an incredibly strong correlation and unless we see a strong divergence in the coming weeks, this trend remains our friend. 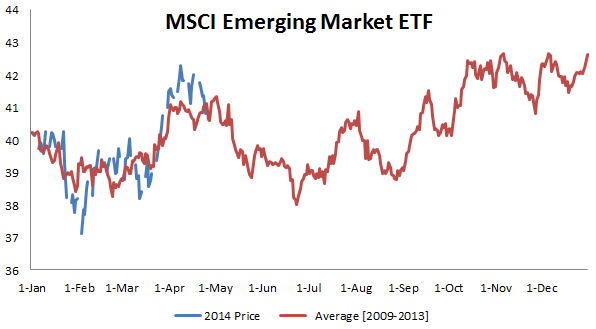 Of course looking at correlations YTD on a five year seasonality basis alone does not leave us with enough conviction to take action in EM FX pairs and the USDINR cross specifically. As only 6.66% of the MSCI EM ETF is constructed with Indian exposure, it’s important to note to what degree we see a negative correlation between Indian equities and the USDINR cross. Over the past year we have seen the correlation between -0.5 and -1.0. 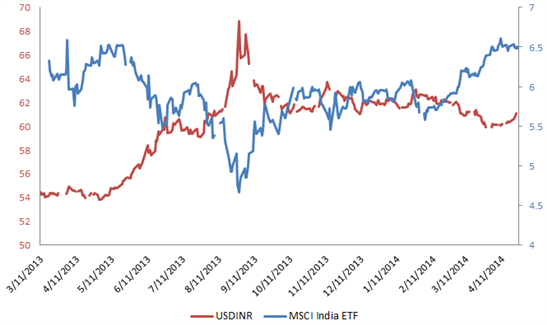 In regards to a May decline in the EM ETF in addition to negative correlations among Indian equities and the USDINR cross, current levels in the MSCI India ETF must be noted. Since mid-2012 we have found ourselves at these levels multiple times and have pulled back. If we do see a pullback and failure at the 2013 highs, this presents us with an additional USDINR bullish factor. 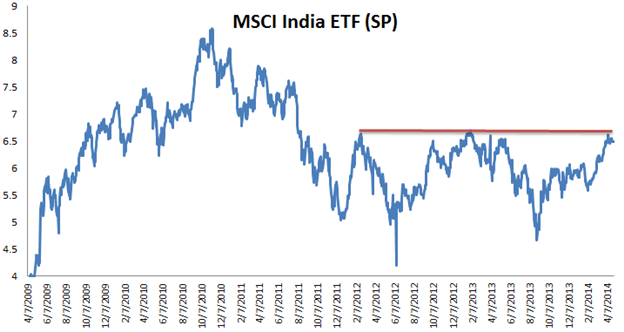 And when looking at the greenback on an individual basis, we see that the Dow Jones FXCM USDollar Index has tended to head higher in May. Although the fit is not perfect, the trend has followed in setting a YTD low into the end of April.

Seasonality Study: USD Higher in May 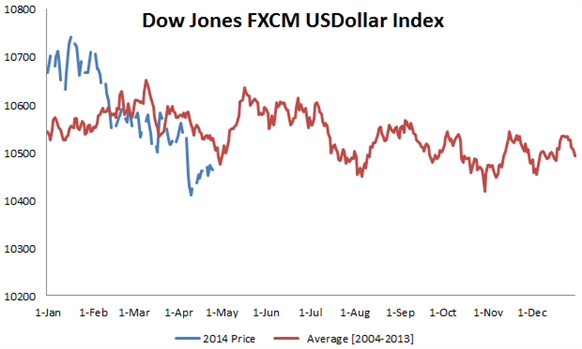 USDollar strength combined with further Fed confirmation of an end to QE3 by year end continues to put pressure on Gold prices, at least above its estimated producer breakeven price. In addition, developments in the commodity backed loan structures out of China and price action in the USD/CNH rate are also adding to downside pressure. Currency Strategist Michael Boutros notes that sub $1327 we may continue to see moves lower in the precious metal. With Gold import restrictions still in place in India and with the wedding season underway, it is likely that market prices in the country continue to trade with an increasingly higher premium despite moves lower in the spot price in London and New York. Put in the context of a stronger greenback in May, Gold is likely to remain capped over the next few weeks.