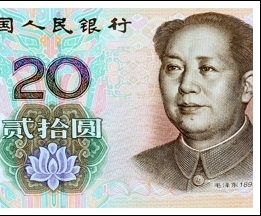 -Pair has been treated like a one sided bet, but a wider trading ban has caused short covering.

-Risks remain for Chinese credit markets on a breach of 6.25.

Market participants around the globe have treated, traded and positioned themselves as if USD/CNH was a one way bet: lower. Heavy control and a tight Yuan peg with the USDollar has kept the currency undervalued for some time now, but political pressure from the U.S. and reform in Beijing has led to a slow and steady appreciation of the Yuan. With such heavy central bank involvement in the rate, it is no wonder that volatility has remained low and direction clear.

Complacency in direction, low volatility and a ‘sure thing’ mentality has led to a dangerously overleveraged, one sided bet in regards to the FX rate not only with speculators, but also mainland businesses. In a country with heavy restrictions on traditional bank lending, many Chinese businesses have had to resort to the shadow banking system for funding. Commodity backed loans have become popular with copper being a main instrument of collateral for those loans. When the PBoC widened the Yuan trading ban in order to send a message to the shadow banking sector, a weakening of the FX rate and the overleveraged environment caused active selling at market of copper as debtors repaid outstanding debts being recalled. See the chart below and note the massive selloff in copper as Yuan long positions began unwinding. 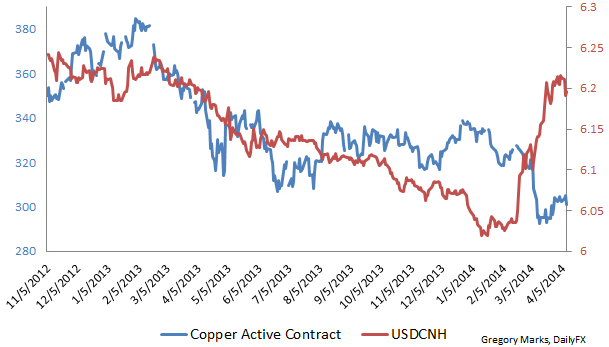 Looking forward as to fundamental catalysts for price action in the USD/CNH rate, we do know that there remains heavy short side USD/CNH exposure at the 6.25 level. Although we saw a relatively large wash of bears when the rate went from 6 to 6.2, a great deal of exposure remains. A breach of that figure could once again spark fears in Chinese credit markets overnight. Although the PBoC would surely not want to see any cascade of debts being recalled within the shadow banking sector at once above the 6.25 level, a weaker currency is favored especially in the context of growth that appears to be slowing. In addition, political pressure has once again mounted as Treasury officials have warned China against strategically weakening its currency for export led growth. Although we do not see large intraday movements in the pair, low volatility in the USD/CNH cross provides unique opportunities for market participants to express an opinion in the FX market on China in 2014.

“CNH is an offshore version of the RMB introduced by the Hong Kong Monetary Authority and People's Bank of China which allows investors outside of mainland China to gain exposure to the RMB.” Read more about the ability to trade USD/CNH with FXCM.

Read more about commodity backed loans and copper in China.