April Forex Seasonality Favors US Dollar Weakness - Against Whom?

- April has been the worst month of the year for the US Dollar the past 5 years.

- Don’t discount Canadian Dollar rebound – or gains in the S&P 500.

The beginning of the month warrants a review of the seasonal patterns that have influenced forex markets over the past several years. Last month’s review saw several currencies and instruments break from their 20 year seasonal patterns: the British Pound and the Euro fell rather than rallied; the Swiss Franc and the Canadian Dollar weren’t as quite as strong as history suggested.

As a result of several pairs continuing to diverge from the longer-term historical trend, for April we’ve decided to focus on a shorter-term time period: 2009-2013. The small sample size is not ideal, and we recognize that there is increased statistical stability with using longer time periods. However, because of the specific uniqueness of the past 5 years relative to any other time period in market history – the era of quantitative easing – we’ve elected to attempt to increase the stability of the estimates with the shorter time period.

In the QE era (which may be winding down now that the Federal Reserve has cut QE3 to $55B/month), it’s evident that the US Dollar has been the clear loser for the month of April. From 2009-2013, April was the worst month of the year for the US Dollar.

Unless US Treasury yields on the long-end (10Y and 30Y) begin to rise (they have fallen since the QE3 taper was announced in December 2013) or there is a materially negative shock to risk appetite stoking a run to relative safe havens, it could be another rough April for the US Dollar. 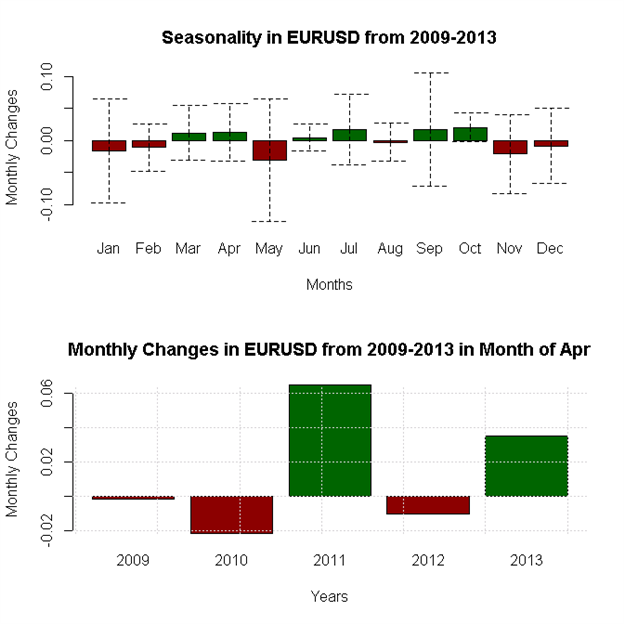 April is largely a bullish month for EURUSD and tends to exhibit the same pattern as March. The upside and downside changes are largely equal though EURUSD will end the month with larger gains. The seasonal outlook is bullish. 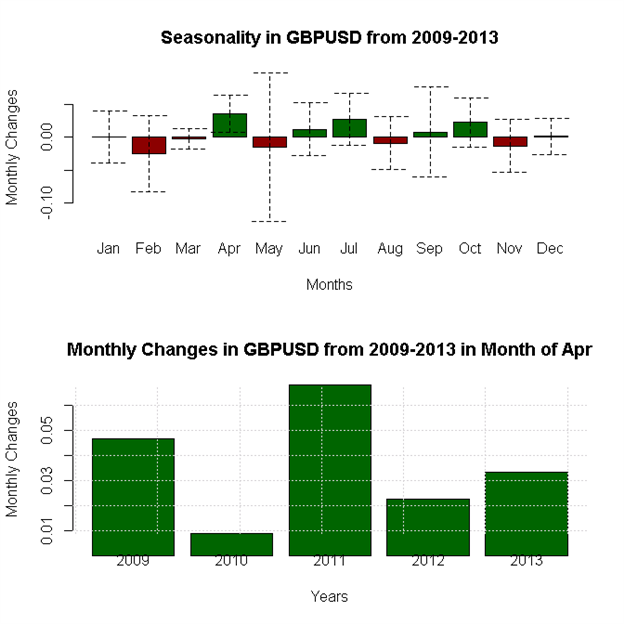 Data shows that the fourth month of the year is the first month that the British Pound realizes gains. GBPUSD has consecutively gained in the past four years. Statistics also shows that Sterling’s downside is significantly limited. The seasonal outlook is bullish. 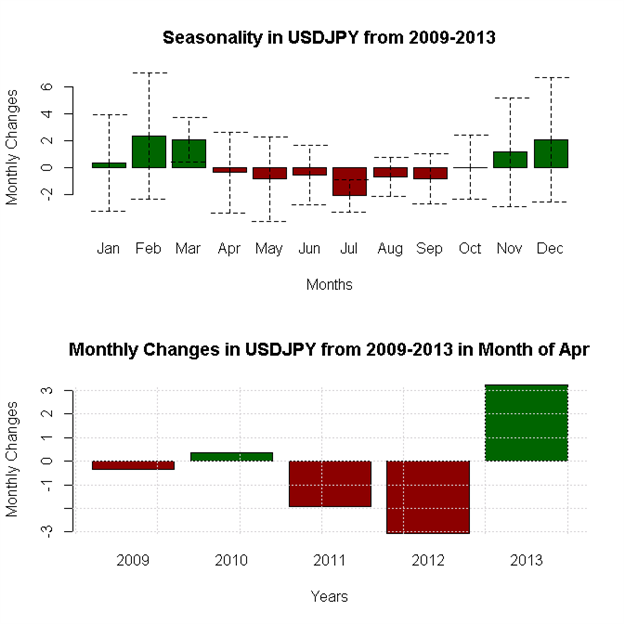 Data shows that April is the first month of the year the USDJPY tends to realize losses. In the past five years the monthly change in April has risen, though the tendency has been largely to the downside. The seasonal outlook is neutral. 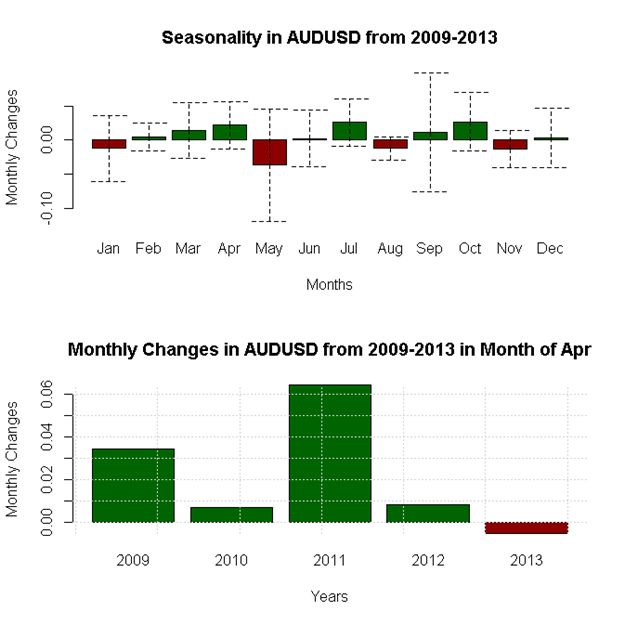 The Australian Dollar tends exhibits many of the characteristics in March. In the past five years AUDUSD has only realized one loss in April and it was minor compared previous gains. The seasonal outlook is bullish. 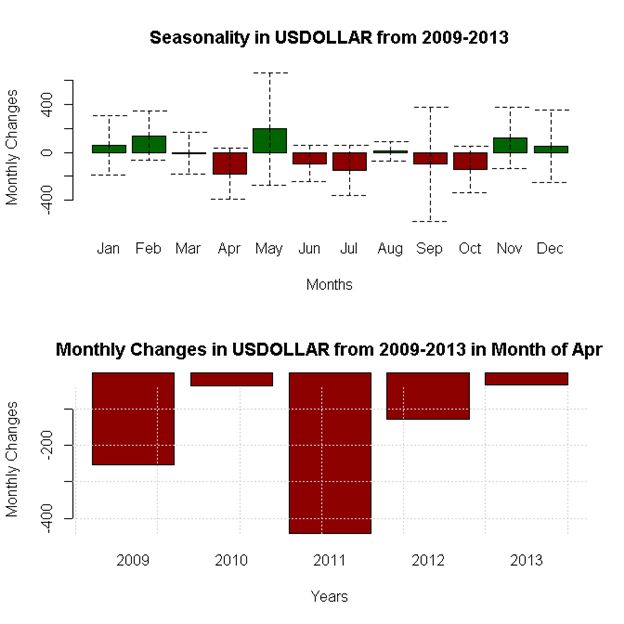 As an amalgamation of the Australian Dollar, British Pound, Euro, and Japanese Yen, the USDOLLAR Index serves as a proxy for the US Dollar more broadly. Historically, April is the first month of the year that the USDollar realizes large losses. The seasonal outlook is bearish. 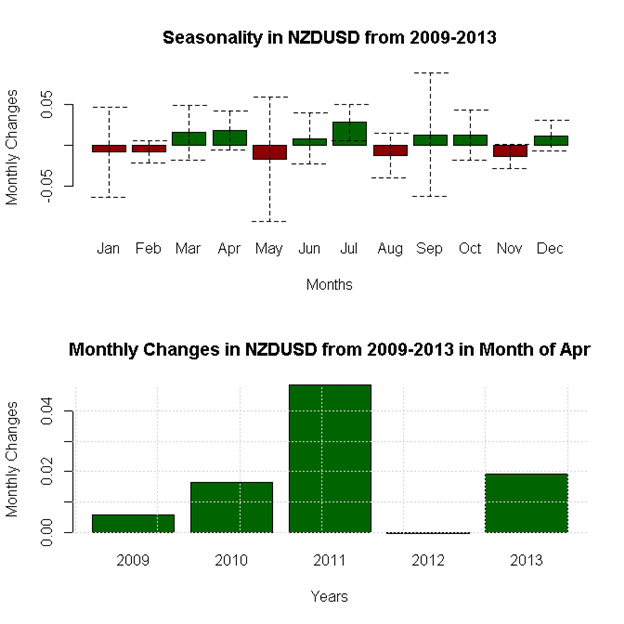 Seasonality favors a strong New Zealand Dollar in April. NZDUSD has not realized a single loss in April in the past five years. 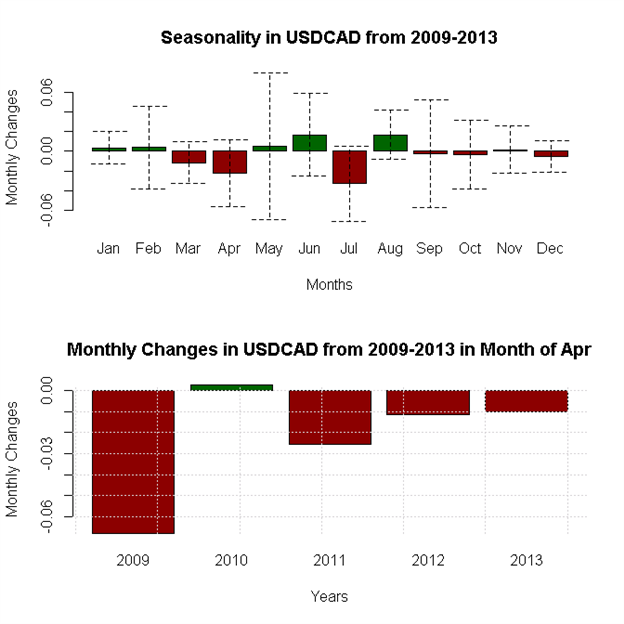 Seasonality tends to favor a stronger Canadian Dollar (weaker USDCAD) in April. Notably, the losses in April have been decreasing since 2009. Yet, the seasonal outlook is bearish USDCAD. 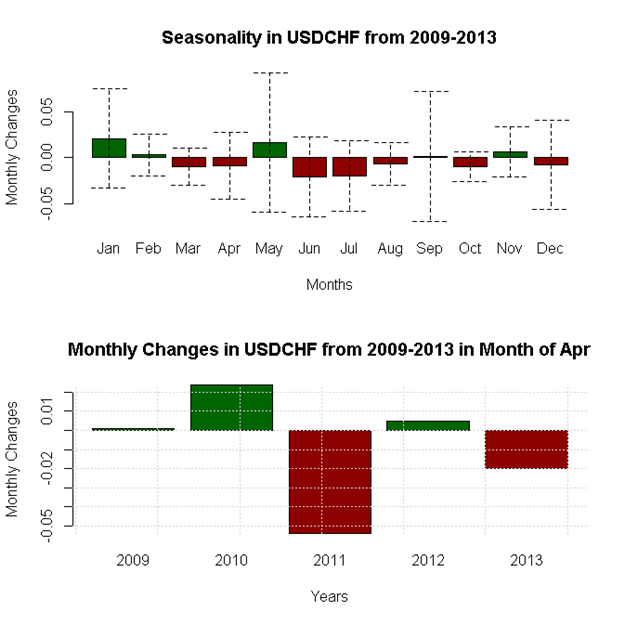 Seasonality favors a slightly weaker USDCHF in April. However, seasonal outlook is Neutral as April 2011 deviated significantly compared to the other years. 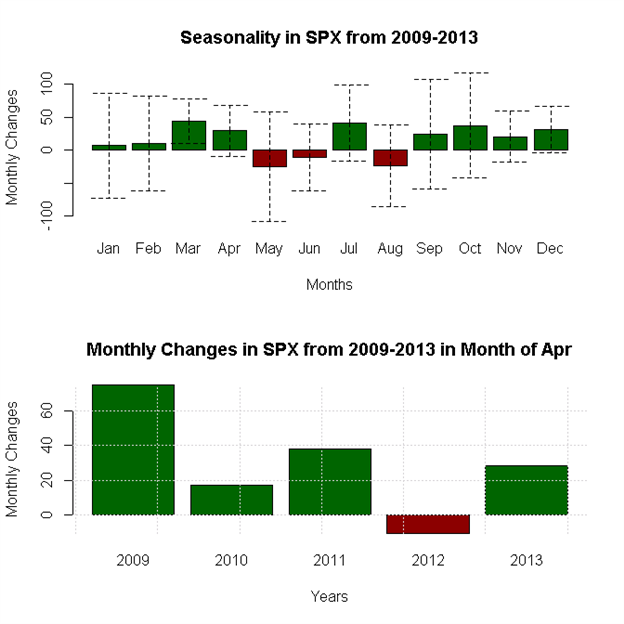 April continues to rally in S&P as seasonality favors a moderately bullish month. April 2012 was the first time S&P realized a loss and it was minor compared to the gains. Seasonal outlook is bullish. 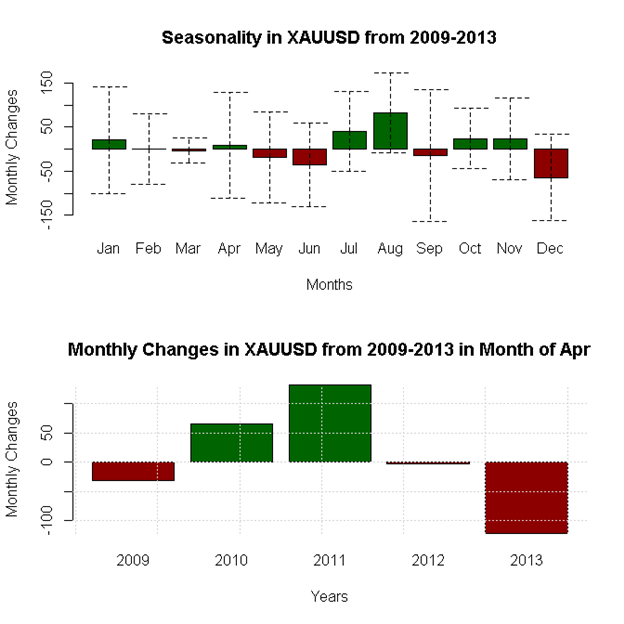 Gold is largely neutral for the month of April. Statics show that the average change has been mostly equal though the month tends to end on a bullish note. April 2013 posted a large loss mostly counteracting the recent bullish tendency. Nonetheless, seasonal outlook is neutral.