- March is the first positive month of the year for the Euro.

The beginning of the month warrants a review of the seasonal patterns that have influenced forex markets over the past several years. Last month’s review saw several currencies and instruments break from their seasonal patterns: the Euro was a top performer and the British Pound weathered its historical storm.

Seasonality, like any form of analysis, doesn’t guarantee a clear look into the future, but it is another useful way to monitor market conditions when establishing trades. Will the Japanese Yen fall in line with the end of the Japanese fiscal year? Will the Euro continue its resilient run? 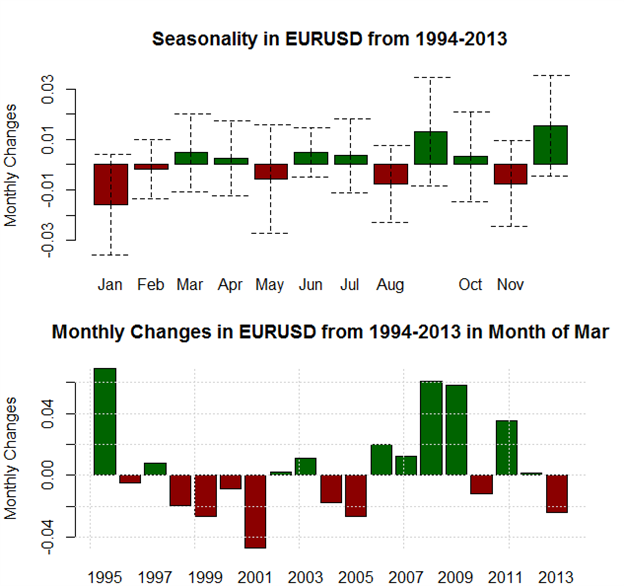 March is largely a neutral month for the EURUSD, but historical data shows that it is the first month in the fiscal year that the Euro realizes gains. Recent history shows the upside has been waning since 2008, and the last year was first year Euro had losses after two consecutive gains for the month of March. Euro’s losses last year for the month of March were sharp as it dropped below 200 pips for the first time since 2005. 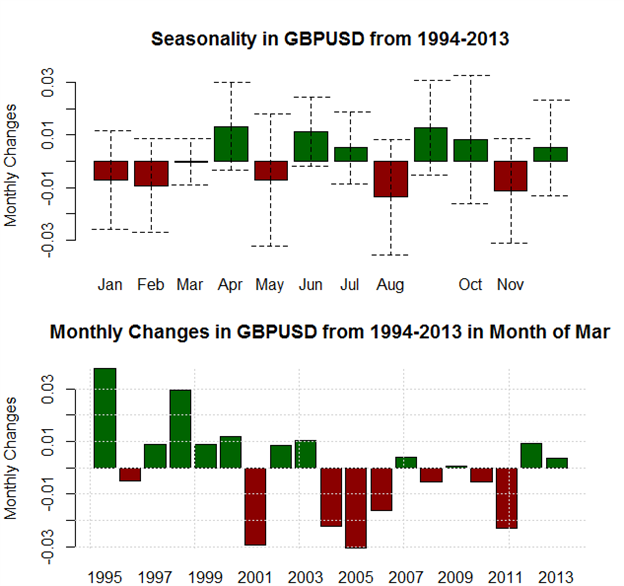 Data shows March tends to be the smallest monthly change for GBPUSD in the entire fiscal year. Recent trends show shat gains have largely been capped, and the British Pound is more open to larger losses. 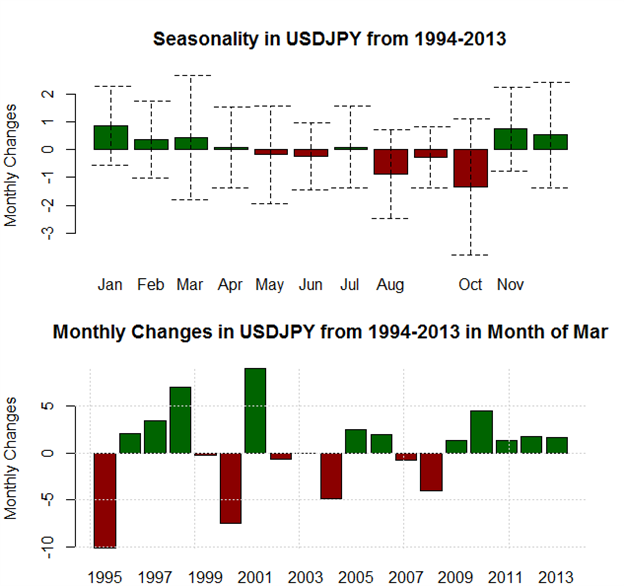 The early part of the year tends to be bearish for the Japanese Yen (bullish USDJPY), as gains have occurred in each of the first three months on average over the past 20 years. The USDJPY has realized gains for the past five Marches, but has underperformed its seasonal tendencies so far in 2014. 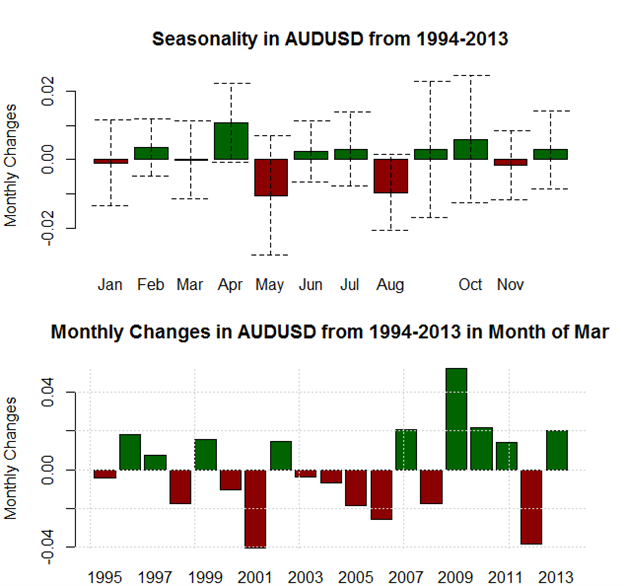 The third month of the year has produced limited gains for the Australian Dollar, but should see a larger monthly change than February. March seasonal patterns dictate a slightly bullish month for the Aussie. 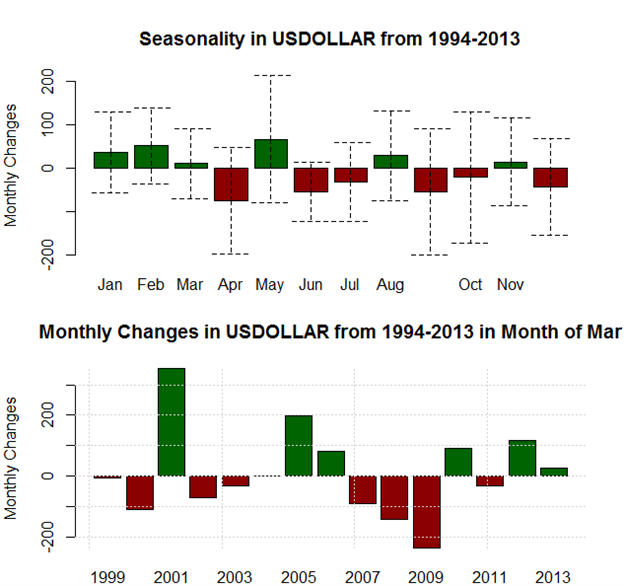 As an amalgamation of the Australian Dollar, British Pound, Euro, and Japanese Yen, the USDOLLAR Index serves as a proxy for the US Dollar more broadly. Historically, March is the weakest positive month of the year for the USDOLLAR. 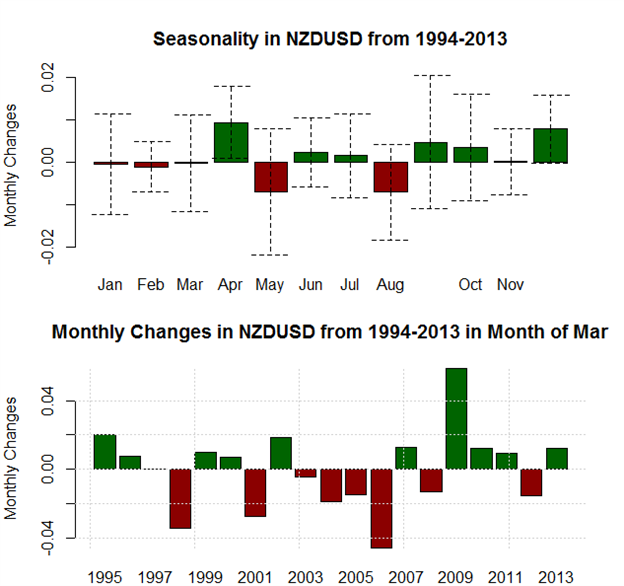 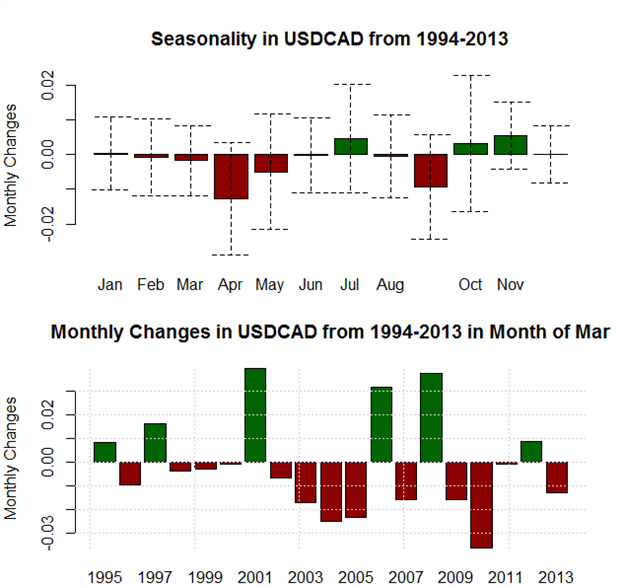 The USDCAD has modest consistency four of the past five years, most losing Marches. However, because the losses have only proven minor, there is only a small downward seasonal bias to USDCAD. March has a stronger negative bias than Janaury or February over the past 20 years. 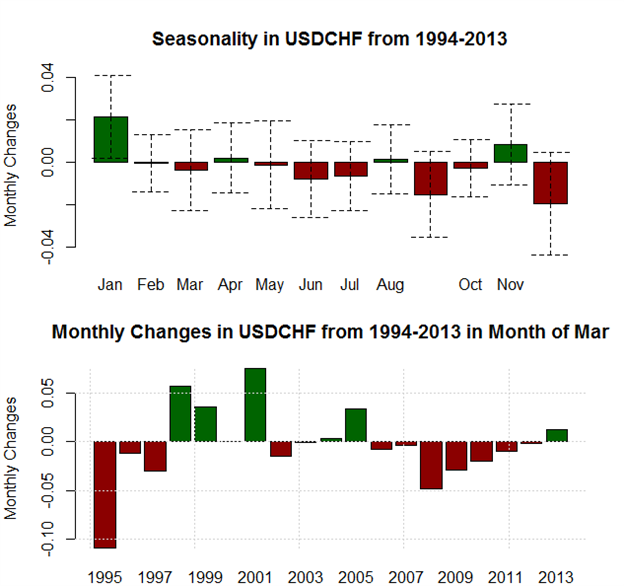 Seasonality favors a slightly weaker USDCHF in March. Slight losses are favored in line with the mostly bullish EURUSD forecast, and 2013 produced the first positive March since 2005. 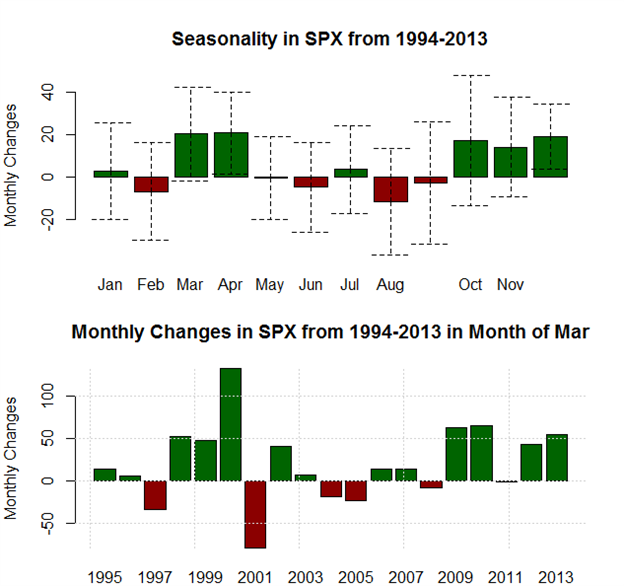 March has produced rallies in four of the five past years and six of the past eight overall, making March one of the best months of the year for the S&P500 over the past 20 years. We’re still in the best six month portion of the year for stocks, and with the S&P500 pressing highs, the bullish seasonal forecast holds. 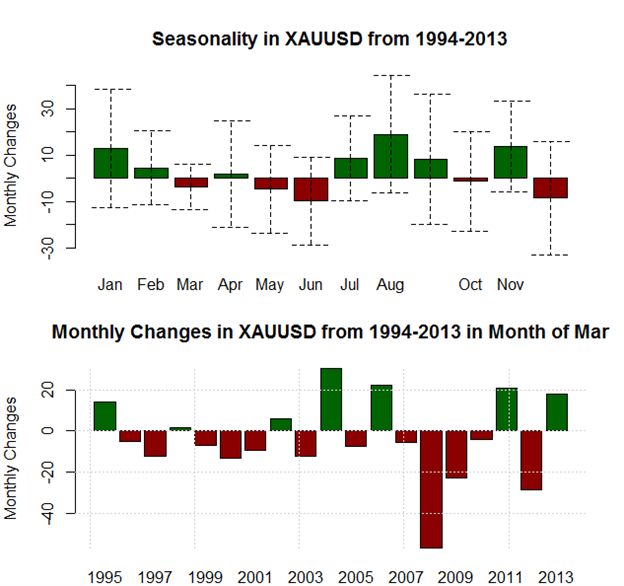 Gold has fallen in March in five of the past seven years, and March is the first losing month of the year for Gold historically. That being said, March also has produced the weakest negative month of the year. In light of continued US Dollar weakness and seasonality that dictates further weakness, Gold may have an opportunity to buck its seasonal trend.