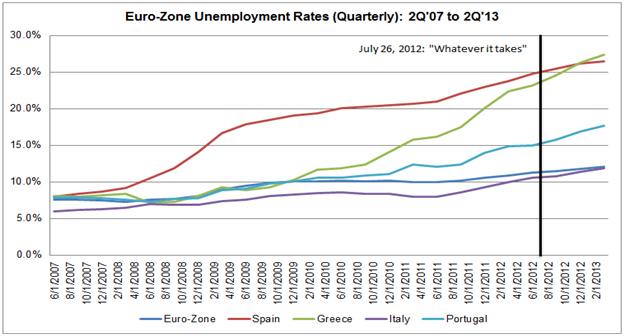 ECB's Draghi Promised "Whatever it Takes" - Here's Why it Hasn't Worked

THE TAKEAWAY: It's been one year since European Central Bank President Mario Draghi promised to do "whatever it takes" to save the Euro > European economies and financial markets remain stressed > Empty promises leave Euro at clear structural risks > EURUSD BEARISH

The pundits are out in full force today celebrating the one-year anniversary of ECB President Draghi’s promise that the ECB would do “whatever it takes” to save the Euro. The anniversary coincides with what Senior Technical Strategist Jamie Saettele calls an important near-term top as the EURUSD approaches levels not seen since the June 19 FOMC meeting.

Similarly, sky rocketing Italian and Spanish bond yields – the main reason for President Draghi’s proclamation – have come down sharply, putting a lid on concerns for dissolution of the Euro-Zone.

In reality, because the Euro-Zone’s problems have moved beyond financial markets and into the real economies, here is what President Draghi’s “whatever it takes” really achieved: record high Unemployment Rates.

When all is said and done, if President Draghi’s “whatever it takes” doesn’t address the underlying economic issues that are worsening the Euro-Zone’s labor market crisis, then there is little reason to believe that the Euro’s problems have gone away at all.