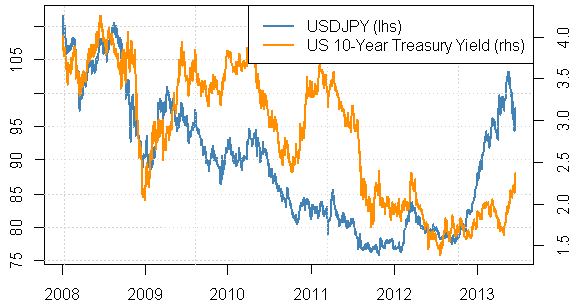 Aussie and Gold Plunge as US Yields Soar on FOMC; USD/JPY Hits ¥98.00

THE TAKEAWAY: The Federal Reserve keeps QE3 pace on hold at $85B/month while subsequently downgrading the US economy’s growth and inflation forecasts, but a more optimistic labor outlook has pushed US Treasury yields to multiyear highs, lifting the US Dollar, and hurting just about everything else.

Following the Fed’s policy meeting yesterday, US Treasury yields (inverse to price) rocketed towards their highest levels last seen in October 2011, before the Euro-zone sovereign debt crisis began to accelerate towards its apex (for now). For context, the 5-year US Treasury yield had its fifth largest jump ever yesterday following a Fed meeting. What provoked such volatility?

In particular, the Fed noted that “The Committee sees the downside risks to the outlook for the economy and the labor market as having diminished since the fall,” perhaps the clearest sign of an official nod to the improvement in the labor market.

As such, there is a massive repricing of assets across the globe ongoing as investors prepare for a marginally tighter Fed – which is thus far translating into a stronger US Dollar, riding yields higher once more. Initially, the US Dollar’s gains were prevalent against the Japanese Yen, as the USDJPY has been following the 10-year yield for the entirety of the post-GFC period, despite a recent divergence in the past three weeks. 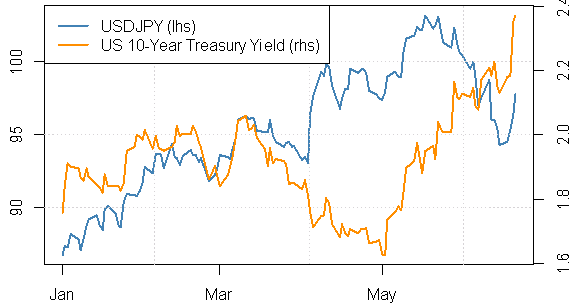 Needless to say, the US Dollar’s gains haven’t been limited to the Yen. The US Dollar was the top performer across the board this morning, and continues to hang on to its gains despite a mediocre Initial Jobless Claims report.

Elsewhere, there has been a notable outperformance by the buck against two of its biggest rivals the past few years – rivals being other currencies that took advantage of US Dollar weakness the past several years. Those currencies are the Australian Dollar and Gold. 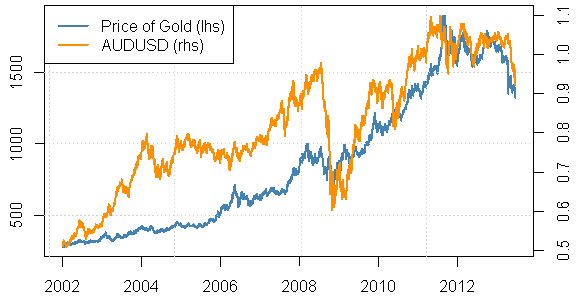 Since 2002, the Aussie and Gold have not only held a modest correlation (which strengthened considerably from 2009 through 2011), but they have also posted massive gains against the US Dollar. The AUDUSD’s exchange rate more than doubled from its low near $0.5000 in 2002 through its peak in 2011 at $1.1079, while Gold posted over a +600% gain over the same time horizon.

Mainly, these gains were predicated on the belief that the US Dollar’s purchasing power was being destroyed by the Fed’s loose monetary policy: the Aussie benefited from the yield differential against the US Dollar, attracting foreign investment thanks to the country’s mining sector and trade relationship to China; and Gold benefited as a hedge against fiat dilution, while also serving as a hedge against sovereign credit risk. 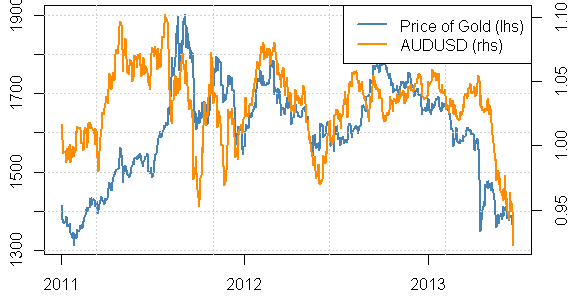 With US yields rising and the tides of turmoil pushed back by global policymakers in recent months, both the Aussie and Gold have suffered immensely versus the US Dollar. At the time of writing, the AUDUSD had fallen by -3.00% since the Fed’s policy statement was released yesterday, while Gold is down by -4.50%. Both have set fresh yearly and multiyear lows, at 0.9164 and $1285.81/oz, respectively.

For now, we expect these trends to continue to develop – that is, Australian Dollar and Gold weakness. This is of course predicated on the belief that the Fed finds incoming economic data sufficient to wind down QE3, which should help keep US Treasury yields supported going forward.