RBA Postmortem: What the 'Surprise' Cut Means for the AUD/USD

THE TAKEAWAY: AUD Reserve Bank of Australia Cuts Key Benchmark Interest Rate from 3.00% from 2.75%, Bucking Economists’ Expectations > Fundamentals and Technicals Align for a Breakdown in the Australian Dollar > AUDUSD Could Depreciate to 0.9850/900 by mid-June

On Tuesday, the Reserve Bank of Australia cut its benchmark interest rate by 25-bps, from 3.00% to a record low 2.75%. While swaps markets were pricing in a 52% chance of a cut, the 29 economists polled by Bloomberg News determined by a clear majority (21 to 8) that the RBA would keep its main rate on hold. This element of ‘surprise’ pushed the AUDUSD through multiweek lows and back to its weakest exchange rate since March 4 (the daily bullish reversal Hammer that day also marked the yearly low at 1.0114).

On one hand, the damage done to the AUDUSD was severe in the lead up to the rate cut: the Australian Dollar is the worst performing major versus the US Dollar this past week, losing -1.79% since the beginning of May. On the other, the ‘surprise’ rate cut only produced a sell-off culminating in the AUDUSD falling by 68-pips from open to close, down to 1.0183 from 1.0251. Compared to the European Central Bank Rate Decision’s impact on the EURUSD last Thursday, the pain inflicted on the AUDUSD by the RBA was considerably less severe.

With the dust settling, the question is now: where does the AUDUSD goes from here? It would be best to examine why forecasters’ consensus call for a hold (including myself – I expected a cut as early as June) was wrong, and why the reasons that provoked the RBA into cutting its benchmark rate to an all-time low are likely to linger, leading me to believe that the AUDUSD could remain weaker for the remainder of the 2Q’13.

There are three major reasons why the RBA cut its key interest rate. First, volatility in the Australian labor market is likely to continue as the mining sector peaks, which according to the RBA and government officials should be this year. Despite several rate cuts the past few years, from 4.75% in late-2011, Australia’s unemployment rate has increased from 4.9% in April 2011 to 5.6% in March 2013, the highest rate since November 2009. With the April labor market report due this week, it is possible the rate cut is front-running a weak reading, as I explained in this article.

Second, Chinese growth is slowing down and there are no indications from policymakers that they will try and stimulate their way out of the moderation. In fact, policymakers have said quite the opposite. In early-April, Chinese President Xi Jinping said that the days of "ultra-high speed" growth were in the past. Concurrently, Prime Minister Li Keqiang has indicated that China may have to accept annual growth rates below +7.0% in the coming years. With the 1Q’13 GDP report above this target at +7.5% annualized, it is unlikely that the government does much to prevent growth from trending downward. RBA policymakers were more sensitive to this sentiment more than previously believed by market observers.

Finally, and in what is becoming a more common occurrence, the RBA suggested that the high exchange rate of the Australian Dollar has become problematic. The RBA said that the Aussie “has been little changed at a historically high level over the past 18 months, which is unusual given the decline in export prices and interest rates.” With nearly every other major central bank engaging in some form of competitive devaluation, the RBA likely feels it needs to help push back the tides from the Australian economy and boost prospects for exporters. March Chinese Trade Balance on Wednesday might offer an insight into how trade flows are developing with Australia’s most important trading partner. 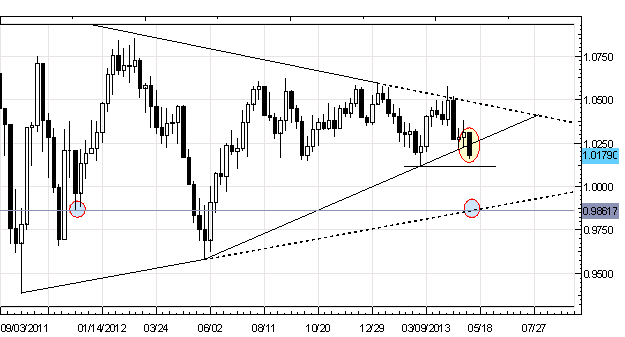 Where does the Australian Dollar go from here? The quick fundamental shift that has the RBA watching near-term economic data, possibly an indication of another rate cut in the 3Q’13, has also produced a potential technical break. The rate cut spurred a break of the 1.0200/20 level, and sellers have indeed been inspired to continue the push towards yearly lows just above 1.0100. The near-term bearish bias would be negated if price trade above 1.0385, the topside limit of the Bearish Evening Star candle cluster. Additionally, the uptrend off of the June 2012 and March 2013 lows broke today, suggesting a retest of 0.9850/900 (the mid-December 2011 swings lows and the ascending trendline off of the October 2011 and June 2012 lows) for the AUDUSD might be in the cards over the coming weeks.