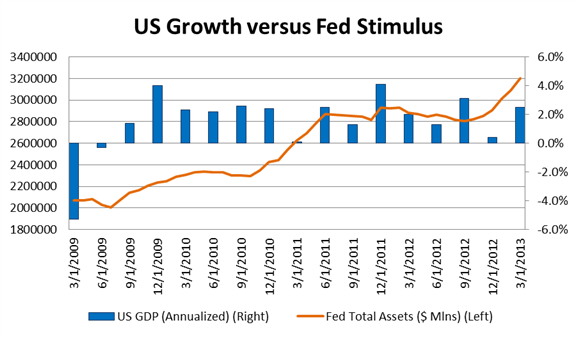 The US economy saw a solid improvement in the 1Q’13 relative to the 4Q’12, but growth still managed to disappoint what proved to be an overly-bullish forecast. According to a Bloomberg News survey, economists were expecting the world’s largest economy to grow at annualized pace of +3.0% in the 1Q’13; however, the US economy only grew by +2.5%.

Although the US consumer carried the recovery with the strongest quarter since the 4Q’10 – the most important cog in the US growth engine – there were still a number of factors that proved to be drags, ultimately leading to the missed print. On the surface, higher payroll taxes and the beginning of the budget sequestration are the obvious culprits. Defense spending plunged by another -11.5% annualized pace, after a dramatic -22.1% contraction in the 4Q’12. According to data compiled by Bloomberg, this was the biggest back-to-back quarterly drop in defense spending since 1954, when the US military wound down the Korean War.

Whether or not the US economy can maintain its momentum truly lays with the health of the US consumer. The savings rate dropped to 2.6% in the 1Q’13, the lowest rate since the 4Q’07 – right as the global financial crisis began. This is a substantial decline from the 4.7% savings rate in the 4Q’12. In a similar vein, real disposable personal income dropped by -5.3% in the beginning of the year, after surging by +6.2% at the end of 2012. Conclusively, if these trends persist, US consumers will become weaker in mid-2013, adding another obstacle to recovery.

The big question is whether or not the missed initial 1Q’13 GDP print could spur a shift in the Federal Reserve’s recently neutral tone, in so far as Fed policymakers could suggest once more that the current QE3 program will remain in place for the duration of the year. At this point in time, and given the reaction by the US Dollar, the answer remains no; that is, the Fed is unlikely to view that 1Q’13 GDP print as a material miss, and instead, will continue to monitor inflation and the labor market as the cues for withdrawing stimulus. With that said, one of the Fed’s gauges of price pressures – Core PCE – was at +1.2% in the 1Q’13, well-below the Fed’s +2.0% y/y target rate for inflation.

Following the release, the Dow Jones FXCM Dollar Index (Ticker: USDOLLAR), an equal-weighted basket of the Australian Dollar, the British Pound, the Euro, and the Japanese Yen against the US Dollar, continued its intraday declines, falling from 10509 to as low as 10495. However, at the time this report was written (approximately 30-minutes after the US 1Q’13 GDP report), the USDOLLAR had rebounded to 10505. A look at longer-term charts shows that the USDOLLAR is finding support ahead of channel support off of the April 2 and April 16 lows, at 10475.