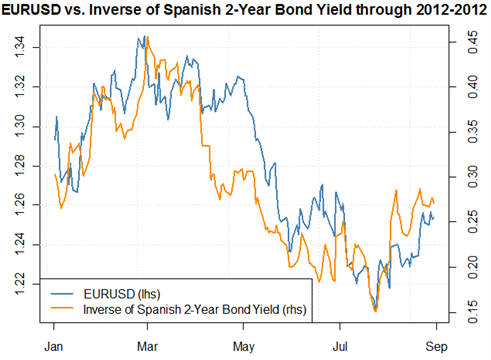 Will the Euro Survive? What to Watch for in September and Beyond

The Euro’s exchange rate versus the US Dollar continues to languish given the real danger it will cease to exist as we know it, and the potential fallout for broader financial markets of a Euro breakdown could be significant. Viewed as such, the EURUSD offers important insight into recent developments in the Euro-zone and represents an important bellwether for not only European equity and bond markets, but broader global assets.

After falling to fresh multi-year lows through the first half of the year, however, the EURUSD remains surprisingly resilient. A recovery in Italian and Spanish bond prices showed investor confidence improved as European Central Bank President Mario Draghi pledged to do “whatever it takes” to keep the Euro-zone together. The decreased funding costs for these countries comes against a worrisome backdrop of Spain on the verge of a sovereign bailout after receiving aid north of €100 billion for its banks in mid-June. As the Euro-zone’s fourth-largest economy, Spain’s funding needs would be substantial.

Add the increased possibility that Greece could be pushed out of the Euro-zone within the coming weeks, and it is easy to understand the wild ranges in the Euro/US Dollar over the past few weeks, trading as low as 1.2041 in July before rebounding to near 1.2600 this past week. Needless to say, the past few months have been quite the rollercoaster.

We have detailed the two most important story lines to follow to understand the ebbs and flows of the crisis and the future of the Euro, at least through the rest of 2012. It is little exaggeration to claim that the outcomes of these events could decide the performance of financial markets over the rest of 2012 and beyond.

- Does the European Central Bank bailout Italy and Spain via a major bond-buying program? No.

As the Euro-zone’s third and fourth-largest members, Italy and Spain likely hold the key to the Euro’s survival. When ECB President Mario Draghi said that he would do “whatever it takes” to preserve the Euro, many believed that this meant the central bank would institute a ceiling on Italian and Spanish government bond yields—in effect bailing out two of the Euro’s largest debtors. Investors in turn became less squeamish about holding Euro-denominated assets and broader speculative investments. Since Draghi’s announcement on August 2, the EURUSD has strengthened by 3.2% and the US S&P 500 is up 4.5%.

These rallies have been predicated on the notion that the ECB would be unveiling a major unlimited bond-buying program; but recent commentary has suggested that any bond-buying program would only be limited in nature, and only target short-term securities. We thus believe that any measures that fall short of an unlimited program will disappoint market participants, and we would expect the EURUSD and the S&P 500 to trade lower after such an announcement. 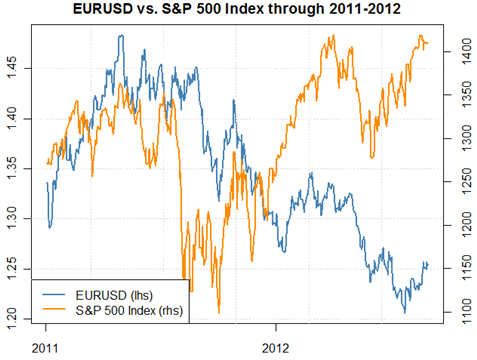 At present time, neither Italy nor Spain is in line to receive a bailout. But if Italian and Spanish bond yields linger above key levels for too long (greater than 5% for 2-year notes and greater than 7% for 10-year notes), bailouts will be inevitable.

We saw yields at similar highs through May, and clear market turbulence on the month emphasizes that a return to those conditions would be dangerous to the S&P 500 and broader assets. Markets eventually recovered as the ECB pledged fresh liquidity injections and investors quickly re-entered stock markets.

We thus believe that the EURUSD and the S&P 500 are vulnerable as Italian and Spanish bond yields trade above the aforementioned key levels. Yet history has shown that markets could gain once the bailout programs are announced and firmly in place.

- Does Greece exit the Euro-zone? Yes. Is this a Euro and financial market negative? Not necessarily.

Greece has been kicking the can down the road for the past year, dodging defaults and calls to leave the Euro-zone whilst barely surviving. In May and June, the Greek electorate nearly voted in a far-left leaning government whose leaders vowed to renege on previous bailout agreements. Their rise to power would have signaled the end of Greece’s inclusion in the Euro-zone, and the razor-thin margin of defeat only underscores how unpopular austerity and bailouts have become in Greece.

Now the New Democracy coalition government needs to get through another €11.5 billion in spending cuts for 2013 to 2014. The timing of this decision is very important: the European Troika (the European Central Bank, the European Commission, and the International Monetary Fund) has declined to extend further aid to Greece unless these cuts go through. With the country facing a cash drought in the near-future, it is difficult to say that Greece will make it through the next few weeks unscathed.

But where Greece falls short and might be forced out of the Euro-zone, the Euro might actually stand to gain. There are two perspectives if Greece leaves. First, as things stand currently – there is no major safety net in place as the European Stability Mechanism (ESM) is not yet in force and there is no major ECB bond program in place. A Greek exit from the Euro-zone could force the Euro/US Dollar and S&P 500 to fall back quickly and sharply.

But if the safety measures are indeed in place when Greece leaves the Euro-zone – the ESM is active and the ECB has a plan in place to keep yields in Italy and Spain capped, even temporarily – a Greek exit might produce Euro gains. A big part of the Euro’s fundamental weakness, economics aside, is a lack of confidence: the uncertain outcome of the crisis has scared away market participants. Should Greece leave, this uncertainty is thus removed from the landscape. In this event, we would expect the EURUSD to recover -and the S&P 500 to rally, both modestly.

Key Event: German Constitutional Court rules on legality of the ESM on September 12. 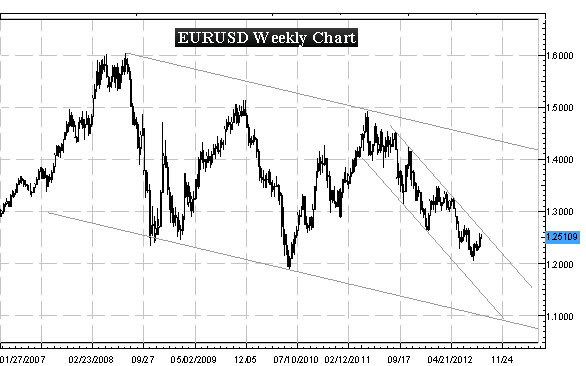 Even in the event that Euro-zone leadership is able to avoid the worst case scenarios for the above situations, the Euro’s value has been eroding over the past several years. Since peaking near 1.6000 in mid-2008, the EURUSD has traded in a 2500-pip range to the downside, with more recent price action coming in near the middle portion of the range. Even if the relatively shorter-term channel the EURUSD is currently in breaks to the upside, we believe that a retest of the highs seen last year near 1.5000 are out of the question given the current encompassing technical structure the pair has traded in over the past four-plus years.

In the best case scenario, in which the ECB embarks on a debt monetization path by purchasing Italian and Spanish debt indefinitely, this would still plague the Euro as it would artificially dilute the common currency’s value; and in this case, the EURUSD could very-well trade towards 1.1000 near the start of 2013.

A clear link between Euro Zone crises and broader financial markets implies that similar risks exist for the highly-correlated S&P 500; expect stocks to track moves in the EURUSD of critical event risk.