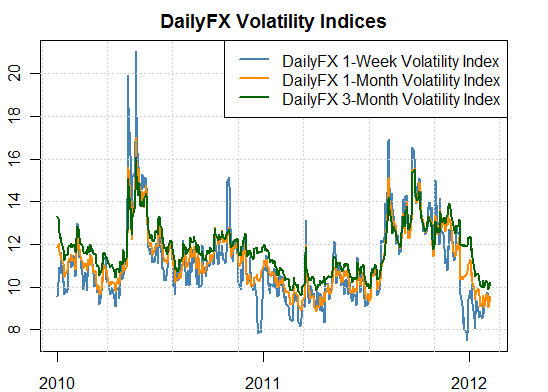 Forex Trading Volume Rises in North America: What it Means for You

The Federal Reserve’s Foreign Exchange Committee released its semi-annual survey on the average daily trading volume in the forex market, showing interesting shifts in overall trading. According to central bank surveys, North American FX trading activity rose 28 percent from April to an all-time high of $977 billion a day in October.

Increases in volume were limited to North America, however. In October, currency trading dropped by 3 percent to $1.97 trillion per day in the United Kingdom, according to data released by the Bank of England. Elsewhere, trading activity dropped as well, with average daily volume contracting by 23 percent in Australia. The statistics show that turnover in the EUR/USD represented 37 percent of global trading activity, while the USD/JPY accounted for 10 percent of all activity.

Why does all of this matter to the retail forex trader?

Bloomberg News highlights that volatility in forex markets — as seen through the JPMorgan G7 Volatility Index — has fallen substantially through the same stretch. At the time this report was written, the JPMorgan G7 Volatility Index had dropped as low as 10.07 percent in February, a sign that tensions in the currency markets have calmed. The DailyFX Volatility Indices, which measure FX options’ market volatility expectations, are just barely above their lowest levels since the onset of the financial crisis in 2008.

As Quantitative Strategist David Rodriguez notes, the “especially low” volatility points to further losses in safe haven currencies and gains in more speculative counterparts. Such dynamics suggest that the US Dollar is particularly vulnerable; with near-zero percent short-term interest rates, few speculators wish to hold U.S. Dollars in their portfolios. Instead they seek the much higher and most often riskier returns available in currencies such as the Australian Dollar and even the Euro. The U.S. Dollar will likely need an important jump in FX market volatility to stage a meaningful comeback as currently stable conditions favor riskier trades.

If global trading volume increases amidst a decrease in volatility, we would expect a larger flow of capital out of U.S. Dollar-denominated assets and into higher yielding and thus riskier currencies such as the Euro and Australian Dollar. Furthermore, the EUR/USD represents a substantial 37 percent of global daily trading volume; a prolonged period of relative “calmness” in currency markets could lead to an extension of the current Euro rally against the US Dollar.

Recent price action supports this theory, as the EUR/USD broke above a key descending trendline coinciding with the psychologically significant 1.3200 level. The AUD/USD exchange rate likewise trades at significant peaks and is less than 3% off of all-time highs. We expect that the US Dollar may fall further if recent market trends continue.