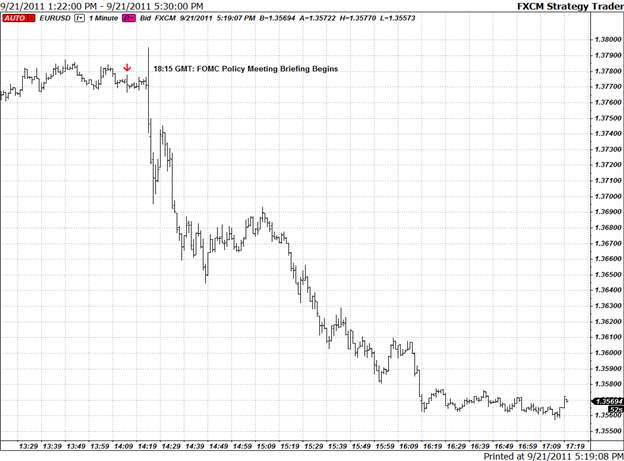 Earlier today, the Federal Reserve finished their extended two-day policy meeting, a much awaited event after Chairman Ben Bernanke left markets hanging in Jackson Hole, Wyoming. The Federal Open Market Committee’s decision to “keep the target range for the federal funds rate at 0 to 0.25 percent” was widely anticipated; in August, the FOMC announced they would leave rates on hold through “at least mid-2013.” The same tact was employed today, with the FOMC noting that they anticipate“that economic conditions--including low rates of resource utilization and a subdued outlook for inflation over the medium run--are likely to warrant exceptionally low levels for the federal funds rate at least through mid-2013.”

There was particular importance to today’s rate decision, more so than announcements in the past, given the climate of the global economy. During Chairman Bernanke’s much awaited speech at the Jackson Hole Economic Policy Symposium, he announced that no additional easing would be employed, a move that triggered a move to safety across various financial assets. Since then, speculation arose as how the Federal Reserve could help stimulate a faltering American economy, marked by high inflation, high unemployment rates, and low growth. As market participants’ grew confident over the past few weeks that the Federal Reserve would intervene, riskier assets, in particular equities, were bid higher.

The built-up expectations of another round of quantitative easing, in the form of another round of balance sheet expansion, were deflated quickly when the FOMC’s monetary policy statement was released shortly after 18:15 GMT. While there was a sharp but quick rally in higher yielding assets, such as the Australian Dollar, U.S. Dollar strength quickly ensued. The commodity currency block, comprised of the Aussie, the Canadian Dollar and the New Zealand Dollar suffered immense losses thereafter, ending the day down over 1.5 percent each against the Greenback. The Aussie fell by 2.73 percent, the biggest loser on the day.

Also hit particularly hard was the Euro. The EUR/USD, like the other currencies, initially found a small spike higher, but the gain was soon erased. The EUR/USD dropped by 0.94 percent on Wednesday, falling from 1.3770 before the decision, to as low as 1.3560 in the hours afterwards. The consequences for the Euro are potentially catastrophic now that the Federal Reserve will no longer be pumping liquidity into short-term money markets.

In terms of what the Federal Reserve will be doing, they announced that they would “extend the average maturity of its holdings of securities. The Committee intends to purchase, by the end of June 2012, $400 billion of Treasury securities with remaining maturities of 6 years to 30 years and to sell an equal amount of Treasury securities with remaining maturities of 3 years or less.” Theoretically, a flattened yield curve should boost capital flow into the United States, as well as make the U.S. Dollar more appealing. Indeed, the flight to the U.S. Dollar today after this announcement provides evidence of the markets’ broad expectation of further appreciation.

The statement also detailed the following conclusions the FOMC made during the inter-meeting time frame:

While the overall tone of the statement did not differ from those prior, it should be noted that three members of the Committee – Richard Fisher, Narayana Kocherlakota and Charles Plosser – dissented. The three dissenting votes is a signal to the markets that the further division amongst Committee will result in less-dovish behavior. The move away from what has been a Committee known for its dovish monetary stance towards a more hawkish outlook is bullish for the medium- and long-term implications of the U.S. Dollar, which now looks to gain in the coming weeks and months.