Will U.S. Nonfarm Payrolls Top Expectations And Place Additional Pressure on the EURUSD?

Following the ECB rate decision which fueled a selloff in the euro, currency traders will shift their focus to the highly anticipated U.S. nonfarm payrolls report for potential confirmation of a EURUSD turnaround. Economists are expecting payrolls in the world’s largest economy to climb to 145K in January after rising 103K the month prior. Heading into the report, market bias is dollar positive, and a better than expected report could add momentum to the dollar rally.

Taking a look at December’s report, payrolls rose 103K amid expectations of 150K, while private payrolls increased 113K. At the same time, the unemployment rate fell to 9.4 percent as the labor force participation rate scaled back. The breakdown of the release showed that average hourly earnings climbed 0.1 percent, while the unemployment to population ratio was unchanged at 58.3 percent. For this month's report, weather might have dragged down employment as severe weather conditions weighed on areas such as construction. However, I do not rule out an employment print of 140K or greater as the private sector gradually gains momentum.

Ahead of the release, ISM non-manufacturing composite rose to 59.4, marking its highest level since August 2005, with the employment component climbing to its highest level in over 7 months. Not to overlook, the Monster.com employment will be released tomorrow. The report is of great importance because the index measures overall employee demand from online recruitment activity, reviewing more than 1500 websites. In turn, an increase in the report may hint that hiring is picking up. It is also worth noting that consumer confidence is at a seven month high as households gain confidence that the economic recovery is gathering strength. Conversely of market expectations, Ben Bernanke held a press conference today and said that the unemployment rate is unlikely to decline as fast as the fed likes, while noting that growth is not fast enough for a significant turnaround in the labor force. Furthermore, Mr. Bernanke added that he sees some “good news” in the labor market, and expects more. Indeed, the comments by the central back head were fairly mixed; however, the payrolls release will add color to the blurry picture.

For the past two months, the employment report failed to meet expectations, with the result leading the dollar to push lower against its major counterparts. The selloff was largely due to increased expectations that payrolls would post a remarkable gain following the impressive ADP employment release which showed a surprising 247K print.The release failed to live up to market expectations, and as a result, currency traders punished the greenback. In January, ADP employment climbed to 187K. Though the reading bodes well for tomorrow’s nonfarm payrolls release, traders should not rule out another dismal release as the economic outlook for the U.S. remains uncertain.

All in all, traders should trade carefully ahead of the release as the dollar stands at the crossroads. Indeed, the release may add color to the bleak economic picture and pave the way for a profitable trade heading into next week’s session.Indeed, the dollar has been gaining momentum recently on the back of euro weakness, thus, a better than expected report will push the buck higher. Conversely, a dismal NFP figure may set the stage for a short dollar position as concerns surrounding inflation and the labor force remains. Nonetheless, gauging sentiment will be as important as the report itself.

The unemployment rate in the U.S. has fallen from a high of 9.9 percent in April to 9.4 percent in December, according to the U.S. labor department. Economists are now expecting the jobless rate to return to back to 9.5 percent in January. Maximizes 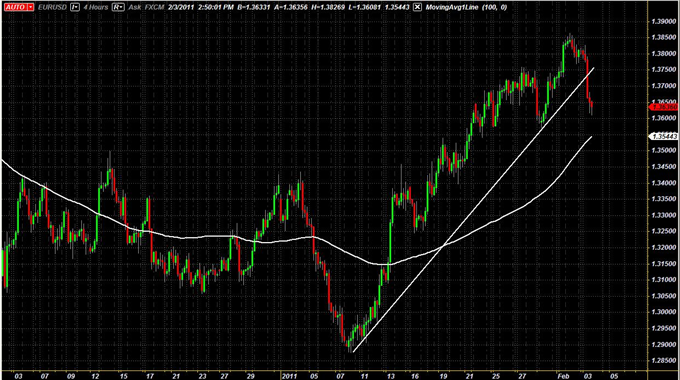 EURUSD: The pair as recently pushed below its rising trend line that was intact for a little less than a month. Indeed, the recent break below 1.37 opens the door to the 1.3570 area. It is worth noting that our speculative sentiment index now stands at -1.79 and is expected to push lower as traders bet on a euro pull back. With daily studies recovering from overbought territory, I do not rule out a further losses in the EURUSD.