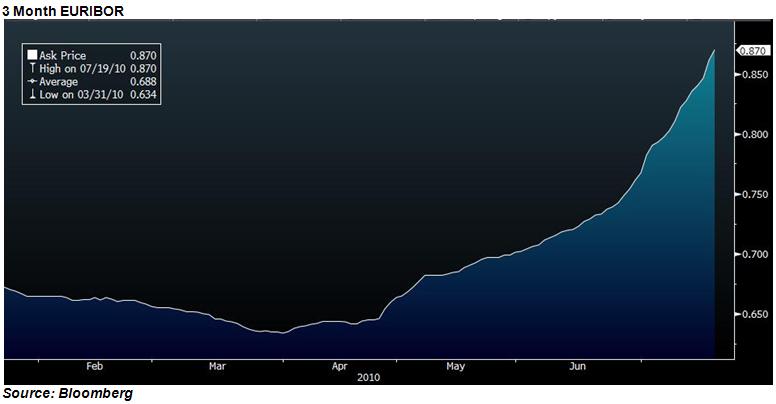 Talking Points
•    Trichet to Meet with Banks Two Days Prior to Published Results
•    Uncertainty About the Consequences Surrounding Failed Tests Remain
•    EURIBOR Surpasses 0.80 Percent For the First Time Since August 2009

The result of Europe’s bank stress tests are expected to restore confidence in the financial system this Friday. However, it is not clear whether the outcome will achieve this goal as many details regarding the stress measures lingers. The tests will include 91 banks, with two thirds in the public sector, while the outstanding one third will include banks across the private sector. Furthermore, the number of banks will be comprised of a minimum of 50 percent of the lenders in each country and 65 percent of the sector in the region.  Leading up to the highly anticipated announcement, Bloomberg News stated that Hypo Real Estate Holding has failed the Europe wide stress tests. On the other hand, all is supposedly well in Greece according to Finance Minister, George Papaconstantinou as he recently said that all banks in region are expected to pass.

Prior to the release of the results, European Central bank President, Jean-Claude Trichet is rumored to meet with banks on July 21st, according to an article by Reuters. The meeting is expected to discuss the consensus of publicizing the outcomes, and will evaluate whether any of the commercial lenders will need to recapitalize their balance sheets. Indeed, the tests that will be conducted will include a sovereign risk scenario, a baseline macroeconomic forecast for the rest of this year and 2011, and an adverse macroeconomic situation. In particular, the adverse scenario which assumes a 3 percentage point deviation of GDP is of some concern as economic activity may underperform the baseline by more than 3 percent if another slowdown occurs in the region as predicted by many economists as governments scale back stimulus measures to battle the ballooning budget deficits.

Additionally, the “haircut” measures have added additional weight onto the credibility of the stress tests thus far. Haircuts are percentages in which an assets market value will be reduced, regarding capital requirement for those who are exposed to debt in countries like Spain and Greece. There have been rumors circulating by Reuters that Greek debt is expected to be a haircut of 23 percent, but will only pertain to trading books. It is also worth noting that the stress parameters have not been specified of what will occur if banks fail these stress tests. Some analysts speculate that the consequences of a failed outcome will result in a minimum tier one capital ratio.

All in all, as the euro continues its northern journey, despite the pullback in the equity markets and ongoing concerns in the 16 member euro area, we may see the single currency re couple with risk if the scrutiny of European lenders fails to show that banks have enough capital to withstand another shock to the financial system. In turn, if the results are as ghastly as some market participants believe, a flight to safety across all asset classes will likely be the outcome.

The three month EURIBOR rate, one of the euro-zone’s principal money market indicators continues to push higher on the back of credit risk conditions, rather than lack of ECB liquidity. The EURIBOR3MD is fixed at 0.860 percent. The three month euro libor has risen above 0.80 percent for the first time since August 2009. 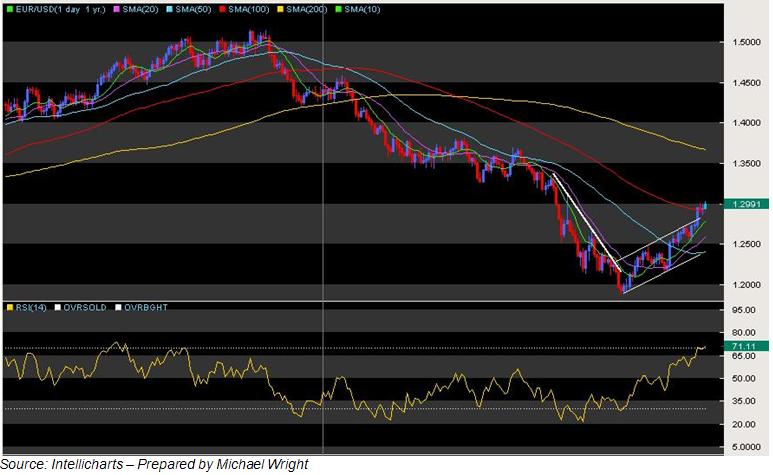 The euro continues to rally against the U.S. dollar as price action recently broke above the 100-day SMA. As of today, the EUR/USD exchange rate stands at 1.2971 following the massive rally from the yearly low of 1.1876. At the same time, daily studies are showing that the pair is in oversold territory, thus, traders should not rule out the EUR/USD breaking back below 1.29 as we continue to see a lackluster performance in the pair. Additionally, the Purchasing Power Parity now stands at 13.46%, down from its extreme level of 24.35% in the November, a signal that the euro may bottom out in the near term versus the U.S. dollar.