Add the Trading Session Hours Indicator to your own Forex charts atFXCM Apps.

Despite some dips and gains, the Dow Jones FXCM US Dollar Index closed the week less than 20 points away from the open, as a mix of good and bad US economic data may have left greenback traders with unchanged outlooks for future Fed policy.

The Dollar saw a bit of volatility on Monday, despite a lack of significant economic releases, and on Tuesday, greenback trading was fairly quiet despite the release of a number of medium importance data. Most notably, German inflation set a 3-month high in April but still fell short of expectations. In reaction, the Euro declined 40 pips against USD.

The US Dollar fell 35 points over the NY trading session on Wednesday on a combination of the GDP release and the announcement of the Fed rate decision. The US economy only expanded 0.1% (annualized) in the first quarter, disappointing expectations for 1.2% growth. USD/JPY fell 30 pips on the release of the disappointing GDP. Then, the FOMC announced it will taper monthly asset purchases by another 10 billion dollars, as was expected, and the forward guidance was fairly in line with comments from the March meeting. However, the GDP miss still scared traders into selling the US Dollar further after the Fed release.

Finally, the US Dollar posted a 50 pip gain and rose to a 3-week high against the Japanese Yen on Friday morning, on the announcement that 70 thousand more US jobs were added than expected in April and the unemployment rate fell to 6.3%. However, all those greenback gains were soon unwound, possibly as traders read further in the report to discover that the labor pool shrunk by 806 thousand in April.

We already knew that the weather had taken a serious toll on US economic growth in the first quarter, and a rebound in employment in the first month of Q1 was also somewhat expected as weather improved. Therefore, it is likely that the contradicting GDP and NFP releases fit in with the Fed’s previous outlook for economic performance. That may be the reason the dollar settled in so close to the weekly open despite the onslaught of high-risk trading events. 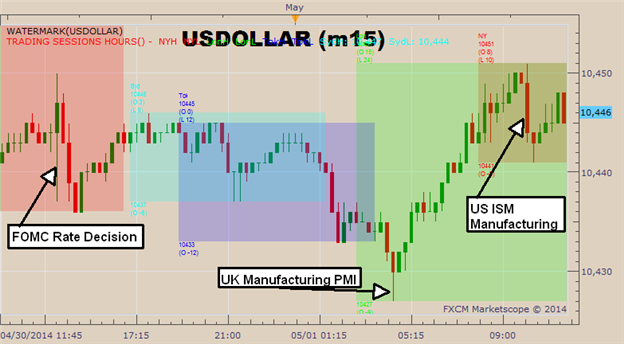