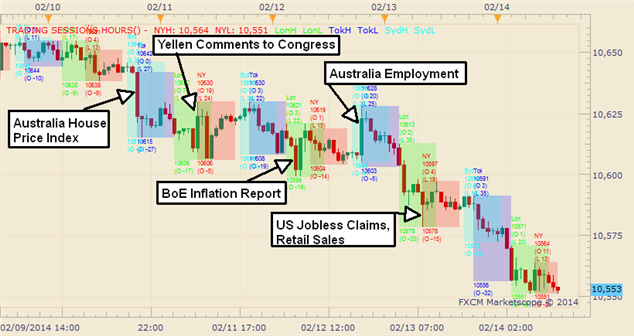 The Dow Jones FXCM US Dollar Index is close to completing 10 consecutive days of declines, barring an unexpected rally in the last few hours of trading. However, it is hard to explain the past week’s weakness with economic events, rather there seemed to be a general bias for selling the greenback in Forex markets.

Although there was no single event in the past week’s calendar to explain the bearish bias, the data releases for the January and February period continued to disappoint expectations, especially when you also consider the weak Non-Farm Payrolls expansion reported last week. We heard from new Fed Chair Yellen this week that only a notable change in the economic outlook could slow the pace of taper, and dollar traders may be considering if the constant stream of disappointing news may be strong enough to do just that. That may be the reason for the continued dollar weakness for the second week.

The trading week began with only a slight decline in greenback trading, as news was light for the first 24 hours. Then, the US Dollar moved below 10,625 on a release of better than expected Australian House Price Index and NAB Business Conditions between Monday’s and Tuesday’s trading; AUD/USD popped 50 pips on the releases.

The US Dollar took a brief rally higher on the release of Yellen’s prepared comments for her congressional testimony; the comments pointed to a continuation of current Fed policy and measured taper steps. However, those gains were slowly unwound through the rest of the Tuesday session.

Wednesday’s dollar trading showed only a slight move lower, shrugging off most of the losses seen after Pound rallied on improved BoE economic expectations.

Between Wednesday’s and Thursday’s trading, the US Dollar rallied 60 pips against the Australian Dollar on the highest Australian unemployment rate in 10-years. But the greenback rally was unwound over the London and New York Session, culminating with a disappointing release of US Jobless Claims and Retail Sales.

US Dollar Index trading on Friday lacked any new catalysts to explain the continued weakness, thereby further supporting that much of the greenback declines was caused by general sentiment and not specific data releases or events.