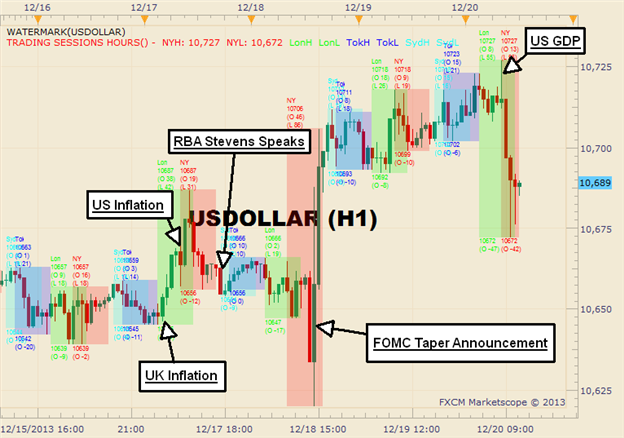 Graphic Rewind: US Dollar Gives Up Taper Gains in the Week's Final Hours

The Dow Jones FXCM US Dollar Index rallied to another 3-week high over the past week on the surprise taper decision, but most of the gains have been unwound in the final hours of this week’s trading.

The trading week started quietly, with little movement over Monday’s session and during the overnight hours going into Tuesday. Then, the US Dollar popped higher during Tuesday’s London session. The beginning of the move followed Pound weakness on lower than expected inflation, but the move continued higher into the start of the NY session and ignored a disappointing US inflation release.

Trading was quiet between Tuesday and Wednesday, despite a brief Aussie pop on some comments from RBA Governor Wheeler. Wednesday then brought the major volatility of the week, after the Fed announced a 10 billion dollar cut to its monthly asset purchases. The US Dollar initially gained on the news, then the greenback temporarily ran into some weakness on some Bernanke comments, before rallying even higher.

Finally, the US Dollar gave back some of its gains today in the NY session, despite a lack of significant news at the time. The greenback rallied briefly on a better revision of the US GDP growth for Q3 before heading lower to end the week.