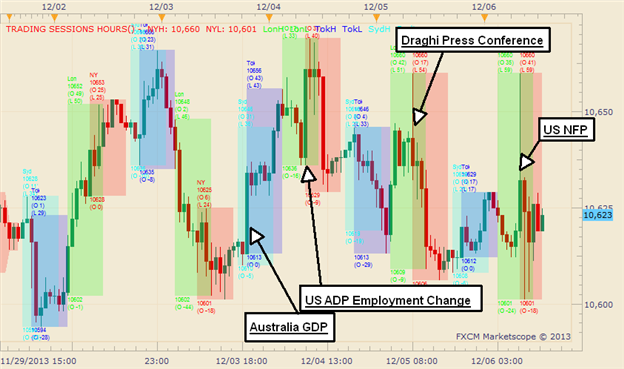 The Dow Jones FXCM Dollar Index spent the week testing, but not breaking, the highs and lows of a 2-week trading range, and it was only apropos that the greenback continued to do just that following a dramatic US employment release.

The greenback began the week by rallying on Monday and then continuing to set a new 2-month high in the beginning overnight trading, leading into Tuesday. Much of the volatility may have been due to the excitement for the upcoming ECB rate decision and US NFP release.

However, the gains were pared even quicker than they were made. Then, overnight between Tuesday and Wednesday, the US Dollar rose against Aussie weakness, following a weaker than expected Australian GDP release. That rally was perpetuated further by a better than expected ADP employment change- a good omen for Friday’s NFP’s.

Again, likely the result of anticipatory trading, the US Dollar whipped lower and higher between Wednesday’s and Thursday’s NY sessions. The greenback set a new 2-week high on Thursday on improved US GDP for Q3, but those gains were erased as the Euro soared higher on a less-dovish than expected ECB President Draghi.

Finally, the US Non-Farm payrolls beat expectations, but the initial US Dollar rally to the top of the 2-week and 75 point range was quickly erased, and the index touched the bottom of that same range. It’s tough to fully explain the bipolar reaction to the release, and please read Chris Vecchio’s in-depth analysis for better understanding of the release. In the end, the US Dollar didn’t keep any lasting gains or losses following NFP’s, and the week looks ready to close right near where it started.