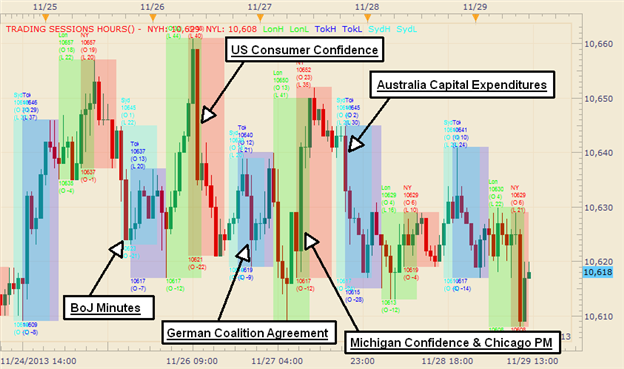 Graphic Rewind: USD Stumbles Into a 2-Month High Despite Lack of Critical Data

The Dow Jones FXCM US Dollar Index set a new 2-month this week before declining close to the weekly open and just above 10,600.

The US Dollar set the first new high on Monday despite a slow news day. Then, the greenback declined in overnight trading between Monday and Tuesday on the release of BoJ Minutes. The minutes showed dissent from three board members regarding the inflation forecast language. However, those dollar losses were soon erased and the greenback set the weekly high at the start of the NY session on Tuesday.

Then, a sharp decline in dollar trading commenced on disappointing US consumer confidence through the rest of Tuesday’s trading. The US Dollar touched a four day low on Euro strength; German talks between parties had ended with a coalition deal.

The US Dollar saw the final rally of the week on Wednesday morning, when the Michigan Confidence release and the Chicago Purchasing Manager release were each announced better than expected. But that rally was reversed on Aussie strength, following the release of strong capital expenditures.