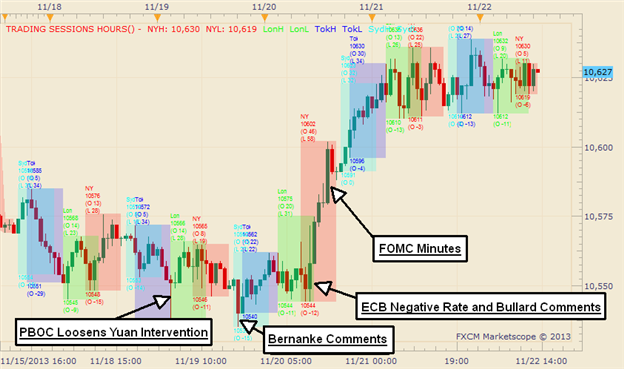 The Dow Jones FXCM US Dollar Index saw a mid-week rally as comments from the Federal Reserve seemed to have raised traders’ expectations for the possibility of a taper of quantitative easing in the December meeting.

On Monday and Tuesday, the dollar slowly declined to new weekly lows on a mix of economic data, and then on the announcement that the PBOC will loosen Yuan intervention.

Between Tuesday and Wednesday, the US Dollar hit the low of the week on Fed Chief Bernanke’s comments that there might be a delay between the end of quantitative easing and the first rate hike.

However, the greenback losses on those comments were reversed on Wednesday morning, when Bloomberg reported that the ECB is considering cutting the deposit rate to -0.10%. Then, FOMC member Bullard said that a taper of QE is still on the table for December, which sent the US Dollar even higher.

Finally, the minutes from the last FOMC meeting said that the Fed will likely taper in the coming months on better data. The US Dollar not only rallied a bit in the hour after the release, but the greenback continued to take gains in the Asian market hours on dollar bullishness.

Today, the US Dollar continued to rally and came just two points short of setting a new 2-month high.