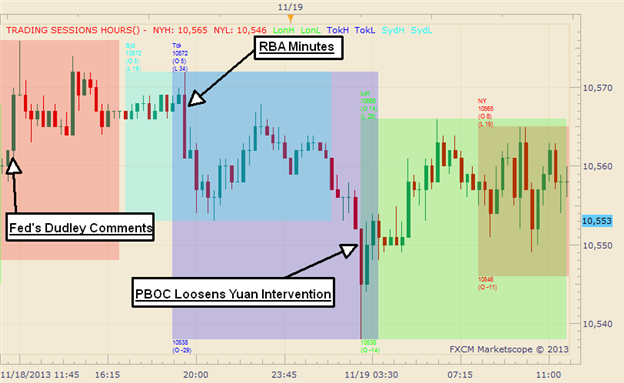 Graphic Rewind: US Dollar Falls to a Weekly Low on PBOC Yuan Reforms

The Dow Jones FXCM Dollar Index set a new weekly low on news out of Australia and China.

The US Dollar started the second half of the NY session on Monday with a brief spike on comments from Fed’s Dudley. Dudley sounded hawkish when he said that inflation will rise towards the Fed’s target and that he’s hopeful that the economy is rebounding. However, the greenback erased those gains when Dudley made a few dovish statements during a question and answer session.

Overnight between Monday and Tuesday, the RBA released the minutes from its November policy meeting. The comments did leave open the possibility for further rate cuts, but the general optimistic tone sent the Aussie higher against major currencies like the Dollar.

Finally, at the beginning of the London session, the US Dollar fell further on an announcement from PBOC Governor Zhou that the central bank would loosen controls on the Yuan exchange rate. But the drop to the weekly low in the Dollar Index was temporary, as the greenback recovered over the London session.