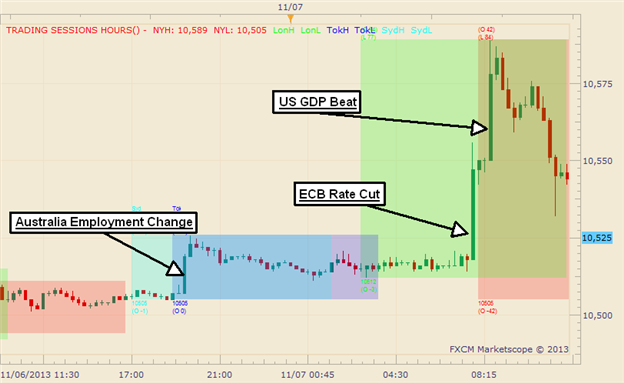 The three major market events over the past day of trading all moved the Dow Jones FXCM Dollar Index higher, but index then erased almost all of those gains in the NY session.

The US Dollar saw a small rise in the beginning of the Tokyo session, as a severe disappointment in Australia employment change sent the Aussie lower against major currencies.

Then, halfway through the London session, the US Dollar Index ripped 70 points higher to a new monthly high, first on a surprise cut to the ECB target interest rate, and then on a better than expected US GDP print for Q3.

However, the Dollar index slowly erased almost all of those gains through the rest of the NY session. The decline in the greenback index coincided with a sudden drop in US equities. Furthermore, currencies are showing a clear risk-off trend in today’s trading; the Yen, Pound, and Dollar are winning, while the Euro, Kiwi, and Aussie are losing.

The rate cut in the Euro-zone sent the Euro lower despite the fact that it will ultimately help the European economy, because it lowers the rollover reward for those holding long Euro. The rate cut’s help to the European economy was quickly echoed by various leaders from around the Euro-zone. However, the UK will also benefit from a strong Euro-zone, meaning the Pound benefits from an ECB rate cut without the hit to the rollover rate, which is why the Pound is rising despite today’s risk-off environment.