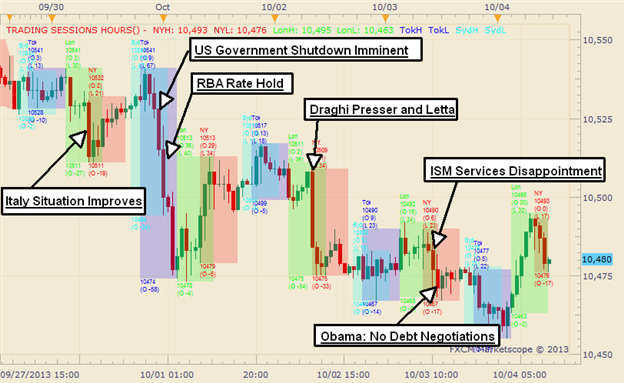 Following last week’s range bound trading of the Dow Jones FXCM US Dollar Index, this week the greenback continued lower and set a new 5-month low before the end of the week. Although the major news story of the week was the US government shutdown, that was only one of many factors eating away at US Dollar strength.

The index declined on Monday following a story in Italy that some of Berlusconi’s fellow PDL party members were threatening to form their own party if Berlusconi withdraws PDL’s support for PM Letta’s coalition. The threat of new elections in Italy seemed to present itself as a threat to Euro-zone stability, and Letta needed either some of PDL’s lawmakers’ support or opposition support to survive a confidence vote. So, the headline about the potential breakaway from the party improved confidence in Euro-zone stability and sent the Euro higher against major currencies like the US Dollar.

Then, on Monday night, as the last ditch efforts to arrive at an agreement in the US congress failed, the US Dollar declined further into the shutdown deadline. Shortly after, the RBA used a less dovish tone in the comments accompanying a no-change interest rate decision. The comments sent the Aussie higher against all pairs, prompting a further fall in the US Dollar index.

On Wednesday, the Dollar Index declined significantly below 10,500 on Euro and Pound strength. The European currencies were sent higher by a combination of an ECB President Draghi press conference and the announcement that PM Letta had survived a confidence vote in the Italian Senate.

On Thursday, a disappointing ISM non-manufacturing index release sent the US Dollar lower in most major pairs, but a lot of that move was quickly unwound. Then, US President Obama spoke about the ongoing shutdown crisis, and said he is unwilling to negotiate over the upcoming debt ceiling. The US Dollar fell further, as many traders are looking at the shutdown political deadlock as a preview of the upcoming need to raise the debt ceiling before a potential default on October 17. Obama’s hardline comments raised traders’ fear of the more drastic outcome should a US default occur.