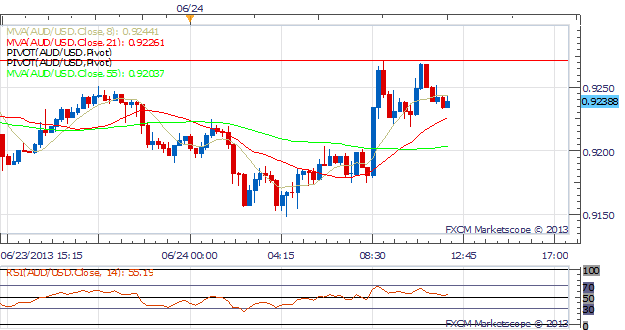 Although today is a lighter economic data day, it is interesting to watch where assets trade now that investors have had a weekend to digest Fed Chairman Bernanke’s statements. The only noteworthy data release was German Ifo Business Climate figures, which met Bloomberg News survey expectations of 105.9. The Dow Jones FXCM Dollar Index (Ticker: USDOLLAR) falls -9 (-0.08%) on the day to 10733 at the time of writing.

Commodities and FX markets do not mirror the same magnitude of declines today. Crude oil is modestly down today: WTI -0.16%; Brent -0.86% at the time of writing. Although, base metals keep getting hit as COMEX Copper falls another -2.56% today at the time of writing. As previously noted, the USD Index shows a slightly weakening dollar today, breaking the previous upside momentum.

The Aussie is undecidedly volatile today, trading between $0.9150 and .9250. The pair tried to rebound off of its recently made significant lows when trading opened on Sunday evening. The AUDUSD reached as high as .9250 before being slowly taken down to .9146 near London Open. During New York Open, the AUDUSD surged +84 pips before meeting resistance at the monthly S1 pivot: .9271. The AUDUSD is net +23 pips higher today at the time of writing. 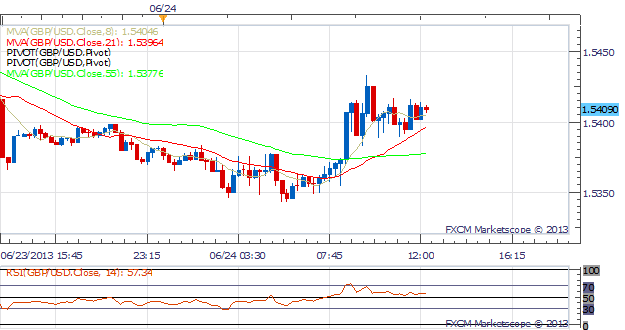 The GBPUSD is flat on the day with large selling pressure as soon as Sunday markets opened. The pair was a sluggish mover into London Open, with a slow decline towards $1.5350. The pair then bounced off of this support and easily moved through 1.5400 during New York Open before consolidating just above 1.5400 through London Close. 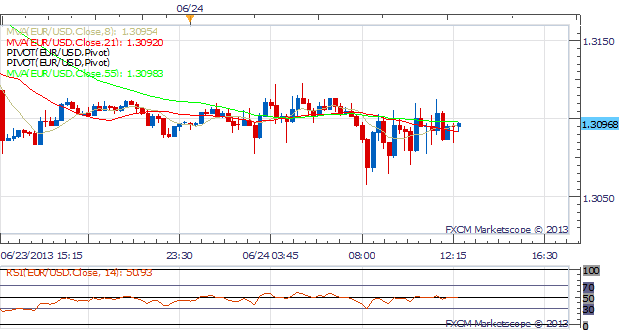 The EURUSD is net -20 pips lower today after a sharp down move at Sunday market open when traders pushed the pair below $1.3100. However, there was not much momentum to push the pair much further than that. The EURUSD bottomed at 1.3057 near New York Open and has been largely range bound around the 1.3100 handle throughout New York trading. 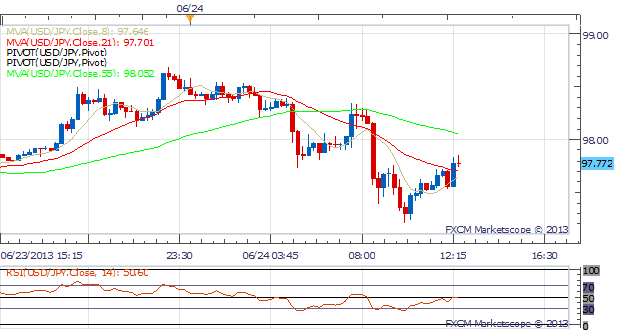 The USDJPY remains as an interesting pair to watch as the pair trades lower for the first time in six trading days. The USDJPY attempted to continue its bull run at the beginning of Asian hours but was eventually shut down towards London Open. The pair managed to break sharply below the ¥98.00 level near New York Open and traded below this level throughout most of New York Hours and London Close. The pair is attempting to make a rebound towards 98.00 at the time of writing.