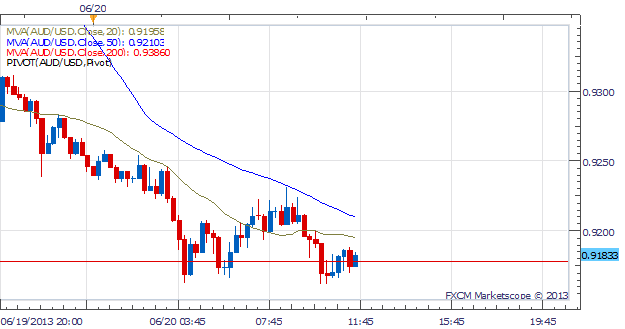 Reverberating Aftershocks From Fed Policy Shuts Down AUD and JPY

The USD continues its strong gains today after unexpectedly hawkish FOMC commentary hints that QE tapering may occur by the end of the year. The Dow Jones FXCM Dollar Index (Ticker: USDOLLAR) gains +78 (+0.731%) on the day to 10741 at the time of writing. This is the index’s highest reading since June 6. Bonds continue their losses as 10YR US treasury yields increase +3.6bps (+1.53%) to 2.389% at the time of writing. Yields reached a high of 2.469% during European hours but yields declined after New York trading commenced.

The AUDUSD is a heavy decliner today, falling -95 pips (-1.024%) to $0.9183 at the time of writing. This marks the lowest level since September 2010 as falling gold prices, bearish Chinese news, and risk-off sentiment add fuel to Aussie bears. The currency moved lower throughout Asian trading until making a low of .9162 soon after London Open. The red horizontal line above is the weekly S2 pivot level and it served as rough support for the AUDUSD at .9178. There was a rough +40 pip rally towards New York Open, but this was quickly sold off and the pair remains around the S2 pivot at the time of writing. 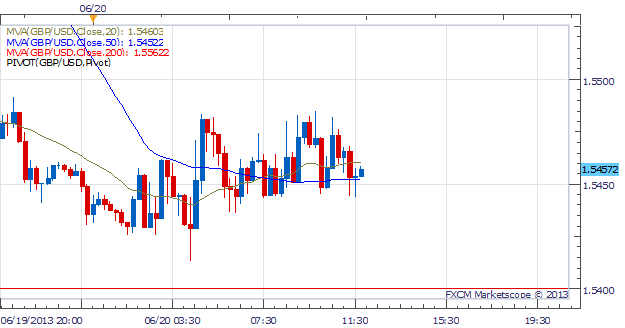 The GBPUSD declines -15 pips (-0.097%) to $1.5457 at the time of writing. Most of the selling occurred during Asian hours and the pair regained much of its losses soon into London trading and managed to hold its prices through London close. The cable remains range-bound between 1.5491 – its Asian session high—and 1.5430 through most of today’s trading. 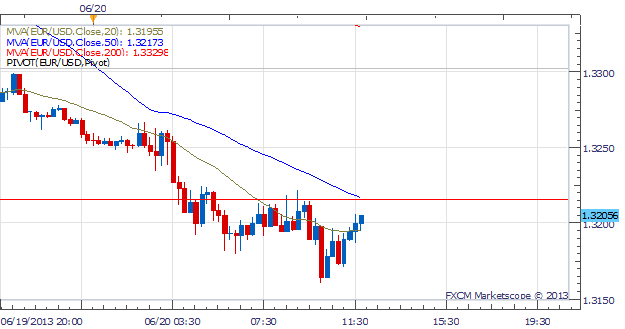 The EUR/USD is also down today, falling -75 pips (-0.564%) to $1.3205 at the time of writing. The pair declined throughout all of Asian trading and through most of London hours until finally rebounding towards London close. The low was made at 1.3160 and the pair currently moves up towards the weekly S1 pivot of 1.3215, which served as resistance for most of London hours. 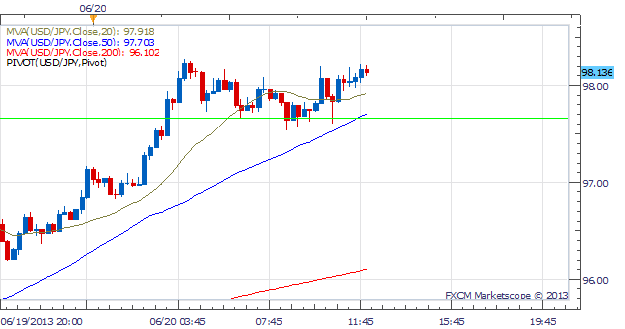 The USDJPY remains as one of the most interesting pairs to watch as the pair continues its long-term rise. The USDJPY fell through the psychologically important ¥100.00 level on June 3 and declined to as low as 93.77 on June 13. However, the FOMC meeting yesterday provided the USDJPY enough power to reach its current 98.13 level as people are again becoming bullish on USDJPY. The pair traded up to 98.27 before giving back some of those gains. The pair remains range bound at the time of writing, between the 98.27 high and the weekly R1 pivot providing support at 97.65.