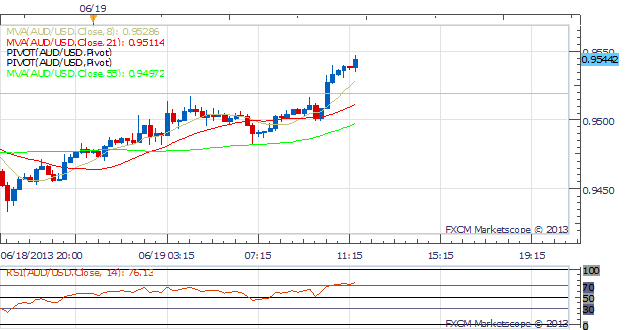 THE TAKEAWAY: USD weakens ahead of today’s FOMC meeting > EURUSD, GBPUSD, AUDUSD all gaining on the day > USDJPY weakening on the day.

Markets anxiously await today’s FOMC meeting at 14:00 EDT / 18:00 GMT, which is likely one of the most important events this quarter. All eyes are on the Fed and their corresponding rhetoric concerning QE tapering. Due to the significance of the event, investors are positioning themselves by either leaving their trades to avoid large volatility and event risk, or on balance shorting the USD based on price action today. Theoretically, a delay in tapering relative to market expectations would cause the USD to weaken because interest rates would stay low and money supply would be comparatively higher. Note that the Dow Jones FXCM Dollar Index (Ticker: USDOLLAR) falls -35 (-0.331%) on the day to 10515 at the time of writing.

The AUDUSD traded higher across Asian, European, and New York sessions. The pair started the trading day at $0.9463 and remains about +81 pips up to .9544 at the time of writing. Price action shows the AUDUSD met some resistance at .9500 and broke upwards at New York Open. 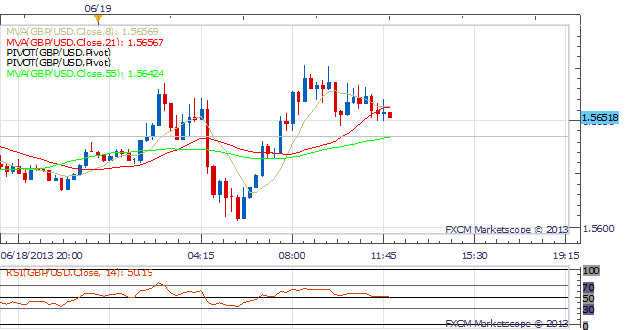 The GBPUSD 1.5629 inches net +21 pips higher today to $1.5650 at the time of writing. The pair sold off -50 pips near London Open but regained most of that later throughout the European session and into New York Open. The pair continues to find near-term support near 1.5650 through London Close as the pair continues to consolidate ahead of the upcoming FOMC meeting. 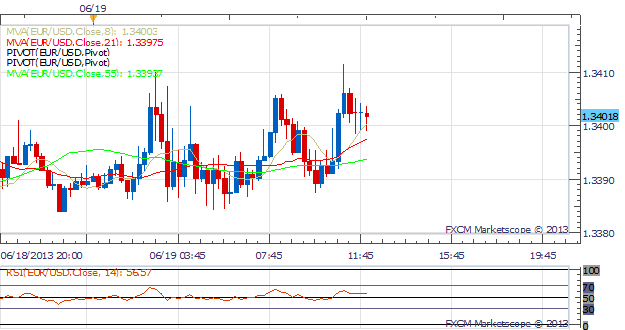 The EURUSD remains mostly range-bound today between $1.3380 to 1.3405 with the pair hovering below the 1.3400 level through most of European trading. The three rallies up past the 1.3400 figure were subsequently sold off not much longer—first during Asian Open, next heading into London Open, and then midway through the London session. The pair is currently past the 1.3400 level and price action will dictate whether the pair sells off similar to before or is able to sustain this price. Overall, the EURUSD trades +10 net on the day to 1.3401 at the time of writing. 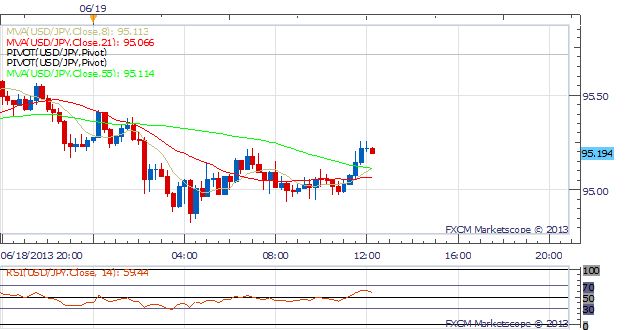 Following the trend of USD weakness today, the USDJPY decreases -38 pips to ¥95.19 at the time of writing. The pair moved generally lower throughout the Asian session, which brought the pair down towards 95.00 support. The pair briefly dipped below this 95.00 level but bounced back above during London open. Price action then stagnated right around the 95.00 for much of European trading, with a small rally towards London Close.