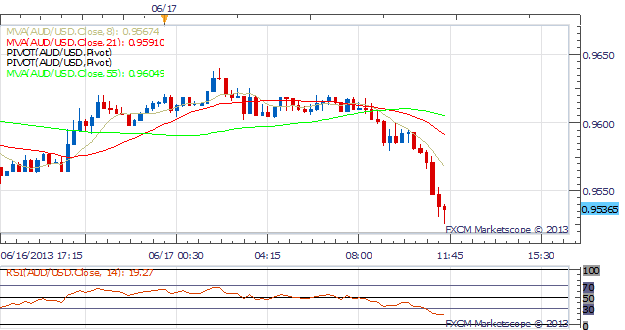 THE TAKEAWAY: USD gains on the day and USDJPY moves up towards ¥95.00 ahead of Wednesday’s FOMC meeting.

However, the FOMC enthusiasm is not unilaterally shared in bond and FX markets today. 10YR US treasury yields gain +1.1bps (+0.51%) to 2.140% at the time of writing. However it should be noted that 10YR treasuries had a large -9.85bps move over two days from last Wednesday’s high. Yields are now their lowest since June 7. The Dow Jones FXCM Dollar Index (Ticker: USDOLLAR) gains +32 (+0.30%) to 10519 at the time of writing.

The AUDUSD moves -32 pips lower from Sunday’s open at the time of writing. The pair consolidated around the .9600 level for much of the trading sessions before quickly selling off around 14:00 GMT. Although US equities move higher today, the carryover risk sentiment is not reflected in the Aussie. The AUD has been the worst performing currencies this past month, trading -1.97% against the USD. Even though the pair has rebounded as of late, it is evident that there are still plenty of sellers for this pair in light of a stale Chinese economy. 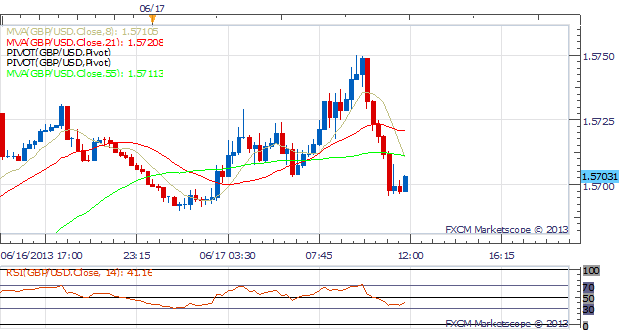 The GBPUSD has been unable to sustain its heavy upwards momentum as of late. Today marks its second straight day of declines after four straight increases the prior four days. Traders are unsure where to move the pair as can be seen by the relatively tight 50 pip range between $1.5700-1.5750 where the pair has traded for most of today. Similar to the AUDUSD, a strong USD rally around 14:00 GMT moved the pair 50 pips lower to 1.5700 support, where the pair trades at the time of writing. Tomorrow’s British CPI data should be watched as a potential market mover: Bloomberg News survey expects a +2.6% YoY increase. 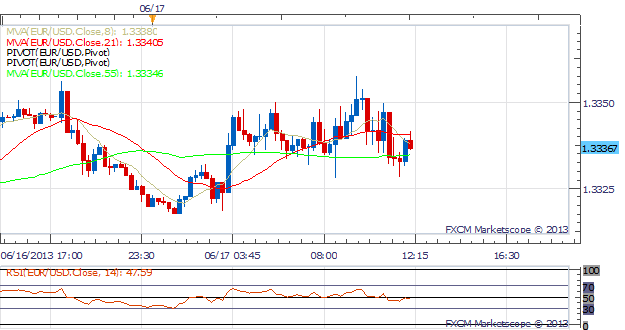 The EURUSD price action is relatively neutral on the day, with the pair trading at $1.3334 at the time of writing. Similar to the cable, the EURUSD also faces its second straight day of declines after four consecutive days of gains the previous four days. Significant price action shows a rejection of the 1.3350 level around 14:00 GMT. The pair has been trading mostly sideways in the past two trading days, unable to stay above 1.3350 resistance or below 1.3300 support for a meaningful amount of time. 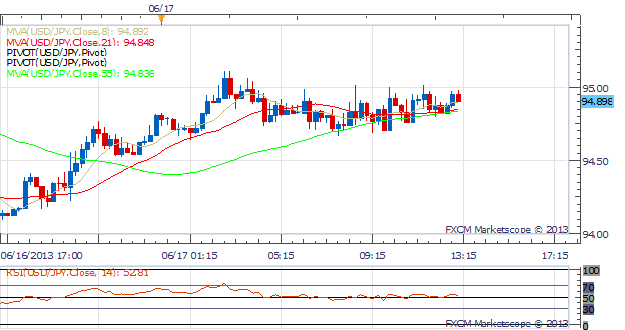 The USDJPY breaks its streak of four consecutive daily declines and makes its way up to ¥95.00. The pair slugs up 80 pips on the day to 94.90 at the time of writing. The pair was rejected at the 95.00 level around 7:45 GMT, but the rejection was rather minor. The pair continues to trade above the 94.70 level for almost the entirety of the European session after the 95.00 rejection near London open.