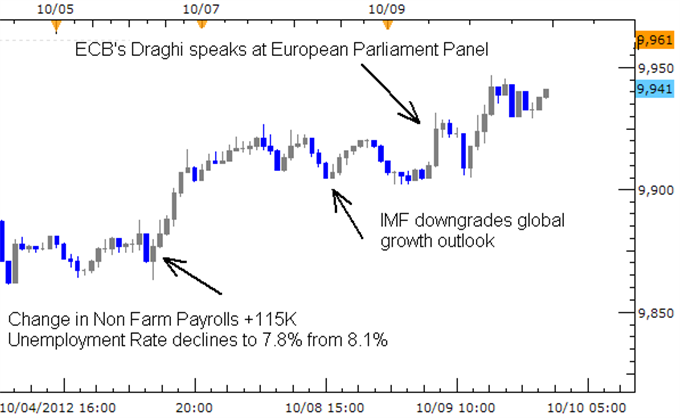 THE TAKEAWAY: Greenback continues gains on improved US employment while the IMF's downgraded global growth set the stage for risk aversion.

The Dow Jones FXCM US Dollar Index (Ticker USDollar) continued its gains from last week as the US economy showed signs of an improved labor market while the International Monetary Fund set the stage for risk aversion on downgraded global growth projections. On October 5 at 12:30 GMT the US economy reported the much anticipated nonfarm payrolls report which suggests the world’s largest economy added 115 thousand new workers to their labor force helping to press the unemployment rate lower to 7.8 percent in September, down from 8.1 percent in August.

A few days later on October 9, the International Monetary Fund released its World Economic Outlook forecast downgrading both advanced and emerging market growth projections for 2012 and 2013. The report likely didn’t surprise market participants as output projections have been largely reduced by many analysts throughout the last few months. Never-the-less, the IMF’s dour projections may have set the stage for risk aversion hours before ECB’s Mario Draghi began his speech at the European Parliament Panel. Markets appeared to be acting on “risk-off” sentiment as the flight to security pushed the greenback higher when Draghi highlighted ‘economic risks to the downside’ and a weakened Eurozone in the third quarter. The Euro declined sharply against the Dollar.

Looking ahead, the US docket includes mortgage applications, wholesale inventory changes, trade balance, initial jobless claims and the Fed’s Beige Book report. Moreover, earnings season is about to kickoff in full force over the coming weeks which could stoke risk aversion if profits fall short of expectations. It’s also worth noting that the rate of change in US corporate profits have fallen sharply over the last few quarters. 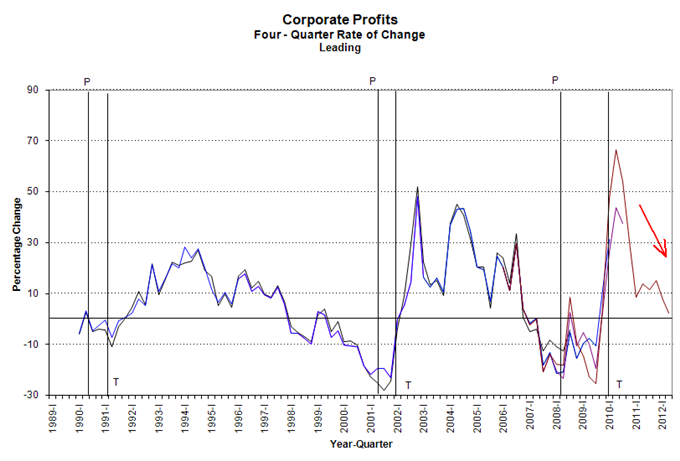