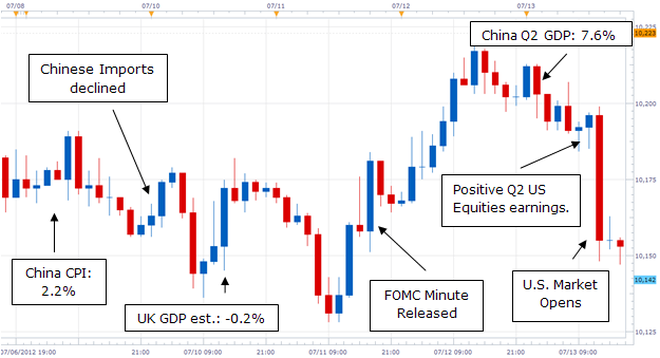 The FXCM USDollar Index (Ticker: USDollar) traded in opposition to the US equities market on the risk theme set by the start of earnings season. To add to market fears China lunched a massive data dump on the market.

China released over 20 notable economic figures at unannounced times during this past week. The market was particular concerned due to fears over China’s growthprospects. The growth has been a source of escape for investors from the stagnate western economies. On Monday it was noted that the economy was facing typical inflationray pressure, but had seen a drop in imports. The drop in imports sparked a blitz to the US Dollar as market participants abandoned commodity currencies that would be affected first by a slowdown in the Chinese economy.

On Tuesday the USDollar Index saw an additional up swing after an early UK GDP estimate predicted a third consecutive quarter of contraction in the British Economy. The UK had launched a number of stimulus programs recent months, but the market remains vary reactive to negative news due to worries of a Euro-Zone Contagion.

The USD rallied on Wednesday as the US equities market pulled back, and surprisingly during mid rally the currency market reacted to the release of the June FOMC Minutes. The Minutes had not reveal any new information, but they made it clear that QE3 is not yet own the table. As result the US Dollar rose when the fear of dilution was removed.

The rally ended on Friday when the Chinese announced mixed economic data, showing growth in the retail sector but declines in GDP. The declines in the USD signified that the market was expecting a bleaker outlook for China. In addition the quarterly earnings for JP Morgan were better than expected, which lead to an almost 50 point drop in the US Dollar Index as investor took on risk in the equities market.

The week finished up with the US equities market in a risk on up trend that drained some of the value from trading a safe haven currency. Although next trading week will be started off by the IMF updating its global growth forecasts, and a worst then expected figure may increase the demand for the US Dollar.