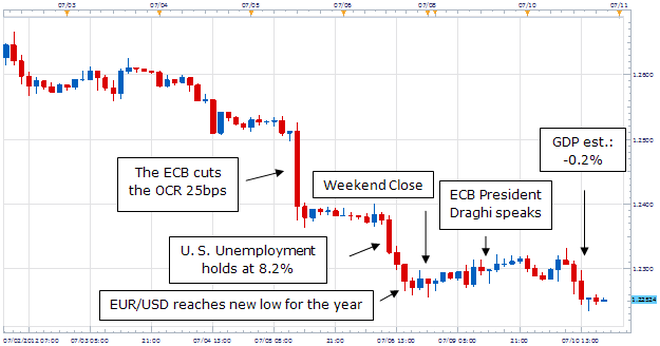 Over the past week the EURUSD erased the gains made during the EU Summit, and carved out a new low for the year. The pair now sits 360 pips (at time of writing) away from the 2010 low, of 1.1884, that occurred a month after the first Greek bailout.

On Friday the pair closed for the week below the previous year low of 1.2286 set on June 1st. The EURUSD briefly lifted above the 1.2286 mark fallowing the European Central Bank President Mario Draghi’s speech. Though the speech its self did little to move the market; which came at some surprise given that Draghi promised to talk about the recent ECB rate decision that had moved the EURUSD nearly 150 pips. The ECB president made it clear in his address that well he believed bold action would be necessary to contain the Euro-Zone crisis; the ECB’s primary goal during this crisis will be to maintain price stability. Market participates had already priced in a non cooperative ECB last Thursday, so the president’s statement contributed little to the price action on Monday. The Euro continued to sell off today after the National Institute of Economic and Social Reasearch predicted a third consecutive quarter of contraction in the British economy.

It is apparent that traders have lost the confidence that was present in the market following the EU Summit, and are now fleeing back to safe haven currencies. What is uncertain is how the market will react to the new low set today, keeping in mind that the EURUSD is currently 360 pips above the 2010 low.