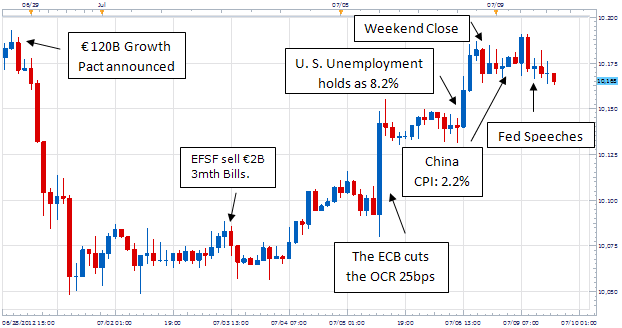 During the past Week the FXCM Dollar Index (Ticker: USDollar) rallied back to pre EU levels, reaching a high of 10,190 this morning. The gains came as investors gradually lost confidence in the market and returned to safe haven currencies such as the US Dollar.

As mentioned previously traders adapted an optimistic outlook following the EU Summit, on the hope of a coordinated stimulus efforts by the European Central Bank to support the stimulus measures announced by the European Council. Investor confidence fled the market last Thursday when the ECB’s President Mario Draghi only offered a 25pb rate cut to the European stimulus efforts. The FXCM US Dollar Index popped 70 points fallowing the European Central Bank’s press conference. The rally in the US Dollar continued on Friday when the US released neutral unemployment data.

This week started off with the Index hitting a high of 10,190 after China posted stable inflation, which makes for favorable business conditions. The US Dollar began to ease off that high in the wake of speeches from four Federal Reserve Presidents; Evans, Rosengren, Williams all hinted at to the possibility of another round of Quantitative Easing, well Lacker stated that he did not see the need for further stimulus. Speculation for QE3 and the affect it has on the US Dollar may resurface leading up to the release of the FOMC minutes on Wednesday. Although the affect QE 3 speculation may be drowned out by the start of earnings season that is scheduled to begin today with the release of Alcoa’s Q2 earnings.