The ASX 200 has been slammed in a global rout of risk assets after US CPI came in above expectations. At the close of the North American cash session the S&P 500 lost 4.32% and the Nasdaq 100 dropped 5.16%.

Growth linked and commodity currencies, such as the Australian Dollar, are much lower in this environment.

Headline month-on-month US CPI for August came in at 0.1% instead of -0.1% anticipated and against a flat number for July. The year-on-year figure was 8.3% rather than 8.1% forecast and 8.5% previously.

Excluding food and energy - volatile items that can obscure larger trends - month-on-month US CPI was 0.6% as opposed to 0.3% that was expected and seen in the prior month. The annual read came in at 6.3% instead of 6.1% versus 5.9% previously.

The result of this is that inflation may not have peaked, which was the markets' perception going into the data. Prior to the release, the market was looking for a Fed hike of 75 basis points (bps) next week, followed by a hike of 50 bps, then 25 bps. That rate path has been thrown out the window and is changing by the minute.

Higher rates for longer are now being priced in. This pumped-up yields across the entire Treasury curve. Most notably, the 1-year note ratcheted up 23 bp to be over 3.9%, a level not seen since the tech wreck in 2001.

In the Australian context, the equivalent 1-year Australian Commonwealth Government Bond (ACGB) has traded over 3.0% today, a level not seen since 2012.

The RBA have a more daunting path to tread, not least because of the escalating political pressure from those that have less understanding of monetary policy than they ought to.

Australian CPI is released quarterly, rather than monthly. Australia and New Zealand are the only two countries in the G-20 where this is the case.

The next inflation data print for the RBA will not be until 26th October which is 3-weeks after the next cash rate decision.

Comments from RBA Governor Philip Lowe last week suggested a possible deceleration in rate hikes. Global central banks appear to be re-accelerating toward tighter policy and the RBA’s hand might be forced by external factors.

The futures market is uncertain of a 25 or 50 bps lift at the 4th of October monetary policy meeting.

From an investment perspective, higher yields on a ‘risk free’ bond become a more attractive option from a risk/return perspective.

AUD/USD is languishing near 2-year lows, and this could help to offset some of the impact of negative sentiment toward some the companies within the ASX 200.

The miners gain as they receive US Dollars for their exports, while debt dependent companies face potentially higher costs of borrowing from overseas.

The following charts highlight the global maelstrom that the ASX 200 is caught up in, rather than an index specific issue. 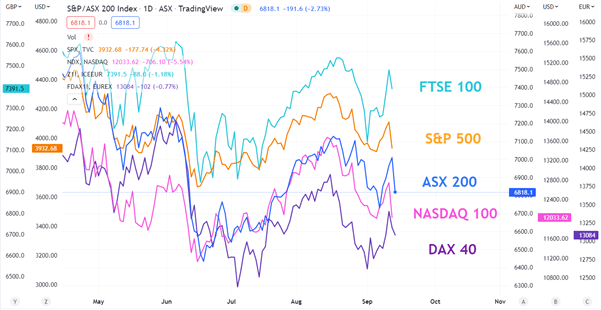 ASX 200 AND AUD/USD AGAINST COMMODITIES 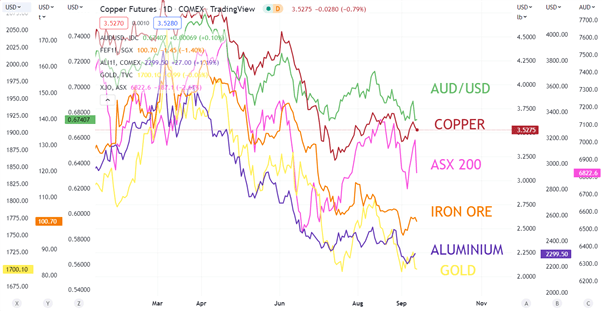 The ASX 200 has moved below several break points today and the price movement created a Bearish Engulfing Candlestick.

The move lower also broke below the 10, 21-, 55- and 100-day simple moving averages (SMA) and may indicate that bearish momentum is evolving.

The price was unable to overcome the 260-day SMA on the recent rally. Just below it is a break point and two previous peaks that may offer a resistance zone in the 7130 – 7150 area. 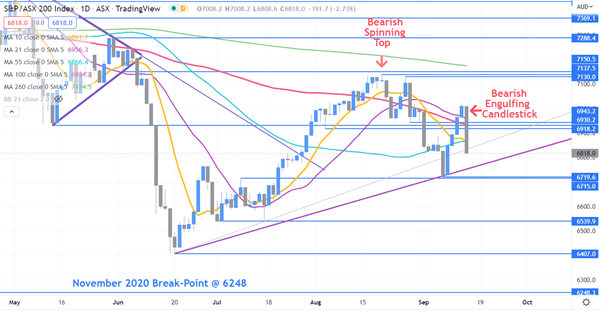