The British Pound suffered heavy losses through the first quarter of 2022. GBP/AUD dropped more than 10% from its January peak before hitting multi-year lows in April. The British Pound looked well-positioned to continue gaining against the Australian Dollar. The relatively dovish Reserve Bank of Australia (RBA) put the Aussie Dollar in a vulnerable fundamental position against the Bank of England.

Through the second quarter, GBP/AUD lost much of its directional bias, instead trading largely within a range between 1.7200 and 1.7800. The RBA surprised markets in early June with a much larger-than-expected rate hike of 50-basis-points (bps), putting the cash rate at 85 bps. A portion of the RBA’s tightening has already been front-loaded. While more rate hikes lie ahead, the calculus of those hikes has softened. That can be viewed through the reduction in delta for the RBA’s September rate hike, evidenced in the chart below that displays the implied rate change for the September meeting.

Meanwhile, the BOE’s projected rate change has increased through May, although it began to track lower alongside the RBA’s equivalent. Still, assuming the RBA's policy has been front-loaded, it is reasonable to assume that the Australian central bank's rate path may continue to ease at an accelerated rate versus the Bank of England. This could give the Sterling a proper footing to climb higher against the Australian Dollar.

Moreover, Europe is looking at a potential energy crisis this winter as Western sanctions against Russia continue to plague Europe’s energy markets, specifically natural gas. BOE policymakers may be keen to do all that they can to temper demand before that occurs. It is difficult for central banks to combat energy-related cost shifts, but a reduction in consumer demand does have modest effects on energy needs. Altogether, the stage looks set for GBP/AUD to unwind some of its first-quarter losses. In summary, my Q3 top trade is long GBP/AUD. 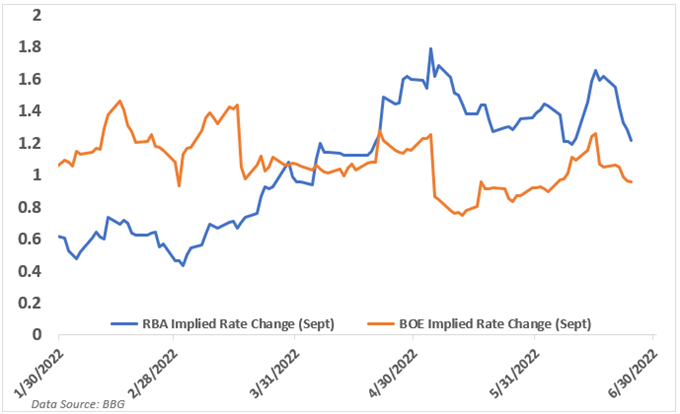