Australian Dollar Bounces on Hawkish RBA but Iron Ore Weighs. Where to for AUD/USD?

The Australian Dollar is steady after the RBA spent the morning in broadcast mode.

It’s been a busy day for the RBA’s media department, with the publication of their review into their yield curve control (YCC) program, Governor Lowe giving a speech and the June monetary policy committee meeting minutes being released.

Dr. Lowe was speaking at an American Chamber of Commerce event in Sydney. He essentially reinforced the main points of the YCC review and re-iterated his comments from last week.

Most notably, the RBA expects that inflation will hit 7% in the December quarter and that the cash rate could be at 2.5% later this year.

The YCC program was infamously abandoned by the RBA in November 2021 when underlying conditions and consequent market forces simply overwhelmed its purpose.

The RBA recognise that YCC had problems and that the bank suffered reputational damage as it exited the program. Most notable was the volatility in markets when the targeting of a yield in a specific bond was no longer warranted from a fundamental perspective.

The bank noted that a key problem arose due to the time guidance that had been given by the bank for an exit to YCC in 2024. Economic growth improved at a faster pace and to a higher level than had been anticipated when the policy was implemented.

When it comes to inflation, Dr Lowe highlighted 3 factors that the bank believes will bring inflation back toward their 2-3% target next year:

These are all feasible possibilities, but they could also turn out to be problematic. At the very least, the only thing a central bank can control is the demand side of inflation. The RBA have made it clear that policy is being tightened to achieve this.

The Australian Dollar is facing other headwinds this week. Iron ore prices have tumbled along with many other industrial metals. Iron ore futures on both the Singapore Exchange (SGX) and the Dalian Commodity Exchange (DCE) are down around 20% from their April peaks.

This is due to pessimism about China’s zero-case Covid-19 policy that is undermining economic activity in the world’s second-largest economy.

China’s property market remains mired in uncertainty due to sudden lockdowns despite efforts from Beijing to provide policy support. 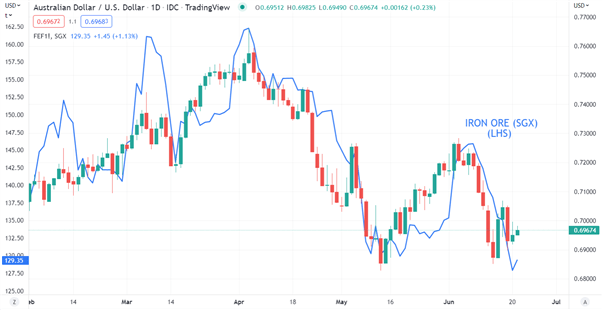