The US Dollar has found broad-based support since the middle of last year. The DXY index remains at 20-year highs but this largely a reflection of Euro and Japanese Yen weakness.

The commodity bloc currencies of AUD, CAD, NOK and NZD have fared a lot better and are still a long way from the lows seen against USD at the outbreak of the pandemic.

None the less, the recent rise of the ‘big dollar’ has seen the commodity linked currencies impacted. This is despite the massive increases in the underlying export commodity prices since the Russian invasion of Ukraine.

The USD/CNY exchange may have a lot to with this USD strength over the last few weeks and could provide clues for further moves.

The Japanese Yen depreciated significantly in March and through to the end of April. Although many Japanese government officials talked about their ‘concern’ for FX volatility, a weaker Yen was seen as a positive for their policy goals.

A problem arose when the CNY/JPY cross rate hit its highest level since the early 1990s near the end of April. China and Japan are the second and third largest economies in the world by GDP respectively. They are within close geographic proximity. 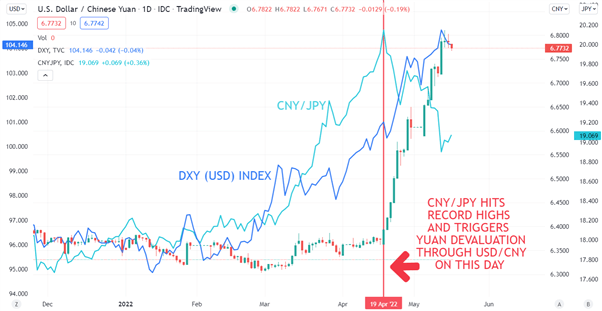 The impact of this fairly sudden appreciation in China’s currency against that of one of its major trading partners has led to the Peoples Bank of China (PBOC) devaluing the Yuan against the US Dollar.

The moment this unfolded, the Yen’s weakening decelerated against the US Dollar, and to a lesser extent, against the Euro. However, regional Asia-Pacific currencies devalued against the Dollar as well, particularly IDR, INR, KRW, MYR, SGD, THB and TWD.

The commodity bloc also sank. Future moves for these currencies may depend on Chinese officials and how far they are prepared to devalue the Yuan.

The fundamental backdrop for the Chinese economy remains challenging due largely to the zero-tolerance Covid-19 policy that continues to plague optimism.

Chinese policy makers are pulling on several levers in an effort to stoke growth, but the exchange rate appears to be the weapon of choice for now.

Further acceleration in Yuan depreciation could trigger bouts of weakness across many currencies against the US Dollar.

The USD/CNY exchange rate might be exasperated by any resumption of Yen weakness to the Dollar. This inter-dependency of currency pairs may have further to play out.