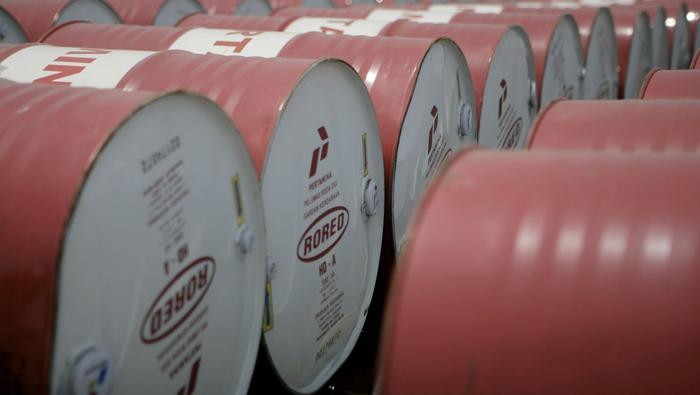 Crude oil prices may rise if the US and Iran are not able to reach a consensus on a de-nuclearization deal. Technical analysis of the Brent benchmark seemingly supports the case for gains, though the prospect of slower growth in China could offset bullish geopolitical catalysts. Fundamentally, the question now is: which force will have more push in the current environment?

IRAN(NING) AWAY FROM THE NUCLEAR DEAL?

Officials from Tehran, Washington, and Tel Aviv continue to debate the terms of the hotly contested Joint Comprehensive Plan of Action (JCPOA). Colloquially, this is known simply as the “Iran nuclear deal”. After the most recent round of talks in Vienna last month, negotiations appeared to have stalled over several key issues.

One of the biggest sticking points is removing the US’ Foreign Terrorist Organization (FTO) designation of Iran’s Islamic Revolutionary Guard Corps. According to a senior diplomat, the prospects of Iran and the US coming to an agreement are “slim to none”. With more time passing, the likelihood of an agreement seems to become increasingly less likely.

United States Secretary of State Antony Blinken echoed this sentiment in early April: “I would say simply that I’m not overly optimistic at the prospects of actually getting an agreement to conclusion…. I continue to believe it would be in the best interests of our country if we can get back into compliance with the deal, if Iran will do the same. We’re not there.”

With talks paused as of last month, it is unclear whether multilateral negotiations will continue or an official end to discussions will be announced. However, Israel and the US will hold strategic bilateral talks this week on the subject. Israeli National Security Advisor Eyal Hulata will be meeting his counterpart, Jake Sullivan, in Washington.

The White House “definitely worries” that Iran could have nuclear-capable weapons within only a matter of weeks, with the threat of escalation increasing at a commensurate rate. Officials are concerned that without a deal, and already many sanctions imposed, there are insufficient further levers to push Iran toward an accord.

Indeed, there are seemingly few carrots the US can use to incentivize Tehran to back down from its steep demands. Washington’s “maximum pressure” campaign during the former Trump administration has not only entrenched Iran’s hardline position, but inadvertently pushed it into the arms of a key strategic rival: China.

Tehran and Beijing signed a 25-year agreement that would lead to over $400 billion of investments flowing into Iran in exchange for discounted oil prices to China. A deeper relationship with the East Asian giant seems to be seen as offering the Islamic Republic greater stability and potential for economic progress than the West can provide. Iran could also be freeer to pursue an aggressive regional agenda.

Crude oil prices may therefore spike if the US and Iran walk away from negotiations. Without an incentive to behave, Tehran may be bolder in its foreign policy, potentially exacerbating geopolitical instability. That is likely to increase oil supply disruption risk in a world that is already petroleum-parched.

China’s “zero COVID-19” policy has led to numerous cities locking down, with some extreme cases of fencing residents in their apartment buildings. Key financial and manufacturing hubs like Shanghai and Shenzhen have been hit hard by the preventative measures. Unsurprisingly, this has undermined economic activity and weakened the growth outlook.

In March, retail sales fell 3.5 percent, 0.5 percent more than what economists had been expecting. Slow growth as a trend is expected to hit countries like China that accumulated a significant amount of debt during the pandemic particularly hard. This comes on top of financial stress at large Chinese property developers like Evergrande, an ever-present thorn in China’s financial side in recent months.

As World Bank President David Malpass highlighted last week, over the next several years, deleveraging may shave off 1.3 percent in emerging markets’ domestic output. The problem of high debt - e.g. leveraged loans, and sophisticated financial instruments - has become a greater concern among policymakers, especially with higher interest rates on the horizon.

With weaker activity out of two-thirds of China’s top 3 most populous cities, oil consumption is expected to fall. Approximately 4% of China's demand comes from Shanghai alone. Beijing’s strict policies thus seem likely to depress growth and reduce demand from a top-2 global oil consumeras a result.

Crude oil prices appear to be forming a continuation pattern known as a Symmetrical Triangle. It is characterized as a period of consolidation with lower highs and higher lows, which ultimately narrows until a decisive break is made. In this model, the direction of the burst is predicated on the preceding trend. In this instance, the analysis suggests a bullish bias. 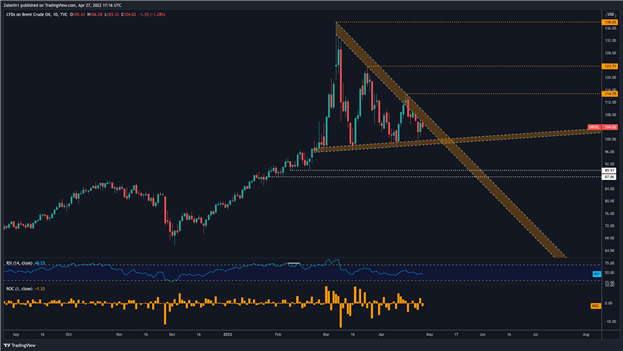 However, it should be noted that these models are not prophecies. Brent’s breakout – either above descending resistance or rising support – is needed to decisively reveal the trend to follow. Technical confirmation - meaning, puncturing either layer and holding on the other side of it on a daily closing basis – could precede a bigger, accelerated move thereafter.

Given the fundamental circumstances under which this pattern formed and the uptrend that it emerged from, the outlook for Brent from a technical perspective appears bullish. Three potential layers of resistance are at prior high points along descending resistance at 114.79, 123.71, and 138.03, respectively. These levels will be crucial to monitor if the outcome is a jubilant ascent.