WTI crude and Brent crude oil prices rocketed higher in the first quarter of the year as Covid-related lockdowns and restrictions were rolled back across major economies, fueling a surge in demand. That increase in demand quickly outpaced rising supply levels. Then, in February, Russia invaded Ukraine. A volley of Western sanctions followed, effectively severing Russia’s connection to global financial markets. The United States and Britain moved to ban Russian oil exports, although the European Union refrained, fearing an energy crisis.

Still, the confusion around quickly evolving sanctions as well as the removal of Russian banks from the SWIFT messaging system has made buyers and foreign shippers hesitant to take delivery from Russian ports. Although not formally targeted by much of the Western alliance, Russia’s oil industry, which supplies around 10 million barrels per day to the global market, was thrown into chaos. Oil prices responded with Brent crude oil hitting its highest level since 2008.

However, there is potential for a near-term pullback even as demand around the world picks up. That pullback may come if Ukraine and Russia negotiate an end to the war. Such negotiations could lead to a removal of some Western sanctions, potentially reopening the taps on Russia’s energy products, at least to a degree. Outside of the supply factor, an end to the war would also remove the geopolitical risk premium in prices. 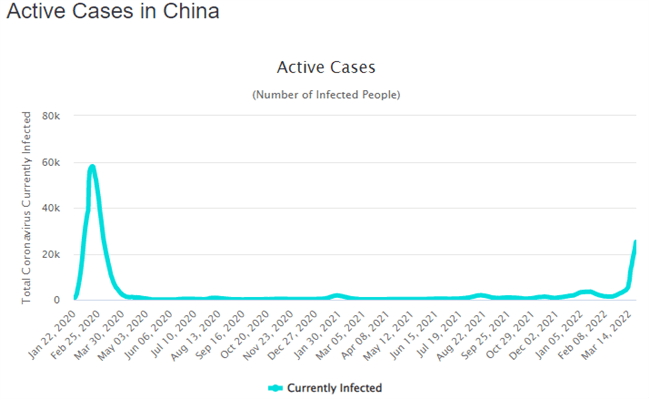 There also exists a chance that the energy market’s demand-side may ease due to a Covid outbreak in China. A drop in demand for Asia’s largest oil consumer would likely be followed by a contraction in imports, easing pressure on strained supply capacity. China is reportedly soaking up some of Russia’s new spare capacity, but it still sources much of its oil from other countries.

The Beijing auto show that was scheduled for late April was canceled amid China’s worst Covid outbreak since the pandemic began. Other major events in China are likely to suffer the same fate until the outbreak is contained. Widespread cancellations would open the door for a pullback, with bearish factors compounded by the chance for a more aggressive 50 basis point rate hike from the Federal Reserve in May.