Crude Oil Prices Spike and Drop On Evolving Ukraine News. Where to for WTI?

Tensions around the Ukraine border initially eased when Russia declared that they had started moving their troops back to their home bases. However, US intelligence has just recently said that this is not the case and that there are more troops heading to the area.

Secretary general of NATO Jens Stoltenberg said that there is no evidence of de-escalation and that Russia was building up troop numbers. The Kremlin denied the allegations but US Secretary of State Antony Blinken backed up the claims.

This is at a time when a large cyber-attack has been mounted on Ukraine institutions. There is debate currently under way to determine if this is an act of war.

Volatility looks set to accelerate for crude going into Asia on Thursday.

Data from the EIA/DOE overnight showed oil inventories have surprisingly risen over the week by 1.1 million barrels, when the market was expecting a drop of 1.6 million.

This, and the possibility of a deal with Iran saw prices soften.

Backwardation remains in play in the oil market, indicating that an easing of demand doesn’t appear likely in the near term despite an easing of prices so far today.

Backwardation is when the contract closest to settlement is more expensive than the contract that is settling after the first one. It highlights a willingness by the market to pay more to have immediate delivery, rather than having to wait.

At the time of going to print, the WTI crude oil futures market is currently paying a premium of around US$ 1.74 bbl to have immediate delivery. On Tuesday it nudged just over US$ 2 bbl, just below the peak of US$ 2.19 earlier this month, which was the highest since July 2018. 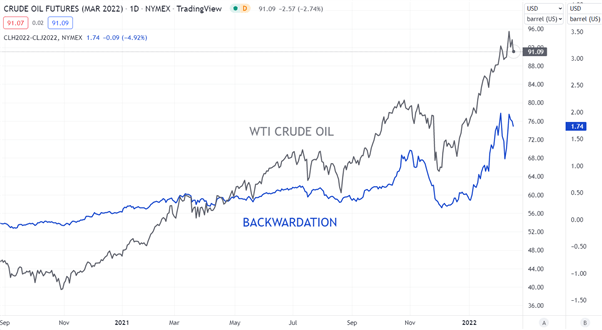 WTI crude oil traded at its highest level since October 2014 on Friday.

That high included a close outside the upper 21-day simple moving average (SMA) based Bollinger Band. Once it moved back inside the band, the price has depreciated.

While has just moved below the 10-day simple moving average (SMA)it remains above the 21, 55 and 100-day SMAs. This could indicate short pause in bullish momentum, but medium and long-term bullish momentum might be intact.

On the topside, resistance may be offered at the recent previous high of 88.84. 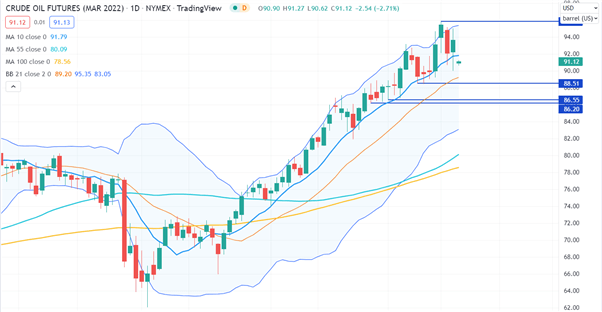