The Yen remains a popular currency in FX markets for many reasons and in this case it’s due to its appeal in the ‘carry trade’. A carry trade exists whenever you have two currencies with diverging interest rate spreads, i.e. one remains low while the other moves higher. This allows a process whereby funds are borrowed in the currency charging the lower rate with the intention of converting those fundsto invest in a currency offering the higher rate of return.

With interest rates in negative territory since 2016, the Japanese Yen emerges once more as a suitable ‘funding’ currency. While most of the developed world grapples with red hot inflation at multi-decade highs, Japan continues in its struggle to achieve higher inflation over the long term, firmly entrenching its negative interest rate regime.

The Pound Sterling has emerged as a suitable counterpart to the Yen as expectations around interest rate hikes gained traction in November of 2021 already. Considering the threat of escalating inflation, the bounce back in the British economy and reasonable employment data after the termination of the Coronavirus Job Retention Scheme, the Bank of England (BoE) decided to raise interest rates by 0.15% to end 2021 at 0.25%.

As of the December central bank meetings, the pace of market-implied rate hikes for Sterling currently outpaces that of US. Although these indications are far from perfect as the global macroeconomic environment becomes ever more responsive to developments around the coronavirus and variants that may emerge. Such shocks are likely to cause market-implied rates to swing drastically.

It must be noted that a possible headwind for the Pound emerged in mid-December when Boris Johnson’s Conservative Party lost a seat in parliament from the North Shropshire, a region that backed the Conservatives for nearly 200 years. While one seat out of the 650 occupied by the Conservatives doesn’t seem like a big deal, the result has been viewed as an indictment on Johnson’s leadership surrounding recent failures. The Conservative Party is no stranger to recalling leaders and doubts have surfaced regarding Johnson’s future as the leader of the party and as British Prime Minister which could weigh on the Pound.

On the technical front, GBP/JPY has previously attempted to break above the 2018 high before reversing sharply towards the support zone between 148.50 and 149.50. The last three quarters of 2021 witnessed higher highs while lows remained anchored around the support zone, failing to make lower lows.

Therefore, a test and bounce off the zone of support could provide a launchpad for another test of the 2018 high at 156.60 with the nearest resistance level appearing at 153.50. 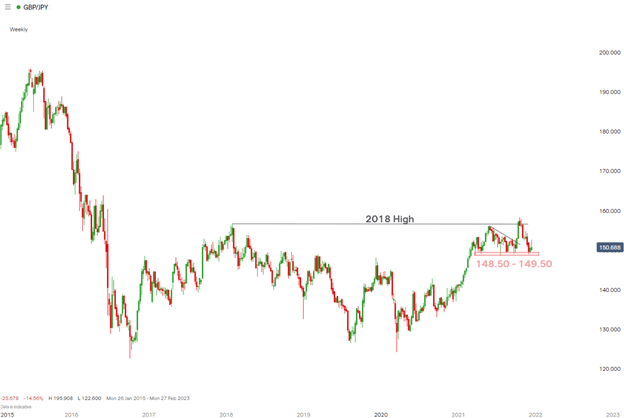 The daily GBP/JPY chart shows how the pair approached the 2018 high just before the monetary policy committee (MPC) was due to meet on November the 4th, which ultimately ended in a somewhat surprising decision to leave rates unchanged despite a rate hike being priced in. The sharp drop was further amplified by the emergence of the Omicron variant, leading to the relatively lower prices hovering around the support zone once more.

Fast forward to today and Omicron fears have dissipated significantly and we have just witnessed the first UK rate hike since the pandemic. Therefore, just like before the November meeting, markets may start to price in the expectation of further hikes which may boost GBP/JPY in the first quarter of next year. 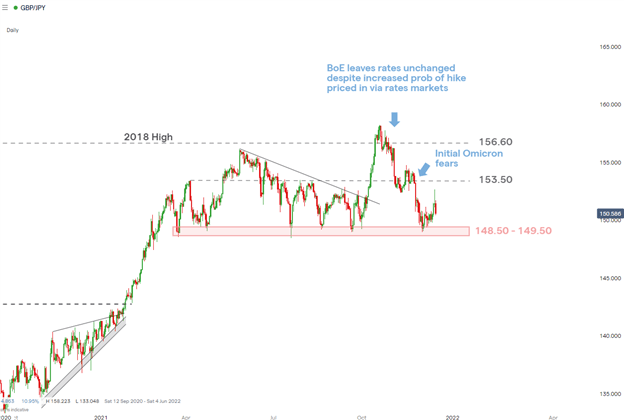