US Dollar and Yen May Rise as Meme Stocks, Coins Warn of Market Excess

Signs of market excess began to emerge prior to the 1929 collapse in financial markets that helped trigger the Great Depression. An old industry adage- one that has become an embedded platitude in stories of financial bubbles – states, “When the shoeshine boy gives you stock tips, sell”.

This principle still appliesin the 21st century, though the occupation and medium of communication is different. TikTokers and other social media influencers are the new digital canaries in the financial coal mine. Fringe assets with no clear-cut fundamental value have surgedduring the pandemic in large part thanks to their encouragement.

These assets include – but are certainly not limited to – shares of GameStop, Bitcoin, and its absurdist descendant Dogecoin. Their spectacular rise can arguably be attributed to four phenomena [not in order of relevance]:

Trading apps like Robinhood have helped to bring a younger demographic of traders to the financial fore. While this is not problematic in and of itself, newer users are often less experienced. When combined with user-optimized interfaces that make it easier to trade, this has led to the general gamification of stocks and trading (i.e. the adoption of a video gaming-like approach to platforms and services as well as to trading itself).

While retail trading was previously associated with an older and more risk-averse demographic, the new paradigm has come to feel more like a game. The influx of younger traders who grew up in a more digital world with these new trading instruments have begun to change the landscape and nature of trading as a whole.

The rush of younger traders has also brought the social zeitgeist with it. Memes are a key feature of this phenomenon. When memes become associated with or take on the form of an asset – Dogecoin is a prime example – the familiarity that this confers, combined with a trading platform presenting investing in a game-like way, has helped push prices higher.

When the pandemic hit, central banks all over the world turned up the credit taps full blast in an effort to avoid a credit squeeze and implosion of the global financial system. While the tsunami of liquidity was met with open arms as a bulwark against credit stress, it has also allowed for rampant speculation. At the end of 2020, the tech-leaning Nasdaq was up over 40 percent and the S&P 500 around 15 percent.

However, these returns pale in comparison to some of the outliers, as introduced above. Besides those already mentioned, this also includes shares of Tesla, whose iconic CEO Elon Musk has helped propel the stock to astronomical heights.

Below we will explore four rather strange assets that have attracted acute attention in mainstream media after initially starting off on the social/financial periphery.

Dogecoin: Who Let the Doge Out?

Dogecoin was created on December 6, 2013 as a joke using the famous Shiba Inu “Doge” meme as the face of the token. For many years it remained a financial pariah until meme culture began to permeate more mainstream conversations and began to be promoted by celebrities and influencers. It’s growing popularity came with the new wave of younger, meme-friendly traders.

Between January 1 and May 7 of this year, Dogecoin rose by a whopping 13,263.9%. Tesla’s Musk compounded the cryptocurrency’s gains after tweeting “Doge” and “Dogecoin is the people's crypto”, sending the digital token up over 60% in one day. What started as a joke has led to a market cap of close to $100 billion and wider-spread adoption in retail trade. 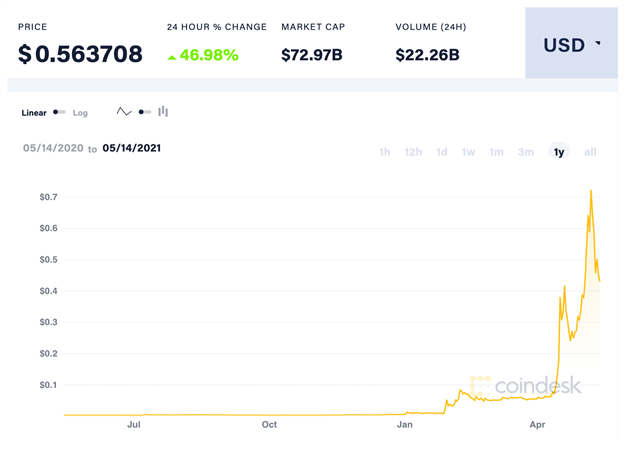 Bitcoin: Another One Bites the Bust?

Bitcoin rose by an astounding 117 percent from the beginning of 2021 through mid-April, peaking at over $64,000 per BTC. The rally reflects wider-spread adoption, particularly among those with a strong social media presence like Mr. Musk. It should be noted: he alone is not responsible for Bitcoin’s rally, but he unquestionably played a readily-apparent role. 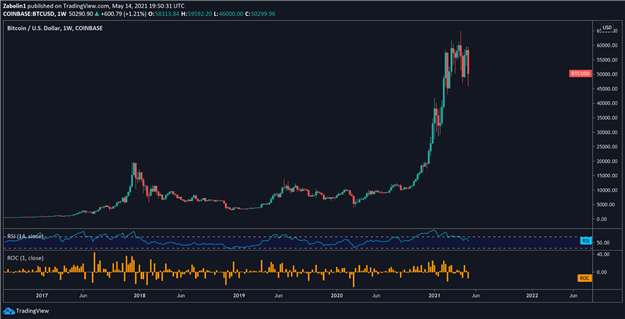 In an ironic twist, the Tesla founder is also the one who has been responsible for BTC’s recent volatility after announcing that the company will suspend vehicle purchases using Bitcoin. BTC/USD subsequently cratered, though growing enthusiasm for it and pervasive risk appetite will likely keep it afloat for the foreseeable future.

GameStop: Stonks Only Go Up

Gamestop (GME) became famous after what was once described as “the most shorted stock in financial markets” famously turned around and rose over 2,200 percent in less than two weeks. The subreddit thread r/wallstreetbets was the social catalyst, with a redditor named “Roaring Kitty” subsequently testifying before Congress about the stock’s astounding spike. 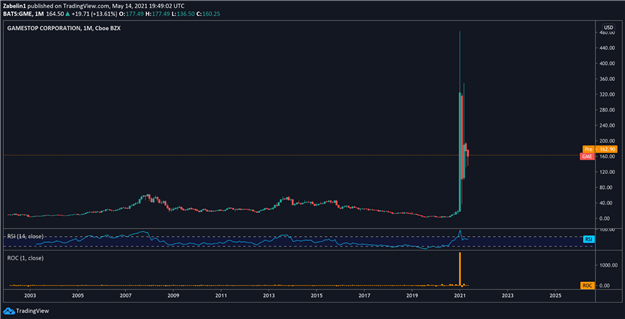 The short squeeze that it caused rippled out into broader equity markets and led to general convulsions in benchmark indices like the S&P 500. If ever there were ‘traditional’ signs of market excess or irrational exuberance, the spectacular rise of GME and the popular phrase “stonks only go up” surely look like them (if not a newly-formed financial archetype).

The US Dollar and Japanese Yen may be the preferred choice for volatility-shocked investors who at the time may be prioritizing liquidity over returns. Recent bouts of extreme market turbulence - like in 2008 and 2020 – have seen JPY and USD rise against a basket of G10 and EM FX counterparts.

While past performance is not indicative of future results, history sure does seem to rhyme. The Yen and Dollar have a tendency to rally even during shallower bouts of uncertainty and brief spikes of volatility. More of the same is probably in the cards if a collapse in meme assets ripples out into the broader financial markets. 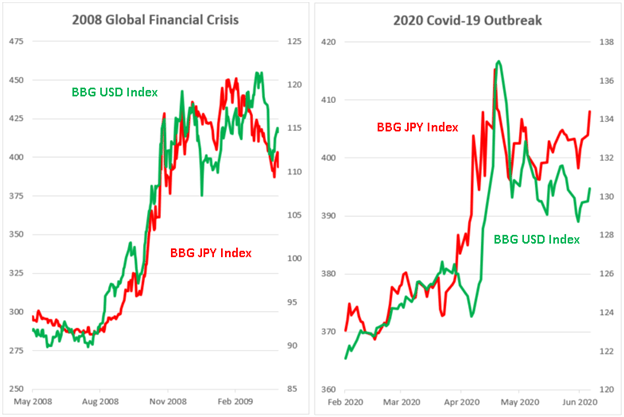