S&P 500 May Rise Further, Fed-Treasury Affray Brushed Aside for Now

Treasury Secretary Steven Mnuchin sent a letter to the Federal Reserve Chair Jerome Powell at the end of last week. He requested the return of some $430 billion in unused emergency lending funding from the Cares Act. The move by the Treasury took many off-guard as the earmarked funds may not be extended after the end of this year.

The Federal Reserve (Fed) issued a statement in response to the Treasury’s request and highlighted the need for the funds to be available. However, in line with the Cares Act and Federal law, the central bank is complying with the request. The return of these unallocated funds will go to the Treasury’s General Account, effectively ending new lending in the facilities.

Recommended by Thomas Westwater
How can central banks impact markets?
Get My Guide

What are the Risks to Markets from this Squabble?

While underutilized, fears swirled following the news. For now, however, financial systems and markets appear to be functioning normally. This is likely due to the already overwhelming amount of support the Fed is providing through other tools and measures. Still, removing the unused funding risks leaving financial markets without an immediate backstop, perhaps raising volatility risk down the road. The Fed may find creative ways to fund emergency facilities if needed, however. One route is possible through open market operations.

That could be the case if an unexpected shock to the financial system occurs down the road. The Thanksgiving holiday also has health officials worried about a spreader event. A further uptick in Covid cases is thought to be likely. Still, the impact on the financial sector should be limited given existing support from the Federal Reserve.

Furthermore, the incoming Biden administration has tapped former Fed Chair Janet Yellen to lead the Treasury Department. The change in leadership at the Treasury opens the door to these funds returning to the Fed's tool bag. Legal experts propose that Yellen may be able to roll back Mnuchin's move and restore these funds under the prior agreement.

Still, legal implications are far from clear, but at current standing, it does seem to be an option on the table for the incoming administration. If so, it would signal renewed cooperation between the two agencies and perhaps boost confidence in markets further.

As previously mentioned, markets were largely undisturbed following the news. The S&P 500 and the Dow Jones Industrial Average have proceeded to higher ground this week. The Fed’s quantitative easing program continues to reassure markets at the current pace of $120 billion per month. The central bank’s balance sheet now tops $7.2 trillion. Liquidity also appears to be functioning without worry as the haven-linked US Dollar is approaching its lowest level since early 2018. Further losses could be in store for it given the cooldown in volatility.

Moreover, the Nov 4-5 FOMC minutes hinted that the central bank may soon choose to target longer-dated maturities in the current round of QE. For now, their monetary policy stance should be seen as sufficient to support markets. Nonetheless, traders would be wise to keep their eye out for any further developments between the Fed and Treasury Department.

Recommended by Thomas Westwater
Don’t give into despair, make a game plan
Get My Guide 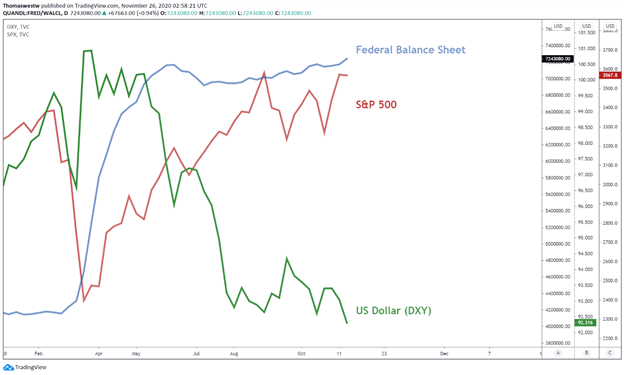