The anti-risk US Dollar extended its slide against ASEAN currencies such as the Singapore Dollar, Indonesian Rupiah, Malaysian Ringgit and the Philippine Peso last week. The Indian Rupee also managed to gain ground against the USD – see chart below. It was a relatively light week for economic event risk, both in the ASEAN region and externally.

Recommended by Daniel Dubrovsky
What is the road ahead for USD in Q3?
Get My Guide

As such, the focus for the Greenback against currencies from developing markets remained on risk trends. A deterioration in market mood into the end of last week likely trimmed USD weakness. External factors, such as worse-than-expected US initial jobless claims and escalating US-China tensions, may have played a role here. The latter two nations exchanged threats to close consulates in Houston and Chengdu.

Despite these developments, the MSCI Emerging Markets Index (excluding China) ended last week higher – see chart at end of the article. Lately, my ASEAN-based US Dollar index seems to have been paying more attention to this gauge of sentiment in developing economies. 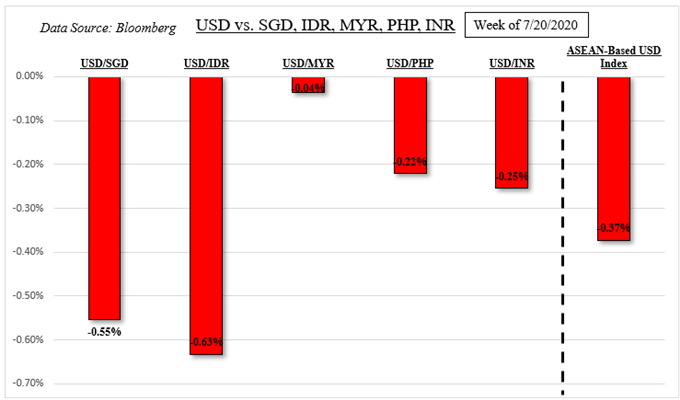 The week ahead is filled with event risk from the world’s largest economy. Traders often look to developments from the US to gauge the outlook for global growth, thus impacting overall market sentiment. The Federal Reserve is expected to leave benchmark lending rates unchanged at near-zero levels. The focus will likely be on Chair Jerome Powell for the central bank’s assessment on growth and plan for accommodation.

The latter has been somewhat fading as of late, with growth in the balance sheet notably slowing and market volatility ebbing. All eyes then turn to second-quarter US GDP data on Thursday as the economy is expected to enter a technical recession for the first time in about 13 years. That may already be priced in however. As such, absent a material miss/overshoot relative to expectations, ASEAN currencies may be focused elsewhere.

That may be on the ongoing earnings season, and specifically on results from tech companies. So far, key players such as Netflix and Microsoft have disappointed, which resulted in their stocks falling. What has arguably been driving a lot of the euphoria in financial markets is this sector, making it increasingly harder for these businesses to defend their relatively elevated stock valuations.

Similar disappointing data from Alphabet, Amazon, Apple and Facebook this week could shift the tone in market sentiment, perhaps boosting the US Dollar if the Nasdaq Composite falls. This could be counterbalanced by what is expected to be further fiscal stimulus from the US. The extra $600/week unemployment benefit is going to expire at the end of this month. It seems like this will be trimmed going forward, but the question is by how much?

Focusing on the ASEAN economic docket, it is still fairly light, absent certain exceptions. Official Chinese manufacturing and services PMI readings are due on Friday. China’s performance can often imply knock-on impacts for its ASEAN neighbors, thus driving SGD, IDR, MYR and PHP. US-China tensions have also been heating up and further spats could amplify risk aversion. Malaysia will update its latest trade statistics on Tuesday as Singapore updates its unemployment rate the next day.

At the end of last week, the 20-day rolling correlation coefficient between my ASEAN-based US Dollar index and the MSCI Emerging Markets Index, excluding China, (EMXC) stood at -0.86. Values closer to -1 indicate an increasingly inverse relationship, though it is important to recognize that correlation does not imply causation.