The anti-risk US Dollar traded lower against its ASEAN counterparts last week such as the Singapore Dollar, Malaysian Ringgit, Indonesian Rupiah and Philippine Peso. This is as market mood cautiously improved globally and around the Asia Pacific region. The latter was particularly bolstered as China cheerlead local stock markets.

Recommended by Daniel Dubrovsky
What is the road ahead for USD in Q3?
Get My Guide

The Singapore Dollar traded flat following a general election, as expected. The ruling People’s Action Party (PAP) maintained its grip on power, setting the stage for a status quo policy approach. In the Southeast Asia region, the Indian Rupee experienced its worst week in 3 months (see chart below). 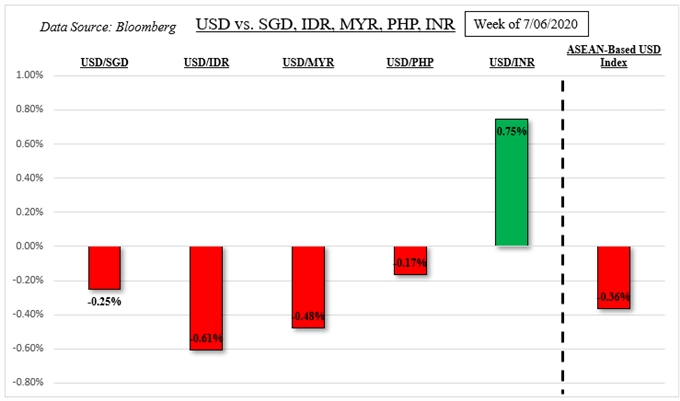 On the next chart below, my ASEAN-based US Dollar index continues to track inversely the MSCI Emerging Markets Index (EEM). As such, the trajectory for USD against ASEAN FX will likely continue being influenced by market sentiment. However, it should be noted that while EEM set higher highs recently, an index that leaves out China but is otherwise identical did not. About 42% of EEM is exposed to Chinese assets.

Perhaps a reason why USD did not materially depreciate further against ASEAN FX is a lack of confidence in the forces that caused Chinese shares to rally. EEM rose over 8.2% these past two weeks, while the one excluding China rose roughly half as much. A large portion of gains in the former were arguably triggered when state-run Securities Journal underscored the importance of fostering a bull market.

With that in mind, perhaps investors are hesitant to commit further capital to currencies like the Singapore Dollar and Malaysian Ringgit until more insight is known into the state of global growth. This week, relatively elevated US stock valuations will begin to be tested as the second-quarter earnings season gets underway, with major financial companies like JPMorgan and Wells Fargo reporting.

On the whole, economic data out of the US continues to outperform relative to expectations. This may open the door for rosy retail sales and consumer confidence figures. But at the same time, these could be overshadowed by rising coronavirus cases that may increase the likelihood that states and counties will take bolder actions to reimpose lockdowns. Risk aversion would likely bolster the US Dollar.

All eyes will turn to the world’s second-largest economy, China, at the end of the week. After a -6.8% y/y GDP contraction in the first quarter, growth is expected to clock in at 2.2% in the three months through June. A sharp rebound would likely fuel expectations of a swift V-shaped recovery. This could also imply positive knock-on spillovers for the neighboring ASEAN region.

Singapore will also be releasing GDP for the same time frame, but earlier in the week on Tuesday. The city-state’s economy is anticipated to shrink -11.3% y/y, down from -0.7% prior in Q1. While this may be a source of near-term volatility for USD/SGD, the path forward will likely depend on risk trends. Chinese trade data is due on the same day, with Indonesia and India releasing theirs on Wednesday.

At the end of last week, the 20-day rolling correlation coefficient between my ASEAN-based US Dollar index and the MSCI Emerging Markets Index (EEM) stood at -0.55. Values closer to -1 indicate an increasingly inverse relationship, though it is important to recognize that correlation does not imply causation.