Stocks in the S&P 500, Dow Jones and Nasdaq have ripped higher by about 35% since bottoming mid-March. The relentless stock buying bonanza over recent weeks has propelled popular US equity benchmarks within striking distance of their all-time highs notched earlier this year.

For instance, the tech-heavy Nasdaq now rests a mere 1.3% away from its 18 February 2020 close at the 9,720-price level after an astonishing recovery from one of the sharpest stock market selloff in modern history. This compares to an equally impressive, though not as strong, rebound notched by the S&P 500 and Dow Jones, which trade about 9% and 13% below their record highs, respectively. 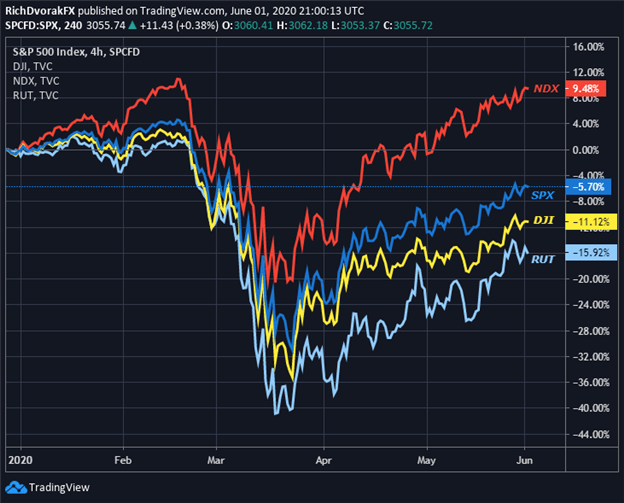 Unprecedented amounts of central bank liquidity and government stimulus have flooded markets to shore up sentiment and combat economic fallout from the coronavirus pandemic. An expanded FOMC arsenal, like the Fed backstop for high-yield corporate debt, combined with trillions of dollars in Treasury purchases, stand out as two overarching drivers that have fueled the eye-popping surge in stock valuations to levels last seen during the dot-com bubble nearly two decades ago.

This has largely allowed the S&P 500 Index to defy the gravitational pull lower from collapsing stock market earnings. The incredible comeback by stocks looks increasingly out of touch with reality, however, as investor complacency builds and unwavering risk appetite crushes volatility. 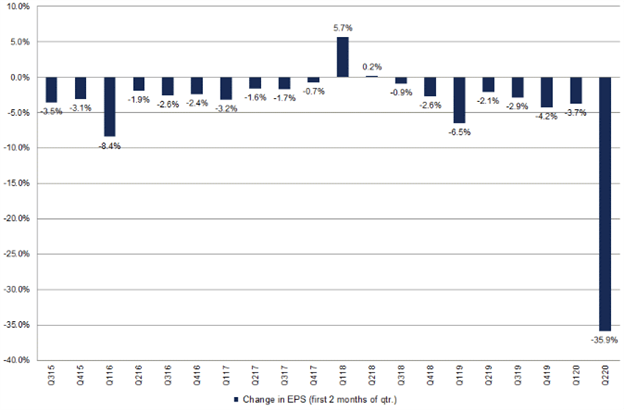 In addition to S&P 500 EPS estimates freefalling, the number of unemployed grows by the millions every week, and layoffs do not look temporary on balance as job losses mount. Also, after spending months in lockdown to stop the coronavirus from spreading, which paralyzed the global economy and caused 1Q-2020 US GDP to collapse by a staggering 5%, Americans now gather by thousands amid violent protests over the death of George Floyd across major cities like Minneapolis, Los Angeles, and Chicago.

Not to mention, as US-China tension escalates in the wake of the coronavirus pandemic, Washington and Beijing have lobbed increasingly terse remarks back and forth over recent weeks, which also follows the alleged blow to Hong Kong autonomy due to the latest national security law imposed. Though details from the Trump-China presser last Friday revealed little appetite from the White House to impose fresh tariffs or scrap the phase one trade deal.

This provided a solid boost to stocks and other pro-risk assets like the Australian Dollar. The move might prove short-lived, however, considering reports over the weekend that Chinese officials, in a rebuke to Trump, told top state-run agricultural firms to shy away from purchasing American farm goods like soybeans.

Furthermore, the economic calendar indicates that several heavy-hitting data releases are expected this week, like PMI reports and nonfarm payrolls, which have potential to catalyze a deterioration in market sentiment. While increasingly less-horrendous data readings might provide a reason for optimism, and perhaps support higher stock prices, it is difficult to dismiss the fact that over 25 million Americans are unemployed and look past the secondary ‘domino effect’ on consumer confidence, savings, and consumption.

Correspondingly, while investors overlook the aforementioned bearish headwinds,S&P 500 price outlook seems progressively skewed to the downside as the stock market index fluctuates around astronomically high valuations. Stocks could continue marching higher, however, in light of the trending market and absence of a catalyst that carries enough impetus to ignite a reversal. Nonetheless, it seems increasingly likely the S&P 500 might succumb to a perilous fate if a day of reckoning dishes complacent investors a healthy serving of economic reality.

Read More – Stock Market Forecast: Should I Sell in May and Go Away?